COVID-19 has ignited the debate over gun rights as states grapple with whether to allow gun sales while other retailers are forced to shutter.

Stores selling guns and ammunition remain legally open in 45 states that include sellers and manufacturers as essential services that are exempted from orders shutting down most commercial activity or have no such orders.

In Nevada, a state statute explicitly prohibits a governor from using emergency powers to impose “additional restrictions as to the lawful possession, transfer, sale, carrying, storage, display or use” of guns and ammunition.

In states where governors or local officials have ordered stores closed, the National Rifle Association and its allies have sued, saying the orders restrict Second Amendment rights.

Although every preliminary judicial decision so far in cases targeting state stay-at-home orders has gone against gun advocates, there are indications the aggressive legal strategy is affecting policy. The Pennsylvania Supreme Court ruled in the state’s favor, but Gov. Tom Wolf, a Democrat, later revised his order to allow gun stores to open on a limited basis. Fellow Democratic Govs. John Carney of Delaware and Phil Murphy of New Jersey also revised their states’ orders to allow gun sales.

Orders in Michigan, Massachusetts, New Mexico, New York and Washington still require gun stores to close while stay-at-home orders are in effect. Gun-rights groups have sued in three of those states, but not in Michigan or Washington.

Adam Kraut, the director of legal strategy at the Firearms Policy Coalition, a gun rights group that has sued over other orders, said the group hasn’t found suitable plaintiffs in those states who were forced to close by authorities.

“There are discussions going on right now around gun shops and ranges, in addition to other businesses, on whether to deem them essential,” he said.

The state has not brought enforcement action against any gun stores, he said.

Groups have also sued Virginia for closing indoor shooting ranges and Georgia state courts for pausing the issuance of licenses to carry guns.

Other constitutionally protected businesses, like bookstores that are protected by the First Amendment’s right to free speech, have not been exempted from closure, said Eric Tirschwell, the managing director of Everytown Law, the litigation arm of the Mike Bloomberg-backed gun control group Everytown for Gun Safety.

“These orders are so broad and so general and not targeted at guns or gun stores,” Tirschwell said. “Our view is that in that framework there’s no constitutional violation. … The Second Amendment doesn’t require the government to give them special status.”

The NRA says gun stores aren’t analogous to bookstores because books can be ordered online and delivered to a home, but guns generally cannot legally be shipped anywhere but to a licensed dealer, said Amy Hunter, NRA’s director of media relations.

The Department of Homeland Security’s Cybersecurity and Infrastructure Security Agency added gun manufacturers and retailers to its definition of essential services in a March 28 document revising a memo that had left them off.

New Jersey’s Murphy tied his decision to the change in federal guidance.

“It wouldn’t be my definition, but that’s the definition at the federal level and I didn’t get a vote on that,” he said at a March 30 briefing.

The change in guidance and other federal policy changes drew criticism from gun-control advocates.

After the U.S. Bureau of Alcohol, Tobacco, Firearms and Explosives earlier this month allowed federally licensed gun stores to sell guns to buyers in their cars in order to comply with social distancing guidelines, the gun-control group Guns Down America found there were 100 times more sites for curbside gun sales as mobile testing site for the coronavirus, said Igor Volsky, the organization’s executive director.

Gun sales have risen during the pandemic. 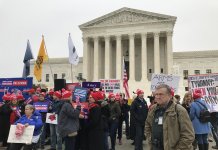 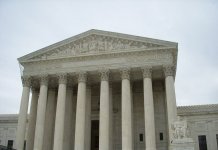