Prison inmates are making face masks for others to use, but they have limited access to use them to protect themselves.

Nevada Department of Corrections Chief Medical Officer Dr. Michael Minev told the Interim Finance Committee on Thursday that prison inmates are receiving face masks when they are being transported from an NDOC facility to another place, but that masks have not been supplied to all inmates in the state’s custody.

The face masks being used by inmates during transport are 50 percent cotton, 50 percent polyester and manufactured by inmates in the state-run “prison industries” program. NDOC has a limited supply of surgical-grade N95 masks but is reserving them for use with confirmed cases, according to Minev.

Republican Assemblywoman Robin Titus, a medical doctor, noted that cloth masks are effective at stopping the person wearing them from spreading the virus but inadequate for protection when encountering someone who is not wearing a mask.

“We can’t afford one inmate getting this virus,” she added. “Please reconsider how you’re protecting them.”

Titus was one of several legislators on the Interim Finance Committee to press NDOC for details on how it’s protecting inmates.

NDOC Director Charlie Daniels and Minev appeared (virtually) before the Interim Finance Committee in order to request funding for up to 28 temporary nurses who would assist in COVID-19 related duties, most prominently the screening of anyone entering their facilities.

These nurses and their screening procedures — which include taking temperatures, asking people if they have flu-like symptoms and taking a brief history — are “our only line of defense from one of our employees bringing in the virus,” said Minev.

According to the Department of Corrections, 11 employees have tested positive for COVID-19. One of them has recovered and returned to work.

State Sen. Yvanna Cancela asked for details on what led to the 39 tests on inmates. Minev responded by saying that providers at all facilities have been instructed to call him “any time of day, 24/7” to discuss any inmates who have symptoms that might be COVID related.

“I’ll discuss with them and decide if symptoms warrant testing,” he added.

Cancela aksed what severity threshold was being used.

Minev replied that it was a “low threshold” and said he’s been in contact with Nevada Chief Medical Officer Dr. Ihsan Azzam.

In other states, prisons have reported that upwards of 70 percent of inmates have tested positive for COVID. Referencing these instances, Cancela asked whether NDOC had a plan for increasing testing.

“We know there are asymptomatic carriers who have the potential to create outbreaks,” she added.

NDOC has “explored the possibility,” according to Minev. “Part of the challenge is the shortage of testing throughout the state.”

He added that the places with high percentages of asymptomatic inmates also have inmates with symptoms.

Assembly Speaker Jason Frierson referenced the Sentencing Commission, which met Wednesday and thrice voted against recommending that the governor and pardons board consider reducing the prison population in the name of public health. Instead, they made a recommendation to the governor that would affect only six inmates.

Frierson told NDOC he wanted to see data on how many prisoners are non-violent and non-sexual offenders, over the age of 65, and have served at least 75 percent of their sentence. Those criteria mirror what Las Vegas Metropolitan Police Department has used to reduce its inmate population by 10 percent.

Daniels told Frierson he would provide those figures “in a few days.”

Frierson opined that watching the Sentencing Commission was “painful” and he criticized unnamed members for being inconsistent: “We can’t say we won’t weigh in on certain policies but then weigh in when it’s convenient.”

He added that the numbers he requested could provide insight “into what we might need to do.”

The Department of Employment, Training and Rehabilitation Interim Director Heather Korbulic and senior staff gave legislators on the Interim Finance Committee an update on the state’s beleaguered unemployment system.

Korbulic, who was appointed to her position by the governor on Tuesday following the sudden and unexplained departure of Tiffany Tyler-Garner, told the Interim Finance Committee that DETR pre-pandemic received 10,000 claims per month and is now receiving that many claims per day.

“Each claim is a Nevadan in need and a Nevadan with a compelling story,” added Korbulic. “That doesn’t escape us. The team understands that.”

DETR staff told lawmakers their department has logged 9,000 hours of overtime since the coronavirus pandemic began in March. The department has also had to subcontract for assistance with mail after receiving “several months worth of mail in several weeks.”

Nevada received a $5.3 million grant from the federal government to assist in unemployment system administrative assistance. Most of that money, the DETR representatives told the legislators, will go toward staff salaries and overtime. The unemployment office is expanding its internal staff by “borrowing” employees from grant-based programs that are temporarily shuttered, and it will have to pay them through its own budget rather than their grants.

Speaker Jason Frierson told DETR he was “a little concerned about the lack of certainty” regarding how the $5.3 million grant would be spent. He wanted to know what the money would be used for beyond labor costs.

Korbulic also told lawmakers that DETR expects to begin accepting unemployment claims from independent contractors and gig workers in “mid-May.” These 1099 workers are not normally eligible for unemployment through the state but are being provided financial relief through the Pandemic Unemployment Assistance provision of the CARES Act passed by Congress in April. These claims will be processed through an entirely new system rather than the existing system used by W-2 employees.

DETR staff defended the work of its new contracted call center, which has been criticized publicly for being unable to answer questions about specific claims. Staff said the call center has been answering “thousands” of “general question” calls per day, which allows DETR staff to handle questions requiring “uninsurant claimant knowledge.”

Staff said one common question was: Why haven’t I received my $1,200 stimulus check? (The answer is that DETR has no involvement in those checks, which are being distributed by the IRS.)

The new call center will handle Pandemic Unemployment Assistance claims once that system is operational.

DETR is also contracting with a company to move its phone system to a new cloud-based system after reports of the internal phone system being overwhelmed. Representatives said the contract for that project is “about 30 days out” but did not provide a firm date.

Typically, an employer’s unemployment insurance tax rate would rise if claims from its former employees rose.

State Sen. Ben Kieckhefer said addressing the issue is important not only because it will make the state qualify for additional grant money but because the state needs “to consider whether it’s appropriate for employers to have a spike in their tax rate because we forced them to lay people off.”

Schmidt added Nevada has been “fairly aggressive” in building solvency since the last recession.

The Interim Finance Committee on Thursday also moved along $4.5 million in federal grant funds to the Secretary of State for election costs related to COVID-19.

Nevada’s upcoming June 9 primary will be held by mail, though limited physical options will be available during the two-week early-voting period and on election day. The Nevada State Democratic Party and national partners have filed a lawsuit against Secretary of State Barbara Cegavske over details within the state’s plans. (A second suit, filed by a conservative outfit in hopes of blocking the all-mail primary, was rejected by the court.)

Wayne Thorley at the Secretary of State’s office told legislators that more than half ($2.4 million) of the grant money will be spent on ballot printing. Other uses of the money include: $750,000 on a public campaign to inform voters about the switch to an all-mail primary, $565,000 for additional voting equipment needed to process the absentee ballots, $234,000 for prepaid ballot envelopes, and $34,000 for a program that will allow for electronic signature cure. Signature curing is the act of correcting any ballot rejected for lacking a signature or for having a signature that doesn’t match what’s on file with the state. 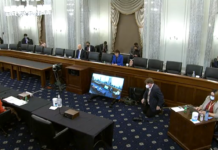 Legislators question if state is doing enough to protect inmates