The company hired to paint portions of Allegiant Stadium is alleged to be “a repeat violator of the FLSA (Federal Labor Standards Act)” according to a U.S. District judge citing a Department of Labor complaint against Unforgettable Coatings, its owner Cory Summerhays and his partners for failing to pay overtime.

The DOL, which filed a complaint against Summerhays and the others on March 12, filed a similar complaint in 2013, that resulted in an order that Summerhays make good on overtime owed to employees.

“Instead of coming into compliance, it appears that Defendants then devised a new set of procedures to obscure its continued failure to pay overtime and then commenced a campaign to deter their workers from speaking truthfully to government investigators,” U.S. District Judge Kent Dawson wrote last month when he enjoined the company from cutting pay and from firing workers in alleged retaliation for cooperating with investigators.

“Defendants have tried not only to silence their workers, but also to actively manipulate them to provide false information to the government’s investigators,” Dawson’s order says. “When workers are first hired, Defendants advise them that they will not be paid overtime premiums, but they will make a flat $12 to $25 per hour — not minimum wage.”

“Wage theft is a rampant problem in the non-union construction industry and it drives down standards for all workers,” says the Laborers International Union of North America.

Between 2010 and today, the DOL has recovered more than $19 million in back wages from 1,615 employers in Nevada.

Taxpayers are often on the hook for providing services when workers don’t receive wages to which they are entitled.

The cost to taxpayers of providing Medicaid to Unforgettable Coatings’ eligible employees and family members in Nevada was $93,703 in fiscal year 2018, according to an annual report required by the Legislature.

Former employee Cristian Cespedes wrote in a court declaration that he was employed by the company for six years, beginning in 2013.

In an interview, Cespedes says he was promised a salary as a supervisor but it was never fulfilled.

In court documents, the company says it employs more than 400 people in four states — Nevada, Arizona, Idaho and Utah.

Payroll records reviewed by the Current indicate entry-level painters are being underpaid by approximately $1,900 a year.

“The more you make, the more he takes,” says Savannah Palmira, an organizer with the Professional Finishers District Council 16.

The current complaint alleges Summerhays failed to pay overtime from September of 2019, when the DOL began its investigation, until March when the government filed the complaint.

Check stubs obtained by the Current indicate workers are paid $8.25 an hour plus bonuses and profit-sharing premiums of several hundred dollars, but no overtime. Gross pay divided by hours worked consistently equates to about $15.25, approximately $5 to $10 dollars below standard pay for a non-union painter and $35 less than the $50 per hour paid on prevailing wage jobs such as the stadium.

“He has a different crew for prevailing wage jobs,” Cespedes told the Current. “Honestly most of the people who work there don’t have papers. He has this other crew. They have papers, that’s why he sends them to the other side.”

Under Nevada law, “any bonus or arrangement to share profits” is not considered wages.

“The current DOL investigation began in September 2019 when investigators visited several of Defendants’ worksites and interviewed employees confidentially,” says the injunction signed by Dawson. “Within an hour, Defendant Summerhays went to those worksites and warned his employees they should be wary of immigration consequences if they talked about their work to strangers. Defendants have since repeated those with the obvious intent to intimidate their workers into silence.”

On March 18, less than a week after the DOL filed the current complaint, employees were told their pay would be cut by 30 percent.

“Some workers complained to their foremen, who informed them of the pay cut, and then directly to Defendant Summerhays. They later received text messages telling them that there was no more work for them,” Dawson’s order says.

The government’s actions “are premised on false allegations and a manufactured theory of retaliatory conduct advanced in blind ignorance of the current economic crisis,” Summerhays says in his response to the DOL’s application for an injunction.

Summerhays maintains the COVID-19 crisis brought a halt to his work, which he says was already waning earlier in the year.

“In December 2019 and January of 2020, UCI began to have difficulty filling its schedule 4 to 6 weeks out,” Summerhays argued in court filings, noting his general manager “sent text messages in December 2019, January 2020, and February 2020 wherein he expressed his concerns, such as ‘I have zero work for guys. Every job is doubled up’ and ‘we are running out of work again. … Mr. Summerhays also noticed the scarcity of work.”

But in February, Summerhays was featured in a news story about companies struggling to find workers.

”We are scrambling to solve what we would call a Cadillac problem, lot of work, simply trying to find people to fill those spots,” he told 8 News Now.

Summerhays, a Utah native who lives in Southern Nevada, also owns Blue APE. He and his companies have enjoyed a wave of publicity from Las Vegas new outlets.

A year ago he was featured by Vegas INC as one of the “40 Under 40” achievers in the valley.

Months later he was again profiled by the publication, which wrote about his upbringing.

“I grew up the son of a single teenage mother. All I need to say is I’ve been a hustler and an individual with a certain perspective that has served me well,” he said.

In January, he was featured by 8 News Now for giving an employee $15,000 for in vitro fertilization treatments that resulted in a baby.

“You can’t take that blessing away from that family. That’s a great thing that he did,” says Palmira. “I just wish he would pay his employees.”

Last week, Summerhays was featured by News 3 and 8 News Now for handing out gasoline gift cards to Las Vegans waiting in line at a food bank. Unforgettable Coatings also picked up the tab for grocery shoppers.

Summerhays agreed to an interview with the Current but later canceled and rescheduled. His attorney subsequently canceled that interview and offered to answer questions submitted in writing.

“The legal issues are complex,” Summerhays’ attorney Paul Trimmer told the Current. “I’m concerned about letting someone answer questions like yours.”

Wage theft takes a toll not only on workers and their families, but also on competitors, who complain perpetrators are able to unfairly low-ball contract bids.

Under the FLSA, the DOL can obtain injunctive relief, recover back wages, and liquidated damages.  It can also assess civil penalties.

Lawsuits, settlements, and fines become part of the cost of doing business for employers who skim from workers, says Las Vegas attorney Bradley Schrager, who says laws are on the books that provide for criminal charges against perpetrators, but they are rarely used.

“The statute of limitations is only two years, so if you can get away with it for that long, it’s profitable,” he says.

Some states are giving offenders a reason to comply with the law by criminally prosecuting cases of wage theft, according to a report last year from Bloomberg.

“Only the wage and hour statutes have a provision for referring cases for criminal prosecution,” says Nevada Labor Commission spokeswoman Teri Williams, who says “a handful of cases have been referred” to the Clark County District Attorney “for their review.”

“We’re not aware of any criminal prosecutions of NRS 608 in recent history,” Williams said.

District Attorney Steve Wolfson did not respond to a question about wage theft prosecutions in his office.

Nevada Attorney General Aaron Ford, who supported the infusion of $750 million in public money for Allegiant Stadium as a state senator, has not yet said whether he’s prosecuted any criminal charges of wage theft.

Unforgettable Coatings told Nevada Business it was chosen to paint portions of the publicly-funded Allegiant Stadium. But in some cases, contractors with a history of wage theft may be barred from public works projects.

Violators who receive an administrative penalty in Nevada may not be awarded a public work project for three years after the fine is imposed. Those assessed a penalty for a second offense are barred for five years. Contractors who are debarred by the federal government are ineligible in the state for the duration of the federal penalty.

Correction: The amount collected by the DOL from Nevada employers was incorrect in the original version of this story. 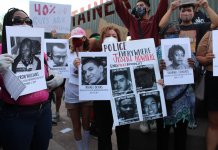 #MeToo on ice in Nevada casinos