WASHINGTON — Nevada lawmakers are urging Congress to help rural America in the next round of coronavirus legislation.

Congress approved more than $2 trillion in response to the pandemic in March, but Democratic Sen. Catherine Cortez Masto thinks it “did not go far enough” in addressing the needs of rural Americans, according to her spokeswoman Lauren Wodarski. “She is fighting for that funding in the next relief package.”

Sen. Jacky Rosen — also a Democrat — is also working to ensure the state’s smaller counties and communities “are not left behind in our national COVID-19 response,” according to her spokeswoman Ivana Brancaccio.

Media coverage of the pandemic has focused on urban hotspots like New York City, New Orleans and Seattle. But the virus is increasingly affecting rural America — and some fear the resources aren’t in place to address it.

Eighty-six percent of rural counties have had at least one case of COVID-19, according to Carrie Henning-Smith, a public health professor at the University of Minnesota. And cases and deaths are growing at faster rates in rural areas than in metropolitan ones, according to a report released last week by the Kaiser Family Foundation.

Rural Americans — who comprise 15 to 20% of the U.S. population — are at higher risk than their urban and suburban counterparts. They tend to be older, have higher rates of underlying health conditions and are more likely to have low incomes, live in poverty and be unemployed and uninsured, Henning-Smith said.

“When you look at the demographics of who’s living in rural America, they’re very susceptible to COVID-19,” said Maggie Elehwany, vice president of government affairs and policy at the National Rural Health Association.

The statistics are worse for minority groups in rural America, she said.

Rural Americans also have less access to health care providers, and many rural health facilities are struggling financially, she added.

The situation has been made worse by the COVID-19 pandemic, according to Dan Derksen, director of the University of Arizona Center for Rural Health. Individuals have been reluctant to access care because they fear exposure to the virus, and uncompensated or “charity” care has increased as people have lost their jobs — and the health insurance that goes along with it, he said. At the same time, hospitals and clinics have faced bans on elective surgeries, a main source of income.

The economic consequences of the pandemic are also of special concern in rural America, which hasn’t recovered from past recessions as quickly as other parts of the country, according to the Center for American Progress.

Congress has taken some steps that have aided rural America in relief packages so far, such as waiving restrictions on telehealth during the pandemic, supporting tribal communities and providing some support for increased access to high-speed internet.

Last week, the U.S. Department of Health and Human Services announced it would begin distributing $10 billion approved for rural hospitals. Of that, 21 hospitals, clinics and health centers in Nevada will receive nearly $51 million.

A priority item: federal aid for small towns and cities, which are facing major revenue losses in the wake of the pandemic. As a result, funding for police, fire departments, emergency responders, schools, trash collectors, and libraries and other civic spaces is under threat.

The issue has become a flashpoint on Capitol Hill. Lawmakers from both parties have expressed support for aid to states and local governments, but some prominent Republicans — including Senate Majority Leader Mitch McConnell (R-Ky.) — have bristled at the idea.

In March, Congress set aside $150 billion in its $2.2 trillion coronavirus package to help cities and states respond to the pandemic. But the legislation only provides direct aid to municipalities with more than 500,000 people.

In April, a pair of bipartisan senators unveiled a proposal to provide states and municipalities with $500 billion in stabilization funds, but counties and towns with less than 50,000 people wouldn’t be eligible for aid.

Cortez Masto and Rosen are backing legislation that would provide municipalities with fewer than 500,000 people with $250 billion in flexible funding. It would help mid-sized cities like Sparks and Carson City and rural communities like Elko and Lyon counties, Brancaccio said.

“The best way to get that relief to communities is by providing flexible funding to local government,” Wodarski said. The bill, she added, doesn’t set a population minimum.

Democratic Reps. Susie Lee, Steven Horsford and Dina Titus have signed on to a House version of the bill.

Nevada is one of the hardest hit states economically, said Horsford, who represents a sprawling district in the southern half of the state. “Any future coronavirus response package must provide strong support for … essential workers to our state and local governments as well as tribal governments so they can get paid and have the resources they need to help us weather this storm together,” Horsford said Wednesday.

Lee said funding must also give government officials the flexibility to use funds to fill revenue shortfalls. “In Nevada, that’s going to be incredibly important,” she said on a call with reporters.

The state’s fourth member of Congress, GOP Rep. Mark Amodei, has not signed on to the bill and did not respond to a request for comment.

Cortez Masto has urged the Trump administration to provide assistance to dairy and cattle farmers, and she and Rosen back more support for telehealth, rural health care providers and facilities, and long-term stable funding for rural areas. Rosen is also backing a measure to increase access to broadband internet service to bridge the “digital divide,” Brancaccio said. 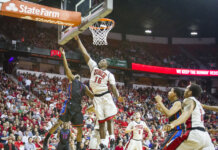