Gig workers, independent contractors, the self-employed and other workers who file federal taxes with IRS 1099 forms instead of W-2s will be able to begin applying for unemployment benefits Saturday, the state Department of Employment, Training and Rehabilitation announced Thursday.

“We know there is a high demand and expect our call center and claims portal to be very busy the first few days,” said DETR Director Heather Korbulic.

The department said it expects to make the first payments starting May 23.

PUA benefits will be retroactive to Feb. 2.

There is no good hard count of how many gig and “1099” workers are in Nevada or any other state.

“DETR anticipates tens of thousands or even hundreds of thousands of applications being submitted; likely all at once,” the department cautions on a PUA web page that was also unveiled Thursday.

That web page also lists eligibility criteria, documents applicants will need to file, and other information, along with the link to where people can, starting Saturday, file a claim. For weeks DETR has been telling gig workers not to file an application, because the regular unemployment system couldn’t process them and would just kick out their application.

Already besieged by hundreds of thousands of people filing for unemployment under the state’s regular system, DETR has had to also and at the same time effectively create a new system to process claims filed by those who will be eligible under PUA.

DETR hired Geographic Solutions to implement the new system. The firm has already implemented PUA systems in several other states, including Pennsylvania and West Virginia, according to DETR.

Nevada has lagged the rest of the country in implementing PUA, and while several states are still in early stages and have yet to start paying benefits, Nevada and as of early this week was the only state in the nation that hadn’t begun to at least accept PUA claims, according to researchers tracking PUA progress nationally.

One of the complications that has made it difficult for states to begin accepting and processing PUA claims is that states need to base those state benefits on 1099s instead of income reported in a W-2.

When filing, “Documents which show your total income for the entire year such as tax documents are preferable, as these will allow a quicker review of your total earnings,” the DETR web page says.

“The Division and our dedicated staff have been working day and night to stand up this system and we look forward to the relief it will bring to tens of thousands of Nevadans,” Korbulic said. 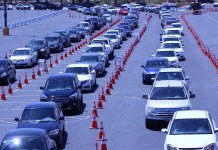 Options abound, but will schools have money to implement them?