“Big Dan Rodimer supports our President and his policies that are benefiting all Nevadans of all backgrounds,” Laxalt is quoted saying on Rodimer’s site.  “And, as Nevada’s former Attorney General, I know that Big Dan will support and defend our Constitution, our freedoms, and our individual liberties.”

On his website, Rodimer accuses Dan Schwartz, his Republican primary opponent in Congressional District 3, of agreeing with Alexandria Ocasio Cortez on immigration and Michael Bloomberg “on gun-grabbing.”

“You left out Pelosi and I are two peas in a pod,” says Schwartz, who has clearly seen the website.

“The guy is a liar, for starters.  Everything he says about me simply isn’t true,” Schwartz, who formerly served as state treasurer, said during an interview with the Current.

Rodimer, a former pro wrestler who ran unsuccessfully for state senate, did not respond to requests for an interview.

“The guy’s got a police record and a court record longer than a mile,” says Schwartz.

His website cites arrests, lawsuits, judgments and liens against Rodimer.

“My basic question is why is he running? Anyone else would shy away from that and I can only guess he is sufficiently impressed with himself that he thinks no one is going to discover this or he thinks it doesn’t matter.”

Still, Schwartz, who hopes to take on Democrat Susie Lee in November, is taking Rodimer seriously.

What does Rodimer’s ability to raise money say about Republican voters?

“Well, I’m going to let you answer that,” Schwartz says. “I think his appeal is based in part on his misrepresentation. He just makes stuff up.”

Fabrication is in fashion in the Republican hierarchy these days, making it difficult for some conservative but thoughtful members of the party to find a refuge.

Rodimer says on his website that Schwartz is a “never-Trump Republican.”

Schwartz says he supports the president but says he’s not going to excuse the administration’s response to COVID-19, pointing to more than 90,000 deaths and 34 million unemployed.

“Statistics show we could have done better,” he says.

“Obviously, as a Republican in a very Trump invested district, I have to support the president. Unless I have a death wish,” he says of the district Trump narrowly won in 2016.  “In his defense, I don’t think anybody really appreciated the severity and the seriousness of the virus.  I certainly didn’t.”

Schwartz, whose wife is from China and followed the emerging crisis closely, says blaming China is futile.

“The Chinese were traveling all over the world for New Year. That’s partly why we’re in the position we are,” he says.

Rodimer, on the other hand, wants to “hold China and the WHO accountable” for the virus’ spread.

Rodimer says on his website that Gov. Steve Sisolak lacks a plan for reopening the state.  Rodimer advocates for local governments taking control, a strategy Sisolak has implemented.

Schwartz sympathizes with what he calls the “Open It Up Republicans” who stormed the Governor’s Mansion in Carson City demanding Sisolak re-open businesses, but calls their approach “a little simplistic.”

“I agree with what they were trying to do,” he says.”They were trying to get the governor to loosen the restraints because otherwise we’re going to be wiped out as a society.  It’s that simple. You can’t close an economy down.”

Schwartz says he would have voted for the Paycheck Protection Program if he were in Congress.

“I think 34 million unemployed is off the charts and people have just been cut off,” he says. “At the same time, should we have given this money to larger corporations? Should we be spending it in a way that gives us long term benefits? I would have argued for some serious amendments to the package to say this is not a grab bag for everybody.”

Schwartz says he would not have voted for the $3 trillion bill passed by the House last week.

“Nancy Pelosi’s bill is a grab bag for everybody. But in her own way she’s trying,” he says.

“We could have taken some of these trillions of dollars and built infrastructure rather than just giving the money out, and I know that it was needed and necessary but we have nothing to show for it,” he says.  “South Korea, Singapore, Hong Kong, they’ve put in infrastructure to protect the people.”

“What I think we should have done is come up with some national standards that would contain the virus and I think in a country like the U.S., that’s very difficult,” he says. “What I think ended up happening is the administration and Congress threw up their hands and threw money at it.”

Schwartz says he favors Congressional action to compensate front-line workers, such as grocery clerks, who are losing the small bump in pay they’ve received during the shutdowns.

“Our society rewards taking risks. It doesn’t reward someone who punches in 9 to 5,” he says.

“Some employees don’t want to take risks. I’ve offered them stock options. They want the cash.”

“The disparity in society is great.  The amount of compensation for top executives is extreme.  But if we want a free-market, free-enterprise society, this is what we have,” he says.

The pandemic has not changed Schwartz’ thinking on health care.

“I don’t think we should have single-payer, government health care.  People want moderate premiums and cost controls until they are sick,” he says. “What we need is integrated private health insurers.”

“There are some very good government workers. But by and large, they’re very bureaucratic,” he says of the prospect of government-run health care.

On the hot-button issue of immigration, Rodimer supports Trump’s call for building a wall between the U.S. and Mexico.

Schwartz says he follows “the party line” on immigration.

“I think there’s no question immigrants play a critical part in our economy.  Can we continue to allow people who are mistreated in their own countries, should that be the responsibility of the American taxpayer? I don’t think it should be,” he says. “This is not Emma Lazurus in 1910 or whenever she was here. It’s a different world in a different country.” 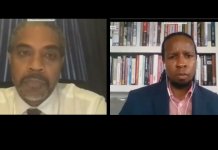