The COVID-19 rapid tests dispatched throughout Nevada by Gov. Steve Sisolak to detect the disease in vulnerable populations may miss as many as one-third to one-half of infections, according to a study by New York University, prompting a warning from federal regulators and decisions by some health care providers to limit their use or not use them at all.

The NYU study has not been peer-reviewed, but echoes concerns about the tests voiced for weeks by health care professionals.

In April, the federal government provided Nevada with twelve Abbott ID NOW test modules. Last week, the Food and Drug Administration issued a warning the tests could be inaccurate, about six weeks after approving the test in late March.

“This test can still be used and can correctly identify many positive cases in minutes. Negative results may need to be confirmed with a high-sensitivity authorized molecular test,” Tim Stenzel of the Center for Devices and Radiological Health said in a news release.

Abbott contends the NYU study results are inconsistent with other studies.

“For example, in another recent study in Washington state, out of approximately 1,000 subjects there were 23 positive for COVID-19 on a lab test and ID NOW picked up 21, demonstrating 91% sensitivity and 100% specificity,” the company said on its website Thursday.

Abbott says data from its study and others indicate the ID NOW test works best in patients who are tested soon after the onset of COVID-19 symptoms. The test is used daily to test the president and others in the White House.

In April, Sisolak noted that economically disadvantaged Nevadans “are not being tested for COVID-19 at the same rate as other populations. For me, this is a big problem.”

“So when the federal government sent rapid tests, called Abbott testing machines, to Governors across the nation, I immediately made the decision to send these to local health authorities in Clark County, Washoe County, Carson City, Winnemucca and Elko,” Sisolak said.  “These rapid tests can go to populations who previously may not have had access.”

Eight of the modules were deployed in Southern Nevada, according to the Health District, which did not respond to requests to identify the locations.

“The Southern Nevada Health District is using the Abbott ID Now Test in its clinic,” said spokeswoman Stephanie Bethel, but she said the Southern Nevada Public Health Laboratory is double-checking those tests by “currently comparing test results to PCR testing.”

SNHD did not provide the Current with results for those confirmation tests.

PCR or Polymerase Chain Reaction testing must be performed in a laboratory by highly-certified personnel and takes 24 hours to process. By contrast, the Abbott ID NOW tests are performed using a toaster-sized, point-of-care module that gives results in 13 minutes.

University Medical Center, which is testing thousands of resort industry employees for COVID-19, received an Abbott module but has never used it.

“I spoke with our lab director, and she confirmed that we received this piece of equipment but it has not been used for any patient testing as a result of concerns about the system,” says Scott Kerbs, spokesman for UMC.

“The State allocated four (test modules) to Washoe County, which were distributed to the Renown, Saint Mary’s and Northern Nevada Medical Center, and Community Health Alliance,” says Washoe County Health District spokesman Scott Oxacart. “The State also provided one to the Reno-Sparks Indian Colony clinic. We don’t know if any independent testing has been done at these facilities.”

“We are aware of the unit’s limitations and are using it as a preliminary screening test, not a diagnostic tool,” says a spokesperson for Renown Health.

“We went through the proper channels of validation and met all the requirements,” said Cheryl Snook, Lab Director for Northern Nevada Medical Center. ”We don’t use it as a primary mode of testing. Just in emergency situations, like if someone is going into surgery.”

“We confirm all negative results with another methodology,” said Snook, who said many of the testing perils surfacing during the crisis are the result of expedited approvals.

“The tests came out so fast they didn’t have a good feel for sensitivity and specificity,” she said.  “It’s just the nature of how quickly this all evolved. Since this was an emergency, we expect a lot of updates with COVID testing.  It will be nice when everything is cleared (by the FDA) and we get results across the board.”

“No diagnostic test will be 100% accurate due to performance characteristics, specimen handling, or user error,” the FDA said in a release, “which is why it is important to study patterns and identify the cause of suspected false results so any significant issues can be addressed quickly.”

The governor’s office did not respond to requests for comment about the reliability of the Abbott tests. 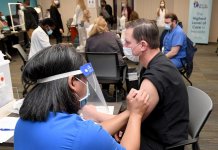 COVID-19 tests targeting vulnerable populations in Nevada may be flawed