Family members of people killed by the police speak out at Saturday’s protest. (Photo by Michael Lyle)

His name was Byron Williams and he died while in custody of the Las Vegas Metropolitan Police Department Sept. 5, 2019, a full nine months before protesters nationwide took to the streets demanding justice after a video showed Minnesota man George Floyd, who was handcuffed, pled for his life and uttered “I can’t breathe” while an officer held a knee on neck for several minutes.

“Watching the news has brought back memories of how my uncle died at the hands of the police,” said Marcia Wells, the niece of Byron Williams. “Watching (Floyd’s death) was like watching what happened to my uncle all over again.”

Wells, along with other family members of people killed at the hands of Las Vegas Metropolitan Police Department, were among those attending a Black Lives Matter protest on Saturday.

“My heart goes out to the family of Mr. Floyd because I know exactly how they feel,” said Alma Chavez, the mother of Rafael Olivas who was fatally shot by police in 2011 after she called 911 in order to get mental health services. “I know how they feel the first day. I know how they feel three days after. I know how they will feel nine years from now, because I’ve been living that pain for nine-long years after I lost my baby when I trusted the police. He needed help but he was killed without mercy. I want everyone to wake up and peacefully protest against police brutality.”

An estimated 2,000 people crowded on the sidewalk outside the Container Park Saturday night, spilling over into the streets.

“We’ve been waiting for something like this for so long,” Wells said. While some news outlets covered the death of Williams — Metro said he fled after police officers approached him for riding his bicycle without safety lights — the case didn’t draw mass protests like that of Floyd.

On Saturday, people marched up and down the streets of Downtown Las Vegas chanting Floyd’s name or other rallying calls like “Black Lives Matter” and “I Can’t Breathe.”

After a group of protesters met a wall of officers blocking them from marching, the crowd took a knee and had a moment of silence in honor of Floyd. They then took to their feet and began chanting once more. 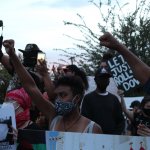 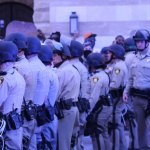 Police officers hold protesters back as they try to march forward in Las Vegas at a Black Lives Matter protest in May 2020. (Nevada Current file photo) 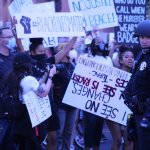 Protestors hold signs – and some wear backpacks – outside the Container Park in Downtown Las Vegas condemning police brutality May 31. (Photo by Jeniffer Solis)

After several hours of peacefully protesting, a handful of the thousands of protesters threw bottles at the police and antagonized officers despite other organizers asking them to refrain. However, their actions were enough to prompt law enforcement to release tear gas on the crowd, hitting protesters along with many reporters and legal observers. Dozens were arrested.

Many worry much of the media consuming public will focus on the aftermath rather than the overall message. The night was about giving those whose lives have been slammed by police violence a place to speak, as well as giving many in the community an opportunity to raise their voices against ongoing systemic oppression and police brutality.

They feel for far too long, their voices have gone unheard.

For several days since Floyd’s death and the ensuing upheaval in Minnesota, a quote from Dr. Martin Luther King Jr. has been circulated, including by The King Center and Bernice King, the daughter of the civil rights leader:

“I think America must see that riots do not develop out of thin air and certain conditions continue to exist in our society, which must be condemned as vigorously as we condemn riots,” King said nearly 50 years ago. “A riot is the language of the unheard. What is it that America has failed to hear?”

Wells along with other locals who’ve lost family members at the hands of the police over the last several years, are still hoping people recognize the ongoing struggles the community faces.

Southern Nevadans have joined people in cities nationwide to take to the streets and express outrage not only over Floyd’s death and the city’s failure to arrest the officer immediately, but also at the fact his death was just another reminder of Black deaths in this country.

On Friday, another 400 marched on the Strip. More than 80 people, including two journalists wearing press badges and who identified themselves as press, were arrested. 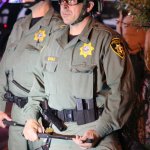 Police officers take out batons after telling protesters to disperse during protests in Las Vegas, May 31, 2020. (Photo by Jeniffer Solis) 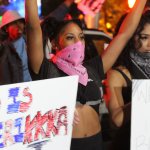 Protesters march on Fremont Street to speak out against ongoing police violence. (Photo by Jeniffer Solis) 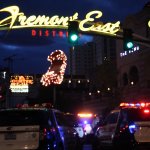 None of the protesters charged with failure to disperse were granted release on their own recognizance and the Mass Liberation Project, part of the Progressive Leadership Alliance of Nevada, spent the day posting $1,000 bail for many of the people.

Gov. Steven Sisolak along with Attorney General Aaron Ford and Assembly Speakers Jason Frierson released a joint statement about the protests and calling the police officer’s action against Floyd “despicable.”

“To the protesters, we hear you and we are listening, and more importantly, we invite you to be part of a constructive solution, and the healing our community desperately needs. We respect and defend your right to protest, but please express yourselves peacefully,” they wrote.

A few weeks before Floyd was killed, Breonna Taylor was asleep in her bed in Louisville when officers, who were executing a warrant at the wrong location for a suspect who was already in custody, shot her eight times.

And before those deaths, Ahmaud Arbery was gunned down while jogging in Georgia. His death was captured on video in February but the men who shot him weren’t arrested until May and only after the footage surfaced.

Between Arbery and Floyd’s death, COVID-19 swept through Black communities killing them at a higher rate than white people. Many point to systematic failures in health care or to adequately provide resources to Black communities as the cause.

The New York Times reported in Minnesota alone, which is about 6 percent African American, Black people accounted for 29 percent of the COVID-19 cases.

Black people are tired of dying. So they are taking to the streets as an outpouring of frustrations.

Activists have argued the underlying issue of anger has gotten lost and transformed into an argument about “the right way to protest” as some have looted and burned down businesses.

Among those were President Donald Trump, who referred to protesters as thugs and tweeted “when the looting starts, the shooting starts.” Twitter blocked the tweet saying it violated rules on glorifying violence.

Many have noted that the president also demanded the NFL kick out players who peacefully take a knee during the National Anthem as a way to protest against police brutality and the killing of Black Americans.

But the protests across the country, advocates argue, are just a continuation of ongoing struggles for justice and police reform.

Organizers are pushing for change on many fronts, including ousting elected officials who refuse to act.

Oja Vincent, who spoke to the crowd Saturday night, reminded people to vote on June 9, in particular to pay attention to the numerous judicial races.

“We missed our opportunity to get a good district attorney and got stuck with Steve Wolfson,” he said. “Now we could go for judges. There are a lot of good judge candidates. I’m not saying (voting) is the only way but it’s part of the way.”