Las Vegas Metro Sheriff Joe Lombardo says the man seen in a May 30 video that is “like wildfire on the Internet” was arrested because he was spotted earlier that night throwing objects at police.

But a protester also seen in that video says the man in question was a documentarian, not a protester.

“He was here recording a documentary, a video on COVID.  He was there to record what was going on,” says Nicholas Vosdoganis, who was arrested with his wife and friends and held with the documentarian’s partner, he says.

The Current was not able to independently verify the young man was filming a documentary.

Metro did not respond to requests to release the name of the man being dragged in the video, who Lombardo says was throwing objects at police.

“I didn’t resist anything and I’m being arrested for no reason!” Vosdoganis is seen and heard yelling in the video, which looks more like a scene from a dystopian film than a Saturday night in downtown Las Vegas.

An officer can be heard saying “you’re next” to the person taking the video as the protesters are carted away by police.

“Before the protest, I felt like Metro was one of the better departments in the country,” he says. “The veil has been pulled back. I truly no longer believe anything they say.”

Vosdoganis, his wife, and friends were taking video of police during the protest.  That video shows officers suddenly swarm Vosdoganis as he yells “no justice.”

“They tackled me and said I was resisting,” he says. “They arrested all four of us for standing there. They didn’t give an order to disperse.”

Lombardo says 15 investigations of potential wrongdoing have been opened by Metro and he encouraged citizens who think they’ve been wrongfully treated by police to file a complaint.

Vosdoganis is not among them.

“I haven’t frankly, because I’m afraid of retribution,” he says, adding he’s sent emails to Las Vegas Mayor Carolyn Goodman and Councilwoman Olivia Diaz. “This is a police department that had to have the Department of Justice come in because they were killing so many people and instead of fixing it, seems like all they did was get good at PR.”

Records confirm Vosdoganis’ wife and their friends were booked for Provoking a Breach of the Peace and required to pay bail of $640 each.

“The jail conditions were disgusting, and in spite of a global pandemic, the holding cells clearly had not been cleaned in months if not years,” Vosdoganis said of the city jail. “Visible mold on the walls, nonfunctional water fountains. Some jailed peaceful protesters were even told, ‘we don’t have time for that coronavirus shit’ and then jammed into holding cells 15-plus at a time with no masks, in cells with 12 seats.”

City officials did not respond to requests for comment.

“They detained me overnight and never booked me,” Vosdoganis says. “I have no case number because they bungled my paperwork so badly they were forced to let me leave. Just walked right out. They tried to have two Metro officers show up at the jail and interrogate me to find a reason to keep me in, but ultimately could not do that.”

“LVMPD did everything in their power to send a message that they had no interest in letting us practice our right to free speech,” he says.

Metro declined to comment on the allegations and once again suggested citizens file complaints.

Gov. Sisolak has also declined to address allegations that Metro engaged in arbitrary arrest and unsafe detainment of peaceful protesters as the state endeavors to snuff out the coronavirus.

“I’ve had numerous discussions with Sheriff Lombardo and law enforcement and they are continuing discussions,” the governor said earlier this month. “Right now I’m focusing on the discussions with the communities that are most impacted by this and we will get to how everybody was handled during this protest and there will be reflection on that and analysis of the entire situation.”

Lombardo says the department is going through “thousands of hours of body cam video to investigate hopefully within 30 days.”

Metro says it’s arrested 377 “subjects” at protests since May 29, with the majority of arrests that weekend.

Many of those arrested Friday, May 29, were required to post $1,000 bail, despite standing orders at the Clark County Detention Center and Las Vegas Justice Court that allowed them to be released on their own recognizance.

Those adjudicated through Las Vegas Municipal Court were also required to post bail, seemingly in contradiction to the court’s practice of releasing most misdemeanants.

“The court does not have a single policy on releasing individuals based on their specific basis for incarceration.  The court utilizes the Nevada Pretrial Risk Assessment Tool and grant OR release to ALL low-risk individuals,” the court said in a statement to the Current.  “In general, this would tend to apply to individuals whose only offense is for a non-violent protest incident.”

The city did not respond to information requests for the number of protesters who posted bail. 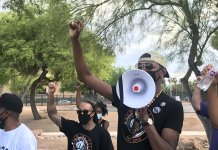 Horsford, Lee say Trump has ‘forced’ them to join calls for...