As summertime temperatures climb in Nevada and across the country, baby boomers— the generation born between 1946 and 1964— will be among the hardest hit by climate change, and Covid exacerbates the peril, according to a new Climate Central report.

Average summer temperatures in Nevada’s cities have substantially climbed over the past 50 years — in Reno’s case by double digits — leaving today’s seniors at higher risks of dying from heat-related causes in the near-term.

In fact, heat-related deaths have more than quadrupled in Nevada over one recent four-year period, soaring from 28 deaths in 2014 to 139 in 2017, according to data from the U.S. Centers for Disease Control and Prevention.

Boomers over the age of 60 already account for more than 80 percent of heat-related deaths nationally, according to researchers, making the group particularly vulnerable to current rising temperatures in Nevada’s fastest warming cities, especially Las Vegas.

A 2019 study by faculty and undergraduate students at the Desert Research Institute (DRI), Nevada State College, and Universidad de Las Americas Puebla found that between 2007 and 2016 there were 437 heat-related deaths registered in Clark County and that 76 percent of of those deaths were adults over 50 years old.

What’s more, the number of retirement-age residents is rapidly increasing in Nevada, with nearly 1 in 6 residents now age 65 or older, according to estimates from the U.S. Census Bureau, meaning that year after year a growing number of elderly people are being exposed to rising temperatures.

On average, U.S. cities were 2.4 degrees hotter than the surrounding rural areas during the past 10 summers due to the abundance of blacktop and pavement, according to Climate Central, but decades of greenhouse gas emissions and global warming takes heat and makes it worse. 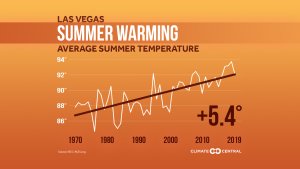 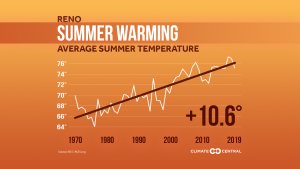 Hotter summers only heighten the risk of heat-related illnesses and injuries for the elderly.

Several factors contribute to older populations’ vulnerability to heat, said Dr. Jay Lemery, a professor of emergency medicine at the University of Colorado School of Medicine, who has written two textbooks on climate and health.

In the report Lemery notes that as we age, our bodies regulate internal temperature less effectively, with declining ability to sweat and circulate blood to the skin, and a weaker cardiovascular system.

Senior citizens can get into serious danger during hot summers, as heat and dehydration stress bodies already challenged by age and chronic medical conditions or made more vulnerable by medications, said Lemery.

Not only are older adults more susceptible to the physical effects of heat, they’re also more likely to live on fixed-income budgets, making it difficult to repair air conditioners and make utility payments.

Nonprofits in Nevada that assist low-income seniors with air conditioning repair like Rebuilding Together receive hundreds of requests during the summer.

But 104 degrees is still hot, and a home without air conditioning or with disrupted power service can be hazardous.

Nighttime lows have warmed up, too, giving residents less chance to recover from the heat. 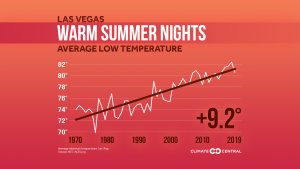 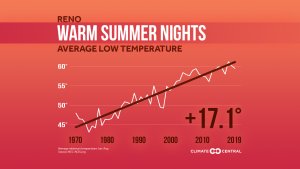 In Nevada, those who are 65 years and older account for eight out of 10 deaths from COVID-19, according to Dr. Fermin Leguen, acting chief health officer of the Southern Nevada Health District.

“The stakes are higher,” said Lemery, professor of emergency medicine at the University of Colorado School of Medicine. “As the summer months roll around, if you are isolated, if you are elderly and it’s hot out, and you are concerned about Covid, we’re kind of entering the perfect storm for bad things to happen.”

In the Climate Central report, Eric Klinenberg, a sociologist at New York University, also warns that social isolation for seniors could increase risk of heat-related deaths.

“This coming summer, with people staying at home and sheltering in place and public places shut down, I have real concerns about social isolation turning deadly on a massive scale,” Klinenberg said. “Everyone should be aware that this summer there may be more vulnerable people home alone and isolated than ever before. And the combination of extreme summer heat and millions of people home alone and isolating is potentially catastrophic.”

Military at risk from COVID-19: ‘Anxieties are really high’