Part of the federal funding sent to Native American tribes for COVID-19 relief could be used to build long-sought health infrastructure, though conditions placed on the federal aid and delays in its arrival threaten tribes’ ability to capitalize on it.

The $2.2 trillion CARES Act Congress passed in March included $8 billion directly for tribes to pay for costs associated with the health response to COVID-19. Funding from that law may be the only avenue for tribes looking to undertake major projects, said Amber Torres, chairman of the Walker River Paiute Tribe, about 90 miles southeast of Reno.

“That’s the only way that we’re going to be able to upgrade some of these older facilities, or even look at building brand new facilities,” she said. “They’re so old and antiquated. This would be our prime opportunity to make sure that we have the infrastructure, that we have everything that we need to battle COVID going forward.”

Though the virus has hit many Native communities worse than the general public, Nevada tribes have largely avoided the worst outbreaks. Only 84 cases, about .6%, of the state’s total are American Indian or Alaska Native, according to Nevada Department of Health and Human Services data. American Indians and Alaska Natives make up almost three times that share of the state’s population, the Census Bureau estimates.

Still, members of Nevada’s congressional delegation are pushing for the next federal aid package to include more funding for the state’s tribes and federal programs to address long-standing needs. Nevada Sen. Catherine Cortez Masto, a Democrat, said at a Senate Indian Affairs Committee hearing last week that as Congress puts together its next package, it should make sure the Indian Health Service (IHS) has the infrastructure needed. IHS is a Department of Health and Human Services agency focused on Native communities.

Torres said the tribe is looking at spending its own allocation — about $20 million in the first of two funding rounds — on a new clinic or to fix water infrastructure. The reservation’s only health clinic was built in 1931.

Many IHS facilities nationwide need upgrades. A 2016 assessment IHS presented to Congress reported that “many facilities were constructed before contemporary health care delivery models” and said it would cost $14.5 billion to expand its facilities to their needed capacity. The report pegged Nevada’s need at $91 million.

Nevada tribes face challenges, though, in using COVID relief money to replace or repair such facilities. The law requires the money to be spent by the end of the year. Smaller tribes that may not have grant writers or program planners on staff worry about having enough time to put it to use, said Clifford Banuelos, environmental tribal-state liaison for the Inter-Tribal Council of Nevada.

Torres said the most helpful thing Congress could provide would be an extension to use the money. The initial steps alone of building a new clinic or addressing water infrastructure could take six months, she said.

The federal money has been slow in arriving. The U.S. Treasury Department split the $8 billion into two different allocations, with the first 60% decided by population and the remaining amount decided by other factors. The department said in a June 17 update it had released all of the money except some slated for Alaska. Torres said Wednesday her tribe still hasn’t received its full allotment.

Nevada tribes also worry about violating the rules attached to the Treasury funds, which are supposed to be used only for costs directly related to COVID-19 responses, and say the department hasn’t provided clear guidance on spending.

“We’re not too happy with the instructions Treasury has given,” Banuelos said.

Tribal leaders say they’re in a difficult position, trying to avoid both improperly spending money tribes would have to repay and wasting the federal aid by missing the year-end deadline.

“All the money that’s left over is going to go back to Treasury,” Arlan Melendez, the chairman of the Reno-Sparks Indian Colony, said in a June 19 video. “Some tribal leaders have said, ‘This is a setup by the federal government and Treasury for us to fail so that they can come in and pick our pockets.’”

Will Congress do more?

The federal government has not published data on the shares each tribe received in the first batch of funding under the March law. The Harvard Project on American Indian Economic Development estimated 17 Nevada tribes received about $100 million.

The U.S. House passed another $3 trillion relief bill in May, though the Republican-controlled Senate has not taken it up. Senate Majority Leader Mitch McConnell said the chamber would consider its own relief measures in the coming weeks.

The House bill would provide $20 billion to help tribes with the fiscal impacts of the pandemic and $2.1 billion for the Indian Health Service.

Once the Senate begins its process, leaders of both parties could negotiate a larger package. While Republicans have largely panned the House bill, its IHS provisions could win bipartisan support.

“The Indian Health System serving tribal communities in Nevada is in dire need of additional funding for both services and infrastructure improvements,” Cortez Masto said. “Congress must continue working to enable IHS to quickly and efficiently use these funds to provide for the health care needs in Indian Country.”

“As Congress looks to future COVID-19 relief, I will continue to work to ensure that the needs of Tribal communities are addressed,” Rosen said.

“While the CARES Act provided some relief for Native Americans, I hear directly from my constituents that more assistance is needed,” Titus said.

Democratic Reps. Susie Lee and Steven Horsford did not return requests for comment.

Rep. Ruben Gallego (D-Ariz.), the chairman of a House subcommittee on Indigenous Peoples, said he anticipated the provisions of the House-passed bill related to IHS funding would likely remain part of a compromise bill. He said members of both parties are now more aware of the needs of Native people during the pandemic.

“We’re getting to the point where they’re not an afterthought every time there’s funding,” he said. 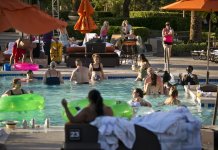