The City of North Las Vegas is using federal coronavirus relief money to incentivize students to unenroll from Clark County School District and participate in a facilitated homeschool learning environment.

North Las Vegas officials on Tuesday announced the creation of the Southern Nevada Urban Micro Academy. It’s described by the city as a “groundbreaking public-private partnership between local government and microschool providers” that “offers student-centered, city-supported K-8 education options for the fall semester.”

The program will have parents unenroll their child from CCSD citing intent to homeschool as their reason. Then, students will be placed in physical classrooms of up to 18 children and receive instruction and educational programming provided by one of two third-party education companies — Arizona-based Prenda or Massachusetts-based National Summer School Institute. According to Don Soifer, president of Nevada Action for Public School Options, the private nonprofit partner involved in the program, instruction will primarily happen online through programming headed by “a crew of national master teachers from across the country” with assistance from in-person teachers aides who can work with kids, tutor and lead on non-academic parts of the school day (such as gym). They’re calling this a “microschool,” a nebulous term used to describe a variety of schooling options that don’t neatly fit into existing schooling categories like public, private or charter.

This microschool option will cost parents $2 per day.

An alternative option being offered by the City of North Las Vegas is available for students who wish to stay enrolled within CCSD. This option will also divide children into classrooms of up to 18 students and allow them to participate in the remote learning provided by their district school. While daily schedules and instructional plans vary from school to school, CCSD is requiring a certain number of minutes of synchronous live instruction per day or week, depending on grade level. Those physical classrooms will be similarly staffed with aides assisting students and providing non-academic enrichment, according to Soifer, whose group is doing the hiring for both tracts.

This CCSD-compatible option will cost parents $20 per day.

North Las Vegas Councilwoman Pamela Goynes-Brown said the $20 price was set based off existing before- and after-school programming, and the $2 option was created to incentivize students into choosing the microschooling option, which they believe will be more rigorous.

To fund the program, North Las Vegas is pulling from its $320,000 tranche of CARES Act funding earmarked for childcare assistance. More than half of that amount — $179,000 — will go to Nevada Action for School Options. A chunk of that will go toward Prenda, the Arizona-based company whose platform and programming will be used. According to Soifer, the nonprofit is currently in the process of securing grant funding to help with costs not covered by the CARES funding provided by the city.

The city can currently accommodate approximately 360 students across the two recreation centers it has designated for the programs. But Goynes-Brown says if the demand is there the city will consider expanding to other public buildings, such as libraries, city hall or county-operated recreation centers.

The microschooling program is billed as a solution to the education and childcare issues facing students and their families this upcoming school year, and the city has said it will prioritize students of first responders and essential workers.

But education advocates worry the program could further exacerbate the financial problems facing traditional public schools. Public schools receive state money on a per-pupil basis. The fewer the students, the fewer the dollars received by school.

“We applaud the innovation that provides supports for CCSD students who may struggle with or need help in navigating distance learning, but urge caution on any option that requires students unenroll from the district,” wrote an Educate Nevada Now spokesperson in an email. “Parents should be made aware that unenrolling could have consequences for their neighborhood schools, such as reduced staffing and resources, that could affect their child’s education post-COVID.”

In an emailed statement, the Clark County Education Association did not address the North Las Vegas microschooling program or its potential impact on district schools, but did write, “We look forward to monitoring the progress of this project as it relates to educating CCSD students using their facilities to engage in distance learning with their CCSD teacher.”

CCSD School Board Trustee Linda Cavazos said on Twitter that she did not know about the microschooling program and learned about it from the local news media. Similarly, when she was asked on Twitter for her thoughts, Trustee Deanna Wright responded: “Discouraging, Blindside, Flabbergasted, MAD!”

It is unclear whether any of the school board trustees or district officials were consulted or even aware of the North Las Vegas microschooling program prior to its announcement Tuesday. Requests from the Current to the CCSD’s communication office were not returned.

Goynes-Brown said the city is aware of the potential negative impact the microschooling component of their program could have on CCSD schools.

“We did take that into account,” she said. “However, right now our focus is on providing the best, safest educational space for kids who would be at home without the support they need. We don’t want that educational gap to grow. We want to keep students as close to grade level, or beyond.”

“No doubt if families do that it would cost their budget dollars,” he said. “That’s a concern about education funding as a whole.”

Soifer, who sits on the Nevada State Public Charter School Authority Board, said there are funding models that could better support a diverse educational ecosystem of district schools, charter schools and microschools.

“There’s no reason why something like this should need to cost them dollars,” he added.

Soifer says interest in microschooling has been on the rise in Nevada since even before the onset of the pandemic. He hopes that as it becomes more popular Nevada might revisit some of its laws and regulations about school funding.

But like Goynes-Brown he says he’s focused on immediate concerns.

“This particular thing is about North Las Vegas wanting to do something for their employees and residents,” he said. “There are a lot of kids being left at home.”

Soifer says that during one 30-minute period Tuesday afternoon his office fielded 40 phone calls about the North Las Vegas programs.

Spokespersons for Clark County and the City of Henderson confirmed those municipalities are not currently exploring a microschooling program. Both municipalities, as well as the City of Las Vegas, are offering daytime supervision programs where students can participate in the remote learning provided by their current school. All are charging $20 per day, with some financial aid available for qualifying families. 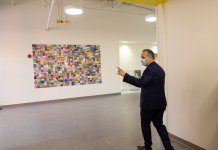