The number of people enrolled in Nevada Medicaid is growing, and that increased demand could strain a program already battered by millions of dollars in budget cuts.

Medicaid Administrator Suzanne Bierman told lawmakers on the Interim Finance Committee Thursday the program is closely watching its caseload and utilization rates, and that increases in either could have “major implications” for the budget.

Legislators cut $130 million from Medicaid last month during the 31st Special Session in order to balance the budget for Fiscal Year 2021, which began July 1. Since that special session concluded, additional federal dollars have come into the state to support the program, but administrators haven’t used it to restore any of the budget reductions — partially because of the uncertainty of what caseloads and utilization rates might look like going forward.

Projecting future needs is difficult because there are myriad volatile factors involved, cautioned Bierman. “It’s hard to know anything with absolute certainty.”

But one thing she does know is that the number of Nevadans qualified for Medicaid has increased 11 percent since pre-COVID-19 in February. Bierman pointed out that when she addressed the Nevada Legislature in July the caseload had increased 9 percent compared to pre-COVID-19.

“So we are seeing very real increases in our caseload,” said Bierman, “even just over the course of the one month since we last discussed this topic.”

A Kaiser Family Foundation national analysis of job losses that occurred from March 1 through May 2 found that almost half (48 percent) of people in families with unemployed workers who lost employer-based health insurance would be eligible for Medicaid or CHIP (Children’s Health Insurance Program). An additional 31 percent would be eligible for tax credits through the Affordable Care Act.

Only one-fifth (21 percent) would be ineligible for any subsidized plan.

Federal law requires most companies with 100 or more employees to submit advance notices to states and employees before a mass layoff event. Numerous companies have informed Nevada’s Department of Employment, Training and Rehabilitation that layoffs are coming. In many cases, the layoffs are simply making existing furloughs permanent.

And those two companies are hardly outliers for a state heavily dependent on tourism and its ancillary industries.

When exactly any permanently laid-off workers will lose any existing employer-based health insurance will vary by company. Bierman said state analysts believe “a large portion” of the people set to be laid off this year will qualify for Medicaid.

Democratic Assemblywoman Maggie Carlton, who chairs the Interim Finance Committee, asked Bierman whether the department has the resources needed to handle a tsunami of applications to Medicaid.

Bierman said the department is already working with the Nevada Department of Welfare and Supportive Services, which takes in applications and determines eligibility for the most prominent safety net programs, including Medicaid, SNAP, WIC and TANF.

“We are trying to make it seamless and painless,” she added. ”We know it’s on the radar.” 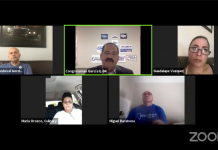 Wrong Side of the Tracks: LV redevelopment misses Westside