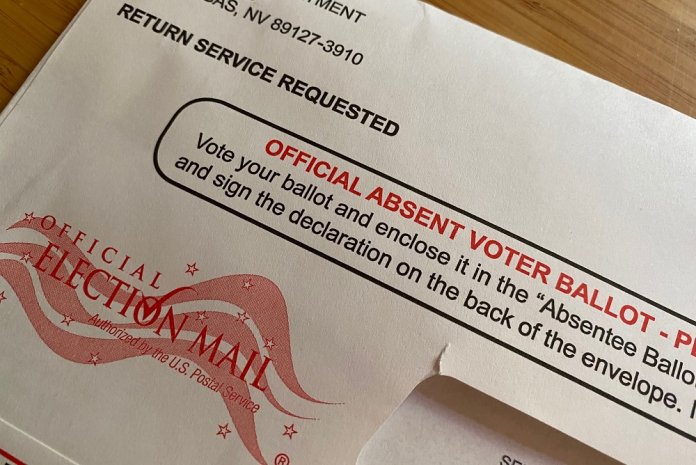 [Editor’s Note: This article is being updated as new information about the 2020 general election is released. It was last updated on Sept. 16]

The 2020 general election is closer than you think.

Nevadans will have the ability to start casting their votes as early as late September. That’s because Nevada will be mailing ballots to all active registered voters for the general election as part of a “hybrid election” that still offers in-person voting opportunities.

What exactly does that mean? Let us explain.

Election Day is Tuesday, Nov. 3. Early voting will run Oct. 17 – 30. Vote-By-Mail will begin as soon as people start receiving their ballots (more on that in a minute).

What you need to do right now

Make sure your voter registration is up-to-date. If you are not registered to vote, register to vote. You can do both of those things at RegisterToVoteNV.gov.

If you are uncertain, login to Clark County’s Voter Services website. It clearly indicates whether you are considered active or inactive.

When to expect your ballot

Nevadans should start receiving ballots in the mail in late September or early October, according to the Secretary of State. Ballots are handled by counties, so some counties may receive them earlier than others. Large counties like Clark and Washoe may also see ballots arrive in waves.

Clark County election officials have said they will begin mailing out ballots on Oct. 7. The county’s election materials advise anyone who does not receive their ballot by Oct. 17 to contact their elections office at (702) 455-VOTE (8683) or [email protected].

How to return your ballot

Your ballot will come with a prepaid return envelope (which you’ll have to sign). You can use that envelope (and only that envelope) to return your ballot through the post office. Your ballot must be postmarked on or before Election Day (Nov. 3) and it must be received by the county on or before the seventh day after the election (Nov. 10). The general recommendation here will be that sooner is better because it allows for that processing and delivery.

Clark County is directing anyone who would like to track their ballot return to the U.S. Post Office’s “Informed Delivery” free service. You’ll also be able to check whether your vote has been processed by logging onto the Clark County Registered Voter Services website and looking under “voter history.”

Clark County is providing numerous ballot drop-off locations for the general election. Residents will be able to drop off their ballots beginning Sept. 28 through Oct. 29 at several government offices. During the two-week early voting period (Oct. 17 to 30) and on Election Day (Nov. 3), all voting sites will double as mail ballot drop-off locations.

Ballots need to be dropped off by 7 p.m. on Election Day.

Hours and days of operation vary by drop-off location. Government offices are closed on Fridays and weekends, for example. So, you should double check those before dropping off your ballot. (Click here for a list of drop-off locations.)

Physically dropping off your ballot is a good option for anyone who does not want to vote in-person but is wary of returning their ballot via the post office.

However you do it…

Voters are not required to use the mail ballot. You can opt to vote in person.

You can also opt to not vote at all, but you would never do that, because you understand your vote matters, and elections matter, and you will do your civic duty.

Voters are being encouraged to participate via mail, but Clark County will operate 35 physical vote centers during early voting and “more than 100” on Election Day for anyone who needs or prefers to cast a ballot using a traditional voting machine. You are not restricted to a polling place within your precinct and can visit any vote center within the county.

If you opt to visit a physical vote center this fall, you will need to either surrender your mail ballot or sign an affidavit stating you are not voting twice. (If you attempt to vote twice, election safeguards will catch it.)

On Election Day, vote centers will open at 7 a.m. and anyone in line by 7 p.m. will be given the opportunity to cast their ballot.

Due to social distancing requirements and occupancy restrictions, some of the places you may have voted at during previous elections may not be vote centers this year — or they may look different. So, double check before you head to the polls. A list of Election Day sites has not yet been released by the county but we’ll update this article once it has.

If you want to do more…

As for what’s on the ballot…

The soul of the nation, some are saying. The marquee election is obviously between Donald Trump and Joe Biden, but there are dozens of races beyond that. Many of the outcomes will have very real, tangible impacts for Nevadans. There are also five statewide ballot questions covering the issues of same-sex marriage, voting rights, higher education, renewable energy and pardons. The Current will have additional information on races and ballot questions in the weeks to come. In the meantime, you can click here for a complete list of races in Clark County.

A lot of misinformation is spreading about the upcoming general election. The Nevada Secretary of State’s office has a handy Myth vs. Reality handout that addresses many of these concerns.

When will I get my 2020 general election ballot? And other questions answered.