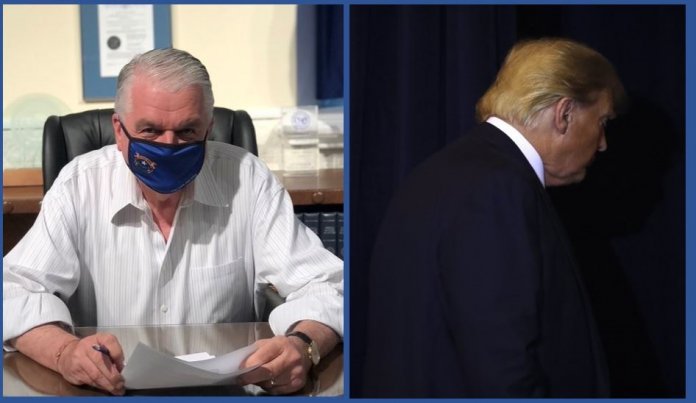 “Outrageous!” Adam Laxalt, the face and presumptive future of the Nevada Republican Party tweeted Wednesday, on the news that Donald Trump had canceled his Nevada rallies in Reno and Las Vegas this weekend.

“Welcome to Sisolak’s Nevada – home of partisan political retribution. This is unprecedented – to cancel an incumbent President’s campaign stop inside 60 days of a major contested election in a swing state. This isn’t over!”

Laxalt’s aspirational view of Nevada – that it’s a swing state – aside, this is really quite some admission.

Donald Trump, the Donald Trump, the strongest, toughest, smartest, simply greatest president in the history of this or any other nation (according to Donald Trump), was forced to cancel campaign rallies, was muscled around, by … Steve Sisolak?

That Steve Sisolak? The one who starts weeping every time he talks about not being able to visit his mom on a holiday?

Donald Trump is letting that guy tell him what he can and can’t do?

If Trump can’t stand up to Sisolak, how is he going to stand up to authoritarian strong men like Kim Jong Un, Recep Tayyip Erdoğan, or Vladimir Putin?

Conspiracy or screw up tho?

Laxalt, who is Trump’s Nevada campaign co-chair, is trying to salvage a fiasco by making the Nevada GOP’s default move: Blame Sisolak first.

To recap, icymi, etc., the Reno-Tahoe Airport Authority told the company leasing the building where Trump was to hold a rally Saturday that it couldn’t, because it would violate Sisolak’s directive prohibiting public gatherings of more than 50 people. And so the company told Trump oh hey sorry no rally for you or we’ll lose our lease.

A similar scenario appears to have played out with the airport in Las Vegas, where Trump was planning to hold another rally hosted by a business with an airport lease.

Sisolak — aka History’s Greatest Monster, if you are Adam Laxalt — took to twitter Wednesday to say “Who, me?” or words to that effect.

“The Governor’s Office had no involvement or communication with the event organizers or potential hosts regarding the proposed campaign events advertised by the Trump campaign,” read a tweet in a mini-thread from the governor’s official account.

“The Nevada-specific White House recommendations have consistently included recommendations to limit the size of gatherings for weeks now,” added another tweet from the governor’s office.

Which when you think about it is some pretty good trolling of Trump  — and Laxalt.

Being a state chair or co-chair for a presidential campaign is typically a ceremonial, even honorary, position, designed to showcase some local luminary’s support, and maybe give said luminary a measure of approval with the area faithful in return.

But the national campaign must involve state officials, no matter how ceremonial, in discussions prior to holding a rally in their state, no? As a courtesy if nothing else?

Laxalt, the state Republican Party of which he is the face, the party’s pet columnist at the newspaper owned by the guy who owns both Laxalt and the party, and all their friends, allies and bots have spent the last several months whining about Sisolak closing down this and refusing to open that.

Someone — someone local — must have reminded Trump’s campaign that a rally would violate “King” Sisolak’s coronavirus directive, so a plan better be in place to deal with that, no? As a courtesy if nothing else?

Then, in possession of some facts (admittedly a counterintuitive turn of events in the Trumposphere but just play along m’kay?), the campaign might have considered not alternative facts but alternative venues? Maybe venues that aren’t reliant on leases with public agencies?

A Trump apparatchik Wednesday said Trump will still do some as yet indeterminate event in Nevada this weekend. That would be in addition to a fundraiser, which is the important thing. No, seriously, that is the important thing. Trump’s campaign has burned through an absurd amount of cash on silly expenditures, is showing signs of pulling back from Nevada and Arizona, and needs money to focus on bigger fish.

In the meantime, Laxalt, who fancies himself the thinking man’s Michele Fiore on coronavirus issues, is responding to cancellation of the rallies by suggesting the great and powerful Sisolak personally ordered them shut down in an arbitrary and authoritarian act of “partisan political retribution.”

In other words, according to Laxalt, Trump – Trump! – got owned by a little known Democratic governor of a relatively small state.

Sigh. As is so often the case when Republicans say something, if only t’were true.

Sisolak’s fierceness and boldness exist only in the imagination of Nevada Republicans.

When Sisolak has made dramatic decisions over the last several months, he’s often taken the resort industry’s cue, and if an issue or problem — unemployment, for instance — isn’t a priority for the industry, Sisolak’s actions have been tentative, even feckless.

When it became clear falling revenues would not cover costs of education, health, and other social services and public programs, Sisolak made a beeline for budget cuts, like a common Republican, even as it was obvious not all industries in the state were suffering during the pandemic and in fact some were thriving. There was nothing bold or “kingly” about that. It was the opposite of bold and commanding.

It would be nice, sort of, in a way, if Sisolak had all the gumption and guts Republicans ascribe to him — which is what it would take to deliberately trigger a full-on confrontation with Trump and Trumpism, and all the ugliness that has entailed lately, by perpetrating an act of “partisan political retribution.”

Note to candidates: Taxing 1% must be paired with unrigging Trump’s...