After testifying last month that three Nevada juvenile girls sentenced as adults were housed in an unknown facility in Arizona, the Nevada Department of Corrections later told lawmakers it is only one.

At an Aug. 28 meeting for the interim committee for Child Welfare and Juvenile Justice, lawmakers were surprised when told that because of the lack of facilities in the state, multiple juvenile girls were shipped to another state, and were further baffled that corrections officials couldn’t provide additional details.

In an interview Wednesday, Assemblywoman Daniele Monroe-Moreno (D-Clark), who co-chairs the committee, said she has since received corrected information that two girls sentenced as adults were placed in an Arizona facility, but one has since aged out.

“It would have been great if the presenters at the hearing were better prepared so that the answers they gave us were much more accurate,” she said.

Another concern brought up during the August hearing was whether it was a state-run or private prison — Nevada banned the use of private prisons in 2019. Monroe-Moreno learned a state-run facility is housing the youth.

“One of the other questions I had asked was what was the cost to Nevada and if it would be more cost effective to leave her here and find her some type of housing here in our state as opposed to paying the out of state facility,” she added.

Monroe-Moreno said corrections officials have subsequently informed there is no additional cost to housing incarcerated Nevadans in Arizona. “There is an interstate compact. Nevada and Arizona have an agreement where inmates they deem for whatever reason can’t be in their system can be sent here and vice versa,” she said. “We don’t pay either state money and we calculate the number of days and then at the end of the year one state may owe the other state more days because you have less inmates. But no actual money is exchanged between the states.”

Even though only one girl is currently housed in Arizona, Monroe-Moreno says she knows of other high-profile cases in the past where girls sentenced as adults previously had been housed in Arizona.

“Ideally, what I would love to see — and I don’t know if we will ever have the financial resources for that — is to have two-to-three, regionally located facilities just for our juveniles who cannot be housed in a local juvenile facilities and who are not of age to be at an adult facility,” Monroe-Moreno said. “Not just for housing, but for programming for these youth. At the end of the day, they are still children. I would love to have a facility to stay in until they are 21 to 25. All research has pointed to the fact the human brain is still developing until then. As you know, that’s a huge fiscal ask. Even if we had the money to build the facility, then we would have to put in the staffing to run the facility.”

In a 2018 report, the ACLU of Nevada deemed Nevada was ill-equipped to house youth sentences as adults.

In addition to warning the lack of accommodations could lead to girls being placed in segregation or shipped out of state, the report highlighted the lack of educational opportunities and physical activity for boys housed at the state’s adult facility. (The August presentation reported that 12 boys are at the Lovelock Correctional Center in Northern Nevada.)

Legislation passed in 2019 sought to further study the issue and find out what costs and resources the state would need to place youth in a separate facility.

Even as the committee works through questions and expects to get more information ahead of its final meeting scheduled for Sept. 28, Monroe-Moreno said there is more work to be done to create a better outcomes for youth entering the justice system, including systemic changes.

“We have to stop categorizing inmates in general, especially our children,” she said. “Oftentimes kids commit crimes because of the situations they grow up in or the environment they’ve been raised in. Sometimes these are crimes of self-defense and protection. I think when we deal with children, we always have to remember they are children first and then deal with the crimes that were committed.”

Considering the financial crisis federally and statewide, Monroe-Moreno wasn’t sure how much funding is available to invest in solutions.

“We as a society have to find a way to stop failing our children,” she said. “All of that takes money.” 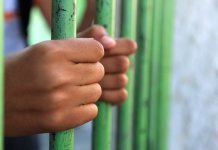 Lawmakers get corrected information on juvenile inmate housed in Arizona