Nevada wages down from a decade ago

Under the original White House proposal, now being rolled into the budget resolution process, Nevada could receive $212.9 million in investment, which would bring the state’s total home care workforce to 15,645. (Photo by Joe Raedle/Getty Images)

At the peak of the pandemic, DiAsio says he lost about 20 percent of his clients, some out of concern for exposure to the virus and others who suddenly had family members in lockdown and available to fill in.

“Most have come back.  Some have not,” he says. “Still, we’re finding there’s plenty of demand.”

DiAsio also lost workers.  Some feared contracting the virus, he says.  Others, buried under an avalanche of their own increased familial responsibilities, quit their jobs.

And yet others, according to industry advocates, likely quit to take advantage of CARES Act unemployment benefits, which paid more than their wages.

Di Asio says his company cares for 600 seniors in Southern Nevada each day, thanks to 300 caregivers who average two clients each.

“We could use another 50 caregivers tomorrow,” he says.

A policy report from the Guinn Center says Nevada has 13,000 personal care aides and will need an additional 10,000 workers to meet demand by 2040.

Home care is the fastest growing occupation in America according to the U.S. Department of Labor, which counted 3.25 million paid caregivers in 2018.  That is is projected to grow by more than a third by 2028.

Of the 20 million elderly adults and people with disabilities who need help with daily living, 17 million live in their homes.

Home care workers, or personal care aides, provide the basic services that allow America’s aging Baby Boomers and disabled individuals to remain in their homes and avoid costly and infection-prone nursing homes and other congregate care.  Home care workers are not permitted to provide medical care and are not covered by Medicare.

On the other hand, home health care aides provide many of the same services as home care workers, but are allowed to provide some health care and are covered by Medicare.

“Someone turning 65 today has a 70 percent chance of needing long-term care; 20 percent over 65 will need this support for five years or longer,” according to a report released last week by PHI, an advocacy organization for extended care providers.

Aging at home has long been critical to seniors who hope to maintain their independence and dignity, and even more so since the pandemic.

Home care workers afford “dignity and privacy to individuals who need support and prefer to receive it in the comfort of their home rather than in an institutionalized setting,” the Guinn Center report says. “The career, while rewarding to so many personal care aides, can be physically taxing and emotionally exhausting.”

They bathe, dress and groom their clients, and in some cases perform light housekeeping and help with grocery shopping, often visiting multiple clients in a single shift.

In 2016, Medicaid spent $167 billion on long-term support services — more than half of it on in-home care.

But according to experts, the sheer number of aging baby boomers and meager reimbursements to providers threaten the ability of seniors and the disabled to remain at home at a time when congregate care can be deadly.

Today, personal care aides in Nevada earn $23,000 a year, on average, according to the Guinn Center.

DiAsio wouldn’t say what he pays his workers.

His company even provided paid leave for caregivers required to quarantine, a rarity in the home care industry.

The majority of home care is funded by Medicaid, and the report from the Guinn Center says recent cuts to Medicaid reimbursement rates in Nevada threaten to lower wages, even for workers in the private pay market.

Nevada’s reimbursement rate of $17 an hour remained the same for close to two decades until lawmakers increased it by .60 in 2019.   That increase was slashed this summer as legislators cut the state’s spending by one-quarter.  The new reimbursement rate is $16.52.  Of that, only about $11 an hour trickles down to the worker.

“It’s not a huge part of our business,” DiAsio says of Medicaid. “But enough that you feel a six percent cut. I’m sure there are some Medicaid providers that will go out of business. We weren’t even making money at the $17.60 rate.”

Earlier this month, Addus Homecare, which employs 300 home care workers, announced it was pulling out of Nevada because of the low Medicaid reimbursement rates.

“It’s going to be interesting to see what happens when the minimum wage peeks at $12,” DiAsio said of Nevada’s incremental annual increases in the minimum wage, which reaches a maximum of $12 an hour in 2024. “They (Medicaid) should at least be bumping their rate to compensate for our increased labor cost.  Our caregiver is our piece of equipment.”

“With nursing homes stretched to the limit and a major source of concern due to COVID outbreaks, why would the state make it even harder for consumers to get the home care they need and workers to stay in this industry?” asks Brian Shepherd, Chief of Staff of SEIU Nevada, which is organizing home care workers. “In a budget and public health crisis, pushing people into high cost nursing homes makes no sense.” 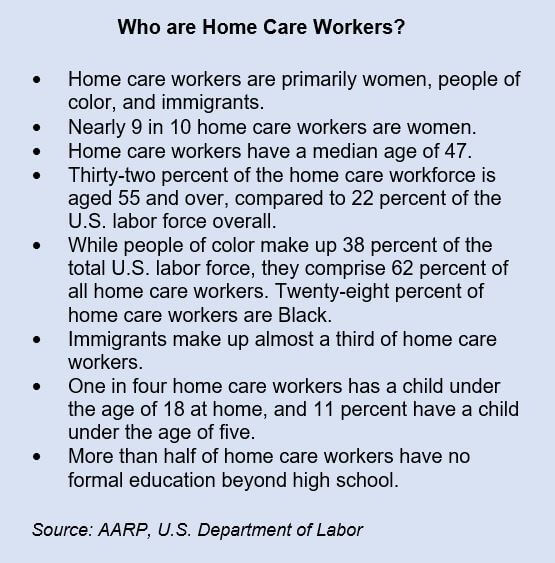 According to AARP, the majority of home care aides are women of color who struggle to make ends meet.  Their shifts are long, ensuring clients are fed throughout the day. Much of their time is uncompensated, spent travelling among multiple clients’ homes, where they often spend just a few hours.  Only three out of five work full time.  Most have no health insurance or paid time off.

“My clients count on me for their most basic needs, but we often face a very difficult choice: go to work sick and place our vulnerable clients at risk —or take a day off with no pay,” says Kismet Evans, a Las Vegas home care provider.

AARP says “the vast majority of services provided in the home are provided by family caregivers,” who provide help to some 10 to 15 million individuals.

Nevada Medicaid clients can choose from home care provided through an agency or through a process known as self-directed care, in which the client is budgeted an amount and given responsibility for hiring, training and terminating caregivers.

“Self-Directed Care is available throughout the state of Nevada and offers flexibility in not only choosing the provider, but also in determining when and how care should be provided,” according to the state’s website.

In Nevada and other states, family members, except spouses and legally responsible individuals, can be paid for providing care to a relative.

The reimbursement rate for family caregivers is the same as that paid by an agency, with an intermediary receiving a fee to handle billing.

Efforts by unions such as SEIU to collectively bargain for home care workers have been challenging, in part because of the plethora of agency employers.

An Obama administration rule change alleviated the union’s need to do so, allowing states to deduct dues directly from Medicaid reimbursements, even those of self-directed clients.

“The January 16, 2014 final rule impermissibly expanded upon the statutory exceptions to create a new category of entities that can receive all or part of a Medicaid provider’s reimbursement,” the Trump administration said in announcing an end to the practice. “This rule restores the direct payment rule to what we believe is its proper scope, and puts Medicaid providers back in control of their reimbursements.”

Meredith Levine, Director of Economic Policy for the Guinn Center, anticipates a full-court press in Carson City next year to restore the reimbursement rate.

“We’ve been back to the Legislature the last three sessions trying to explain to them the issues.  We got three percent after 20 years and now that’s gone,” he says. “It’s the lack of willingness of Nevadans to pay taxes.”

The Great Resignation: Data and analysis show it’s not as… by Jay L. Zagorsky January 14, 2022
Animal Foundation slashes services to public by Dana Gentry July 7, 2022
How the child tax credit became a lifeline for Nevadans: 'It… by Michael Lyle December 27, 2021