Since May, food banks in Nevada have relied on a government-sponsored nutrition program to keep up with growing demands during the pandemic. But the latest batch of boxes includes more than just vegetables, cheese and meats.

They include a letter signed by President Donald Trump.

The U.S. Department of Agriculture has started requiring all groceries distributed through the federal Farmers to Families Food Box Program to include a one-page letter. Printed in both in English and Spanish, the letter includes general safety tips for preventing COVID-19 transmission but also includes statements from the president.

“As President, safeguarding the health and well-being of our citizens is one of my highest priorities,” reads the letter. “I prioritized sending nutritious food from our farmers to families in need throughout America.”

Trump does not mention the upcoming Nov. 3 election.

Still, the language of the letter — and the act of requiring its distribution — have been criticized as possible violations of the Hatch Act, which prohibits federal employees from using government property for partisan political gain.

The letter is reminiscent of the Trump-signed $1,200 stimulus checks that went out to Americans in April.

Funded by the USDA, the $4 billion program awards contracts to distributors and wholesalers impacted by the widespread closure of restaurants, hotels and other food service businesses to purchase fresh produce, dairy and meat products. The vendors then place the products into a pre-approved box designed to be a comprehensive mix of food for people to cook with and given to organizations like food banks and nonprofits who then give the entire box to those in need.

Three Square food bank in Southern Nevada, the only food bank in Clark County, said after the first set of boxes including Trump’s letter were distributed on Sept. 24, the food bank added its own letter given with the box contextualizing the one from the president.

“In these boxes – and for the first time in the history of commodity programs dating back to the 1930s – you may find a letter from the President of the United States,” reads the letter. “Three Square and our network of agencies appreciate the support of Congress and the White House, of the federal commodities program. We believe that hunger is a non-partisan issue, and the solutions to fight hunger require collaboration: between agencies, between political parties, and between neighbors.”

The letter also explains that the pre-packed box contains food funded through a federal program passed in March by Congress “including the support of all of Nevada’s Congressional delegation. Per the U.S. Constitution, it is Congress that approves federal spending.”

Vesta Foodservice, which was approved as a vendor for Clark, Churchill, and Nye counties under the program, has been approached by food banks concerned about the implications of the letter.

“They have let us know that they prefer not to have the letter in there because it implies, or could imply a political position, which the food banks and faith-based organizations don’t want to imply,” said Jin Ju Wilder, Director of Marketing & Business Development at Vesta Foodservice. “But we don’t have a choice. It’s required by our contract.”

Added Wilder, “We are required to put the letter that was supplied by USDA in the box, so that’s what we’re doing.”

A spokesperson for the USDA said the letter from Trump has been included in food boxes for several months now and contains health information that is critical to slowing the spread of COVID-19.

“Politics has played zero role in the Farmers to Families food box program – it is purely about helping farmers and distributors get food to Americans in need during this unprecedented time,” said the spokesperson in an email.

“In addition to benefiting from fresh produce, dairy and meat products, Americans in need also are receiving essential information about how to protect themselves and others from COVID-19,” said Anthony Fauci, the director of the National Institute of Allergy and Infectious Diseases, in a statement.

The program has allowed Three Square to maintain the high-volume of food it distributes to families across Southern Nevada, which has grown significantly under the pandemic and resulting economic downturn.

A recent report by Feeding America, a nationwide network of more than 200 food banks including Three Square, found that the impact of COVID-19 on unemployment in Nevada will increase the food insecurity rate to 20.5 percent, equivalent to one in five individuals – or approximately 447,820 people – experiencing food insecurity.

Food boxes with the Trump letter have also started to be distributed in Washoe County since last week. The Food Bank of Northern Nevada has sent them as-is. So far, the food bank has distributed about 24,000 boxes of food containing the letter.

“The Food Bank of Northern Nevada is busy distributing these boxes from the USDA and other fresh food to the thousands of people who rely on our assistance,” said Jocelyn Lantrip, director of marketing and communications for the food bank. “We do not have a position on the letter and we operate as a non-partisan organization. We want to make sure that we are connecting food insecure families with the food that they need.”

The food bank has seen a 30 percent increase in the need for emergency food assistance in Washoe County and has distributed over 1 million pounds of food through the Coronavirus Assistance Program. 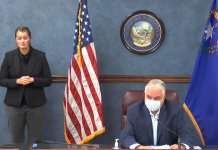