The 2018 “blue wave” brought Nevada its first Democratic governor in two decades and strengthened Democratic majorities in both chambers of the state legislature. But that wave stopped one state senator shy of creating a legislative supermajority that would have empowered Democrats to raise taxes without bipartisan support.

Twice now that has proven to be a legislative death knell.

During the 2019 legislative session, Senate Democrats tried unsuccessfully to secure bipartisan support for a bill that ended the sunset of a modified business tax. They instead passed the bill with a simple majority, citing a legal opinion from the Legislative Counsel Bureau saying a two-thirds majority was not required. Republicans disagreed and sued. A district court judge sided with the GOP and ruled the bill’s passage unconstitutional; however, the decision is being appealed and is expected to be heard by the Nevada Supreme Court.

One year later, during the 31st Special Session, Senate Democrats came close but ultimately failed to secure the support of one Senate Republican on a proposal to raise taxes on mining companies.

Now, with the state still facing myriad economic uncertainties amid a pandemic, the stakes for the upcoming general election are easy to see.

“It’s the ability for one party to control revenue,” said Greg Bailor, executive director of the Senate Republicans. “We lose all checks and balances in the Nevada Constitution. … We want to maintain that integrity and have a bipartisan revenue discussion.”

Cheryl Bruce, executive director for the Senate Democrats, says the majority party will always strive for bipartisan support on legislation, but she acknowledges that coming away with a supermajority would “certainly give us more options.”

She also defends the party’s previous actions, noting that the ultimate verdict is still out on the legality of the modified business tax, and arguing the public supports raising taxes on mining companies.

Senators in the spotlight

To secure a supermajority, Nevada Democrats need to hold their 13 current seats and flip one Republican seat. Their targets for flipping are seats filled by state Sens. Heidi Seevers Gansert and Scott Hammond.

Gansert is running for reelection in State Senate District 15 in southwest Reno. She is being challenged by Democrat Wendy Jauregui-Jackins. Gansert is the director of external affairs for the University of Nevada Reno; she previously worked for the Gov. Brian Sandoval administration and served in the Nevada State Assembly. Jauregui-Jackins works as an appraiser in the Washoe County Assessor’s Office. She has never held public office, but she has one notable political connection: her sister, Assemblywoman Sandra Jauregui.

Hammond is running for a third term representing State Senate District 18 in the northwest part of the Las Vegas Valley. Hammond is a former teacher who helped found a charter school and now works for the Nevada Contractors Association. He is being challenged by Liz Becker, a former teacher and environmental scientist who previously worked for Southern Nevada Water Authority.

To stave off a Democratic supermajority and retain their ability to block any proposed tax increase, Nevada Republicans need to maintain their existing eight seats, something Bailor believes the seasoned Gansert and Hammond can do in their competitive districts. But Republicans also see an opportunity to chip away at the Democratic majority in two other districts: State Senate District 5 and 6.

State Senate District 5 is an open race between Republican Carrie Buck and Democrat Kristee Watson. The district is currently represented by Democrat Joyce Woodhouse, who could not run for reelection due to the state’s term limits.

Woodhouse narrowly defeated Buck in 2016 by fewer than 500 votes. Buck played a part in a failed effort to recall Woodhouse. Buck is president of The Pinecrest Foundation, a network of charter schools.

Watson works for Spread The Word, a literacy nonprofit. She has previously worked as a banker and helped run her family’s publishing business during the Great Recession.

State Senate District 6 is currently represented by Senate Majority Leader Nicole Cannizzaro, whose day job is as a deputy district attorney for Clark County. She is being challenged by Republican April Becker, a real estate attorney who owns a law firm.

Less than 2 percent of votes propelled Cannizzaro to victory in 2016.

Cannizzaro was targeted in the same 2017 recall effort that went after Woodhouse. That failed effort sought to replace Cannizzaro with Becker. (Notably, Becker was not who Cannizzaro had just narrowly defeated. Republican Victoria Seaman was.)

Both parties stressed their emphasis on candidate recruitment this election cycle. Both are also hoping their races can benefit from the national political climate, albeit in markedly different ways.

What will voters focus on?

Pointing to the partisan battle to replace U.S. Supreme Court Justice Ruth Bader Ginsburg with Trump nominee Amy Coney Barrett, Bruce says she believes voters are beginning to see how state lawmakers connect to the federal legislation they care about, “from the Affordable Care Act preexisting conditions to women’s access to healthcare and their right to choose.”

“While we see how that plays out, at the state level we have a chance to protect access,” she adds. “What we are seeing is people are concerned about health care and they’re concerned about making sure we invest in public education. That’s on a lot of people’s minds. Those are things we are consistently pro.”

Bailor says he sees voters undergoing a “refocusing” on statewide politics. For Nevada that includes some notable blunders from the party in power, including having their state senate majority leader, Kelvin Atkinson, resign at the beginning of the 2019 Legislative Session amid federal charges for misappropriation of campaign funds, and pandemic-related issues like record high unemployment and lengthy delays with unemployment programs, which the public may lay at the feet of Democratic Gov. Steve Sisolak.

“The president is the president, we have congressional races every two years, but this is an opportunity for people to reengage with their local representatives,” he says. “The governor has had the economy shutdown more than 200 days to some extent and we haven’t seen a strong plan on how Nevada recovers out of that. I think people are really playing attention on local issues.”

Although they have opponents, Democratic state Sens. Dina Neal and Dallas Harris represent districts that lean blue and their defeats would likely be considered upsets. Similarly, Republican Pete Goicoechea has an opponent — Independent American Party candidate Tiffany Seeback — but is expected to easily win.

Only half of the state senate terms are up this year. The remaining seats will be up in 2022.

[Editor’s Note: An earlier version of this article incorrectly listed a Republican assemblywoman as running for Nevada State Senate. The reference has been removed.] 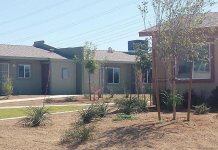 State must not only create, but preserve affordable housing

Legislative session, such as it is, convenes, sort of

Trump’s latest junk suit is just another episode of his anti-reality...