(Photo by Marcin Szmigiel from Pexels)

Nearly 30 percent of Nevadans in September said they had low to no confidence in their ability to pay rent in the coming month, according to a U.S. Census Bureau Household Pulse Survey.

The update comes as the state’s eviction moratorium ends and officials work to provide rental assistance through federal coronavirus relief money, which expires at the end of the year.

Brian Gordon with Applied Analysis said 11 percent of Nevadans didn’t pay rent last month but added the state is in a better spot than it was in prior months. The Census survey showed the number of people in Nevada not paying rent consistently remained in the double digits over the past several months topping of at 24 percent at the end of June. 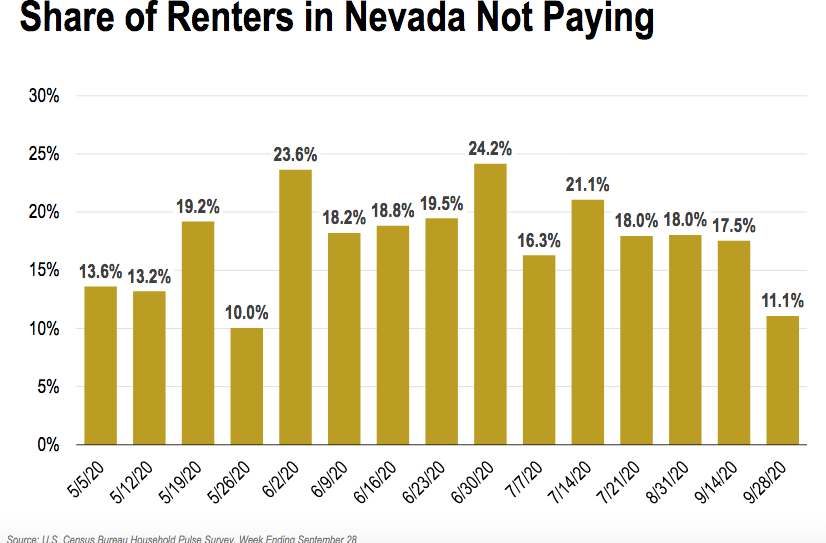 “As we are asking Nevadans to stay home for Nevada, it is important for them to have homes to stay in,” Nevada Treasurer Zach Conine told the panel Thursday. “We started working on residential rental assistance. To date, we’ve created something called the coronavirus housing assistance program, which is a statewide program administered by different agencies in different parts of the state.”

Clark County kicked in an additional $20 million while the City of Sparks assigned $2 million and the City of Reno allocated another $1.5 million.

(Fearing money was running out, the state paused the application process in Clark County in August while it sorted through the backlog.)

Steve Aichroth, the administrator for the Nevada Housing Division, said as of Oct. 8, Clark County had gone through $8.3 million, assisting more than 2,000 households.

Since coronavirus relief dollars come with a strict timeline and must be spent by Dec. 30, Conine said they are working to quickly get the money out.

In order to make it accessible for people to apply for and obtain assistance, he added the state has reworked some of the requirements to make the application process easier.

He added the Rural Housing Authority already adopted this model “and more money was put out during the first week of this program than the entire month of September.”

“We know it’s speeding up the process,” he said.

The Rural Housing Authority had previously disbursed $800,000 of its rental assistance, but with the new requirements is expected to spend $4 million by the end of the year.

Clark County launched its CARES Housing Assistance Program website Thursday, which can help people catch up on past due rent, including late fees landlords are now able to collect, starting from March 1. The portal also helps with utility assistance.

Recipients of housing vouchers such as Section 8 are not eligible for CHAP assistance.

“We have until December 30 to spend CARES funding,” said Clark County Commission Chair Marilyn Kirkpatrick in a statement. “So we encourage anyone who has lost their job or is working fewer hours and struggling to pay their rent or mortgage and utilities due to COVID-19 to go to the website and apply as soon as possible in order to keep a roof over their head. This will allow folks to bring themselves current on rent or bills, through the end of this year.”

While mounting unpaid rents have haunted both tenants and landlords, it has become more relevant as the state eviction moratorium ends.

The Centers for Disease Control and Prevention’s moratorium is in place until Dec. 31. Eligible tenants can submit a declaration to their landlord to prevent eviction, but it doesn’t forgive unpaid rent.

Tenants are still on the hook to settle unpaid balances or could face evictions starting Jan. 1.

The Nevada Supreme Court’s temporary residential summary eviction mediation also went into effect Thursday. It allows tenants and landlords to go through mediation prior to legal proceedings. Connecting tenants to rental assistance and agencies dispersing aid is one component of the mediation process.

One question is still looming: What happens in January when federal dollars are no longer available and landlords can evict?

Officials, along with legal groups, are still sussing out an answer, especially as talks on additional federal stimulus haven’t progressed.

When asked Thursday, Aichroth noted the state also received about $40 million in emergency solution grants and community development block grants, which were allocated to local jurisdictions and don’t expire for another two years.

He added the state is talking with the City of Las Vegas, North Las Vegas and Clark County to find out their plans for those funds. “Typically those funds are used for rapid rehousing and homeless shelters,” he said. “But they can be used for rental assistance.”

However, the process for using it for rent would be more difficult.

“We couldn’t help as many people because of the income limits that (the U.S. Housing and Urban Development) puts on it are capped at 50 percent (area median income),” Aichroth said. “Our program is currently at 120 percent of AMI. We need to find out how those jurisdictions are going to use the money so we can develop a statewide funding.”