The $20.8 billion in federal relief funds received by Nevada has propped up an economy devastated by the coronavirus pandemic. But with that money running out, and with no additional federal relief in sight, economists must now predict the state’s financial future over the next two years.

The data delivered over six hours of presentations to Nevada’s Economic Forum on Thursday did not paint a clear picture of what the state’s recovery might look like going forward, mused Chair Craig Billings.

One major takeaway from the presentations Thursday is that Nevada’s economic recovery is significantly dependent on factors beyond the state’s control.

Multiple presenters stressed that an effective Covid-19 vaccine needs to come to market and that additional federal assistance is needed to help keep the economy afloat until that vaccine can be distributed widely. That echoes previous statements that have been made by Gov. Steve Sisolak and other elected officials since the onset of the pandemic.

The Governor’s Office for Economic Development (GOED), Applied Analysis and Travel Nevada all presented projections that included “base” or “most likely” scenarios that assume a Covid-19 vaccine will become available within the first quarter of 2021 and that such a vaccine will become widely available within 12 months. They also assume Congress will pass a modest amount of additional stimulus funds, though the political parties are currently stalled. 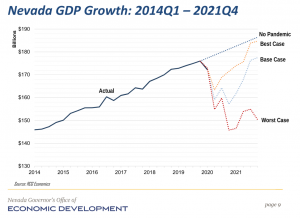 Jeremy Aguero from Applied Analysis said their model also assumes people are becoming willing “to adapt to living with Covid, as opposed to waiting for treatment or a vaccine.”

In the worst-case scenario, no vaccine proves viable, the winter brings spikes in Covid-19 and hospitalizations leading to more business shutdowns, and Congress continues to take no action on stimulus funds.

“It’s the long arch of the Covid crisis that keeps me up at night,” said Aguero, adding that he is “much less” concerned about Nevada’s economy operating at 25 percent for two months than operating at 70 or 80 percent for three years.

But the potential for just that is real.

Job growth, visitor volume growth and taxable sales growth are all expected to be down, though by how much varies by scenario.

Nevada and Hawaii saw the largest decline in real gross domestic product, down 42.2 percent. Both economies are heavily reliant on tourism. The national average was down 31.4 percent.

The Paycheck Protection Program (PPP) made up $4.2 billion of the stimulus funds and is covering roughly a third of all jobs within Nevada, according to Applied Analysis. That money is expected to run dry by the second quarter of 2021. 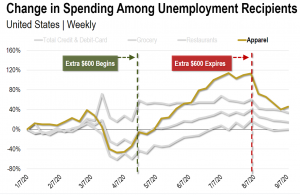 The one-time $1,200 stimulus checks and the $600 in additional unemployment benefits made up $6.8 billion of stimulus funds. That infusion of money revealed itself in data showing increased spending during the weeks that money was available.

Three-fourths of Nevadans spent their direct stimulus payments on expenses such as food, utilities and rent, according to a U.S. Census Bureau survey conducted at the end of September. Only 7.8 percent “mostly added to savings” and 15.5 percent used it to “mostly to pay off debt.”

Las Vegas Conventions and Visitors Authority CEO Steve Hill told the forum the stimulus was “exceptionally helpful” and that additional stimulus is needed moving forward: “We’ve got a (political) party who thinks we need $1 trillion. Another thinks we need $2 trillion. The result has been none.”

Due to its overreliance on gaming and tourism, Southern Nevada is bearing the brunt of the economic havoc. 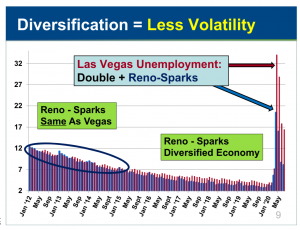 By August, the disparity between the regions remained. Reno reported a 7.2 percent unemployment rate; Las Vegas reported 15.5 percent. The statewide rate was 13.3 percent.

Leisure and hospitality make up 29 percent of employment in Southern Nevada. That’s the highest percentage among the top 10 tourism markets nationwide. (Orlando places second with 22 percent; the remaining eight fall between 10 and 14 percent.)

“We remain the least diversified economy of any city our size,” noted Aguero. “That will be problematic.”

While many Southern Nevada hospitality jobs have returned, the percentage is still significantly below any point of The Great Recession a decade ago. 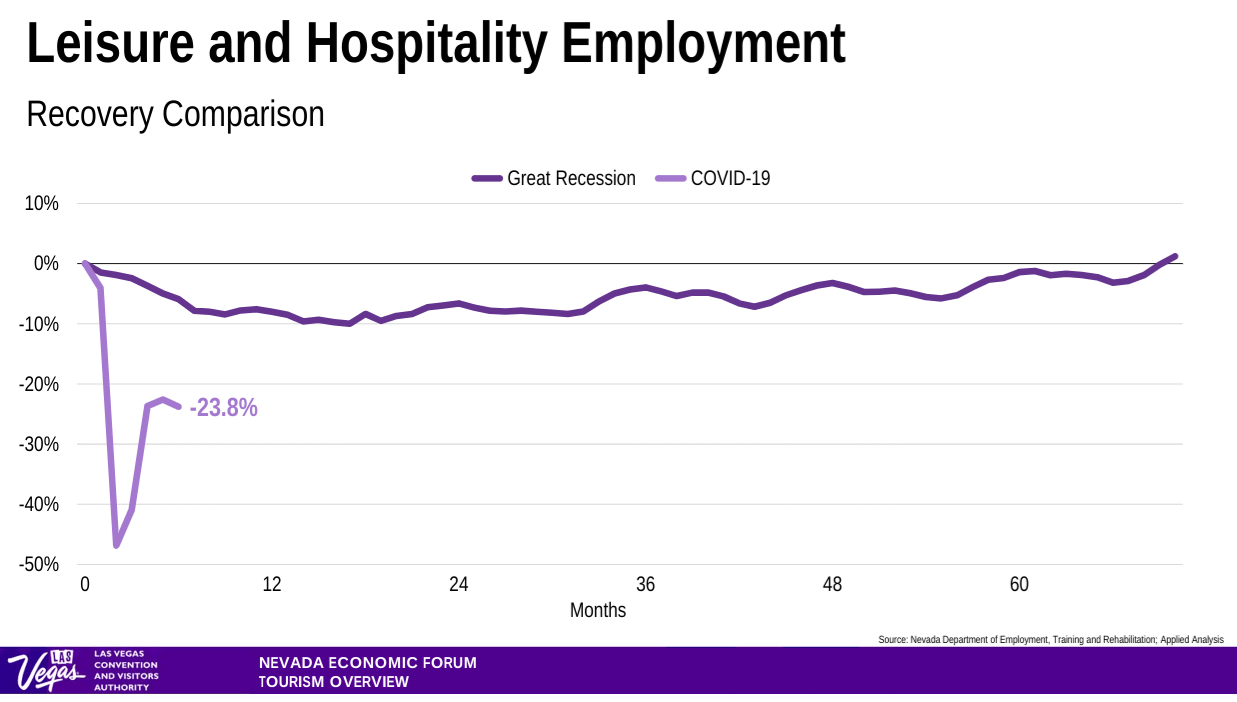 The Economic Forum is a five-member appointed panel of economists and taxation experts tasked with forecasting tax revenue for the state. Their forecast, which is due in early December, is what the governor uses to craft the budget for the upcoming biennium.

Legislative Counsel Bureau Chief Fiscal Analyst Russell Guindon emphasized how difficult the forecasting process will be, saying it will be harder than it was during the Great Recession. Typically the Economic Forum can use the actual revenue data and previous forecasts to their advantage. This year brings unprecedented unknowns, particularly with stimulus funding.

“We all think of the Great Recession. We modified the word recession with great. We look at these numbers and ask, what should we have called this?”

He later added, “I never would have thought in my career as an economist you’d show me an employment chart that looks like a bird flying into a window. It’s just crazy.”