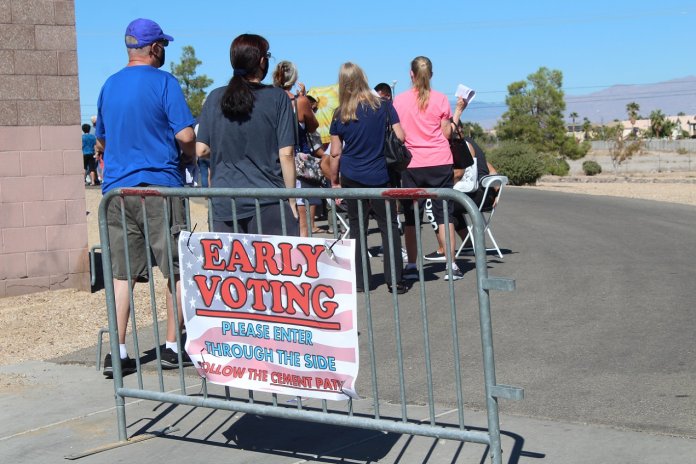 Early voting in Nevada started Saturday and despite the first day’s long lines early voting in Clark County was less than it was in 2016, replaced by a huge uptick in mail-in ballots.

In Clark County, about 27,000 people voted Saturday at 35 locations across the valley. Significantly less than the 39,000 who voted on the first day of early voting in 2016.

Some 87,000 mail ballots had been returned by voters in Clark County as of Oct 18, including ballots that were accepted or rejected and ballots needing signature cures. Of those ballots about 50,000 were from Democrats, 17,000 were from Republicans and 19,000 from neither party. The mail ballot tally is more than three times the 26,000 mail-in ballots returned in the first week of early voting in 2016.

Still, the chance to cast ballots on the first day of in-person voting had thousands of people waiting for hours to make their voices heard.

Eager voters stood in line for two hours at the Desert Breeze Community Center, where a line of about 150 people  wrapped around the parking lot an hour after doors opened. By the end of the day about 1,000 voted at the center.

Volunteers greeted and directed traffic as people arrived. The Asian Community Development Council passed out water and served free Indian food to those stepping out of the voting booth.

“We came to Desert Breeze because this area is where a lot of Asians are moving to and we decided to do it on the first day because we want people to vote early and if they have any questions we want to help them,” said Vida Chan Lin, president and founder of the Asian Community Development Council.

With fears about exposure to the coronavirus, election officials and advocacy groups have been encouraging people to vote by mail-in ballot. But for those who prefer to vote in person, early voting and election day voting are a welcoming option.

“There are people who aren’t very comfortable with the mail-in option and we want the Asian community to have somewhere to go where they feel more comfortable,” Chan Lin said.

The number of eligible Asian Americans and Pacific Islanders eligible to vote in the state grew 35 percent from 2010 to 2016, zooming past the 13 percent growth rate for all eligible voters statewide, according to APIAVote, which tracks demographic and voting data.

Angel Kuo, 45, is part of that Asian American voting bloc in Nevada who chose to vote early in person.

“It’s a really big election,” said Kuo, who voted for the Democratic candidate Joe Biden. “I figured it would be a good idea to get it done and over with.”

“I considered the mail-in ballot option but I didn’t go with that because with everything that’s been going on with the post office who knows what could happen,” Kuo said. “I figured if I come in, then for sure I know I came in and it got done and is entered in.”

Kuo, whose parents emigrated from Taiwan, moved from New York to Las Vegas 13 years ago. Kuo said she specifically came to vote at the center because of the Asian focused event.

“I think as younger generations get older and begin to understand more what’s going on and how it affects them and their futures and their families’ futures, I think there’s going to be a huge movement of Asian voters participating,” Kuo said.

While waiting in line, Kuo started a conversation with a woman who wasn’t sure if she was registered to vote or not and Kuo was able to help her through their shared language, Chinese. The woman ultimately did not vote for Kuo’s candidate, Joe Biden, but Kuo said she was happy she could help another Chinese speaker.

“I’d like to think if my mom was out there that someone would do the same for her,” said Kuo. “Everyone has a right to exercise their voice, that is what voting is about,” Kuo said.

The second day of early voting on Sunday saw another 23,000 early votes in Clark County with both parties — Democrats and Republicans — pulling about 9,000 votes each.

“I have nephews who are not very interested in politics,” said Maria Medrano in her native Spanish. Medrano is registered as non-partisan but voted for Biden.

Medrano emigrated from El Salvador to the United States almost 40 years ago but only became a U.S. citizen two years ago. This is her first time voting.

After looking at her mail-in ballot, Medrano said she questioned whether to vote at all, after being intimidated by the number of candidates in judicial races and the all-English language ballot, but after seeing news reports about large voter turnout she asked for help filling out her ballot so she could drop it off at the ballot drop box in the community center Sunday.

“If Trump wins I fear for our future,” Medrano said. “A lot is going wrong with people’s lives right now.”

Nevada Democratic Sens. Catherine Cortez Masto and Jacky Rosen voted at the East Las Vegas Community Center on the second day of early voting, ushered into the voting booth by women clad in traditional Mexican dresses and music from a mariachi band.

Cortez Masto — the first and only Latina elected as a U.S. Senator — said people should form a voting plan, whether it’s early voting, mailing in a ballot, or voting on election day.

“This administration has torn our families apart. They’re not focused on uplifting our community, just the opposite. They’re trying to divide us, call us criminals, lock up our kids, seperate us. That’s not good, obviously, for our community and that’s not who our elected leaders should be,” Cortez Masto said.

Medrano said her daughter caught COVID-19 and still has not recovered from some of the symptoms, including a monthlong cough.

“She had to go back to work because nobody else is working at home and someone has to work,” Medrano said, adding that Latinos have been the hardest hit by the coronavirus.

Holly Wellborn, Policy Director at ACLU of Nevada, said despite the swell in mail-in ballots, the ACLU and other groups are preparing for long lines throughout early voting and on election day, due to rhetoric to undermine sending a ballot via the U.S. Postal Service, which has caused distrust among many voters.

“I think no matter what we will see people who are showing up to vote in person the way they have in several states,” Wellborn said. “Nevadans are not used to voting by mail and we would be disenfranchising those individuals who want to vote in person.”

The ACLU implemented their voter protection program during early voting for the first time. The program, which aims to identify and respond to allegations of voter irregularities and intimidation, ran during the first day of early voting with about 200 people on the ground in Clark County.

“Sending your ballot through the U.S. Postal Service is completely safe and we encourage people to do it,” Wellborn said. “It’s the best way to keep yourself safe from the deadly virus and it’s the most convenient. Your ballot will get to the registrar.”

Election violence in November? Here’s what the research says