Nevada’s economic recovery is expected to be sluggish.

It’s also filled with potential hurdles that could further slow down progress.

Multiple economists and industry professionals appeared (virtually, of course) before the Economic Forum on Tuesday to offer insights and projections for how Nevada’s economy might fare over the next three years. Although their projections differed some, most believe it will take at least two years for the state’s major sources of tax revenue to return to pre-pandemic levels.

Moody’s Analytics economist Daniel White described the state as entering “the really boring and scary” portion of economic pre-vaccine recovery. The initial bounceback from businesses reopening after the mandatory shutdowns has happened. Businesses have adapted their operations when possible to meet ongoing restrictions. But many have reached the limit of what they can do.

Now comes the waiting — for restrictions to loosen or lift, for people to feel comfortable returning and spending money, for the pandemic to be over, or for the right cocktail of these factors.

The road to economic recovery is fraught with potential hurdles. All of the revenue projections assume an effective covid-19 vaccine is approved by the Federal Drug Administration in early 2021 and widely embraced by the masses over the subsequent months or year. That is seen as crucial to the nationwide containment of covid, as well as the return of international travel and large-scale events within Nevada.

The projections also assume Congress will pass additional federal relief funds early next year. That is seen as crucial to keeping sales tax revenue up amid lingering high unemployment numbers.

More immediately, there’s the possibility of a return to mandatory business shutdowns — something Gov. Steve Sisolak has warned could happen if covid case numbers don’t improve over the next two weeks.

White told the forum that other tourism hubs are not maintaining their industry through the pandemic-caused downturn as well as Nevada. He called that a testament to the resiliency and diversified tourism climate. 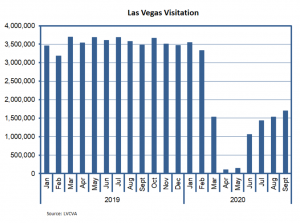 “The area should be well positioned to resume more quickly once we can get to the other side of this,” added White. “The offset is that it will take quite a bit of time to return to normal.”

Air travel is not expected to return quickly, which has a major impact on revenue because air travelers (especially international ones) spend significantly more than tourists who drive in. Similarly, large events like concerts and conventions are also expected to be slow to return. Conventions are major drivers of revenue, specifically they keep things busy midweek.

But Virginia Valentine of the Nevada Resorts Association stressed that Las Vegas has “always recovered.” She pointed to 9/11, saying people adjusted to new norms (like having to take your shoes off at airport security) after initially feeling like they would never fly again. 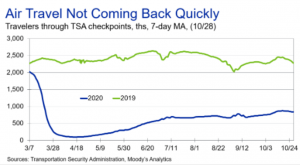 She also emphasized that Nevada offers one-of-a-kind experiences that cannot be virtualized or replicated elsewhere. Watching a live-stream of an artist performing on YouTube is not the same as being lost in a sea of people at a music festival like Electric Daisy Carnival, for example.

“This is what brings back visitors time and time again,” added Valentine.

David Schmidt, an economist with the Nevada Department of Employment, Training and Rehabilitation, echoed that sentiment. He pointed to promising traffic counts from I-15 at Primm and Hwy-50 at South Tahoe. Since Labor Day, both locations have seen steady increases in traffic compared to the same date the previous year, which he sees as a sign that visitors are still willing and eager to come.

“It’s not the Vegas brand,” he said. “It’s getting there. That’s quicker to get over than if the inverse were true.”

All Las Vegas Strip properties have reopened after closing in March, but some are currently operating only on weekends due to reduced demand. Three off-Strip casinos — Rio, Palms and Hard Rock (soon to be Virgin Hotel) — are still closed.

Sales tax plays an outsized role in state revenue, and economists agreed that additional federal stimulus is needed to keep that revenue at sustainable levels.

The $1,200 stimulus checks, $600 in expanded unemployment benefits and the Pandemic Unemployment Assistance program for gig workers that came as a part of the coronavirus relief funding package passed earlier this year infused millions of dollars into the state economy.

Moody’s projections assume an additional stimulus package will be passed by Congress within the first three months of 2021. They assumed a $1.5 trillion package — a compromise of the proposals that were being pushed by Republicans and Democrats before negotiations stalled over politics. There is no guarantee any deal will be reached, but White said additional stimulus was the only tool left at the federal level.

The Economic Forum received forecasts from Moody’s Analytics, the fiscal analysis division of the Legislative Counsel Bureau, the Governor’s Finance Office, the Nevada Gaming Control Board, and the Department of Employment, Training and Rehabilitation. The five-member panel will use the information to create and approve the official state budget forecast to be used by Gov. Steve Sisolak and the Legislature.

Sisolak has already warned state agencies to prepare for reductions. His office last week announced that state agencies have been asked to prepare budget “reserves” of 12 percent a year for the 2021-23 biennium.

The Economic Forum is scheduled to meet again on Dec. 3 to finalize their projections.