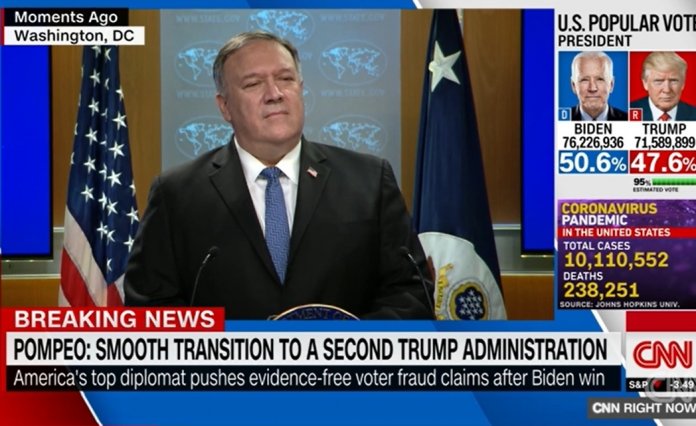 As if there weren’t enough clowns trying to nullify the decision of Nevada voters who preferred Joe Biden over Donald Trump by nearly 37,000 (and counting) votes, now the United States Secretary of State has joined the circus.

“There will be a smooth transition to a second Trump administration,” Mike Pompeo said Tuesday.

It’s one thing when some minor rando Fox News celebrity wannabe like Adam Laxalt lobs poisonous, evidence-free allegations in concert with reality’s Denier in Chief, Donald Trump. It’s bad enough that Laxalt is deliberately contriving bogus complaints to discredit and undermine election results in the state he purports to be from, in a clear and blatant attack on democracy and the people of Nevada.

Laxalt and the other self-aggrandizing right-wing performance artists who routinely but baselessly deny Nevada’s election results can be lumped in with the brainiacs who scheduled the Trump campaign Philadelphia press conference at Four Seasons Total Landscaping. Sure, Nevada would be better off if Laxalt was no longer in it. But the whole Trump-Laxalt show in Nevada has an air of buffoonery, in a tragedy-meets-farce sort of way.

But when the United States Secretary of State joins the effort to deny election results, and suggests Trump will be installed as Dear Leader no matter what the official vote count is in states across the country, it’s chilling.

Or it would be. Except remember, it’s Mike Pompeo.

For years Pompeo was a garden-variety Tea Party plodder in the House of Representatives, and sort of a back-bencher one at that. Enthralled by the intellectual clarity of Sarah Palin, Pompeo and his colleagues vowed to defend what they imagined the Constitution to be every day and repealed the Affordable Care Act every other week.

Come to think of it, remember Jim Gibbons? Nevada’s horrible albeit tremendously entertaining governor during the last years of this century’s first decade? Before he was a gubernatorial floor show Gibbons, like Pompeo, was in the House and a stalwart champion of whatever right-wing rubbish was fashionable on Rush Limbaugh’s radio broadcast on any given weekday.

It has crossed my mind more than once that if timing had been just a little bit different, Gibbons would have had a cabinet position in the Trump administration. Maybe even Secretary of State. Not Trump’s first Secretary of State. Trump was doing that whole “only the best people” hilarity so he still probably would have started with Exxon poohbah and Very Important Person Rex Tillerson.

But as was the case throughout Trump’s presidency, the cabinet was a quickly revolving door, and anyone who indicated even the slightest disagreement with the Great Man got the boot, until Trump found someone who would do whatever he said. Like defecate on U.S. institutions and values for the sake of giving Trump something to whoop about while watching TV all day.

Gibbons could have done that. Alas, timing.

Now we get Laxalt doing that, every day.

And it’s what Pompeo did Tuesday.

The silver lining in all this: The nation’s most important allies have shown more regard for democracy in America than Pompeo has, and have acknowledged Biden as president-elect. They know the entirety of Trump’s “administration” is a chintzy collection of carnies and trash. They know Pompeo is no Jefferson or Madison (both former Secretaries of State). He is no Cordell Hull, John Foster Dulles, George Schultz or Madeleine Albright.

James Baker could be a snake, and Henry Kissinger was monstrous.

But nobody ever accused either of them of being a dullard.

Which brings us back to Pompeo.

Trump tapped Pompeo to replace Tillerson at State in 2018, at roughly the same time Vladimir Putin had just “won” a genuinely rigged reelection. Trump, ever the subservient suck-up to Putin the alpha male, congratulated his idol for so craftily suppressing all opposition, er, winning reelection. And the Kremlin issued a statement expressing delight that Pompeo would replace Tillerson. Russia already totally had Pompeo’s number because they’d been running circles around him when he was CIA director.

Now Pompeo and Trump (and Laxalt) are, however unwittingly, continuing to implement a top Russian foreign policy priority: Keep the U.S. citizenry at each other’s necks while eroding trust in U.S. institutions. No wonder Putin was pleased Pompeo would be Secretary of State.

Easily and by far the most impressive achievement of Pompeo’s tenure as Secretary of State is that once in the New Yorker he was called “a heat-sinking missile for Trump’s ass” (a phrase which also aptly describes Laxalt).

Pompeo Tuesday showed he is a diplomatic oaf, possibly a traitor, and yet another sick joke of the sort that has infested Trump’s “administration” from before it even started.

As more than a few folks have cautioned, a shockingly large portion of the  U.S. population has shown itself receptive to authoritarianism. We might have gotten off easy this time, because next time the authoritarian might be competent.

At least the current batch is on its way out. To hear a U.S. Secretary of State say what Pompeo said Tuesday was stomach-turning, and again, chilling. But on the bright side, where I’m always looking, Pompeo, like Trump, is a clown.

CCSD to school: Spend money we haven’t given you yet, and...