City proposes crackdown on saturation of vacation rentals in neighborhoods

Real estate agent Cindy Lowman says “even with COVID” her short-term vacation rental (STVR) in Henderson is grossing $15,000 a month. “October was a bit slower, but November is back up there,” she said via email.  “This is WITHOUT sports, conventions, shows, etc.”

Lowman says revenue will “go up quite a bit when those come back. I have my house set up for convention people with lots of beds since workmates usually don’t like to sleep together so I have 11 beds if they want to sleep alone.”

“We have tons of people that come to Nevada that need short term housing for full-time living,” Lowman says, adding she deals with “insurance companies needing to home people that have damage to their homes, corporate people here for a short while, people buying new builds and that need a place for a few months in between selling one and waiting for the other one to be done.”

She also has “people here to vacation – some for four days, some for more.”

Henderson, until recently, was the only city in Southern Nevada to allow visitors to take over entire homes in residential neighborhoods for days or weeks at a time.  Last month, North Las Vegas approved STVRs and imposed a $900 licensing fee, a little more than Henderson’s fee of $820 a year.

Henderson began regulating STVRs last year. This year through August the city imposed and collected $6,100 in fines on properties where owners or renters violated the rules, according to spokeswoman Kathleen Richards. But critics contend licensing fees and penalties are simply insufficient to regulate the rentals, which generate numerous complaints from neighbors.

“Your actions have transformed my residential neighborhood into a motel strip,” resident Elizabeth Brickfield wrote in public comment to the council in September. She says there are four vacation rentals within 200 feet of her house.

On Tuesday, the Henderson City Council intends to vote on proposed amendments to its 2019 ordinance allowing STVRs. Residents complain the city-sanctioned mini-hotels are taking over their neighborhoods and trampling their right to quiet enjoyment of their homes.

Lowman says a group of STVR proponents is threatening to sue the city “if they don’t have reasonable rules that don’t infringe on our constitutional rights… We know we can’t have everything our way and don’t expect or ask that.”

“All of my clients are paying over market value for these homes,” Lowman told the City Council in September, imploring members not to place distance and other restrictions on STVRs.

“It’s good for sellers,” Lowman told the Current, adding investors “are willing to pay above market value (by a good $10,000+) knowing they will make it back easily in the first month they rent it. STR(s) can bring in a lot of money if you run them correctly and have them set up right.  With the distance rule, this will stop happening and values will not keep going up.”

“Local government has the clear legal authority to regulate and impose restrictions on land use and real property within its jurisdiction,” Henderson spokeswoman Kathleen Richards said of the city’s legal rights. “Examples of this include zoning, building and property maintenance codes. Additionally, as with any type of license, a licensee must adhere to the regulatory requirements in order to be granted the privilege of obtaining that license.”

In one neighborhood near Eastern and Robindale, which has no homeowners association prohibiting the rentals, more than 20 homes are licensed as STVRs and others operate illegally. 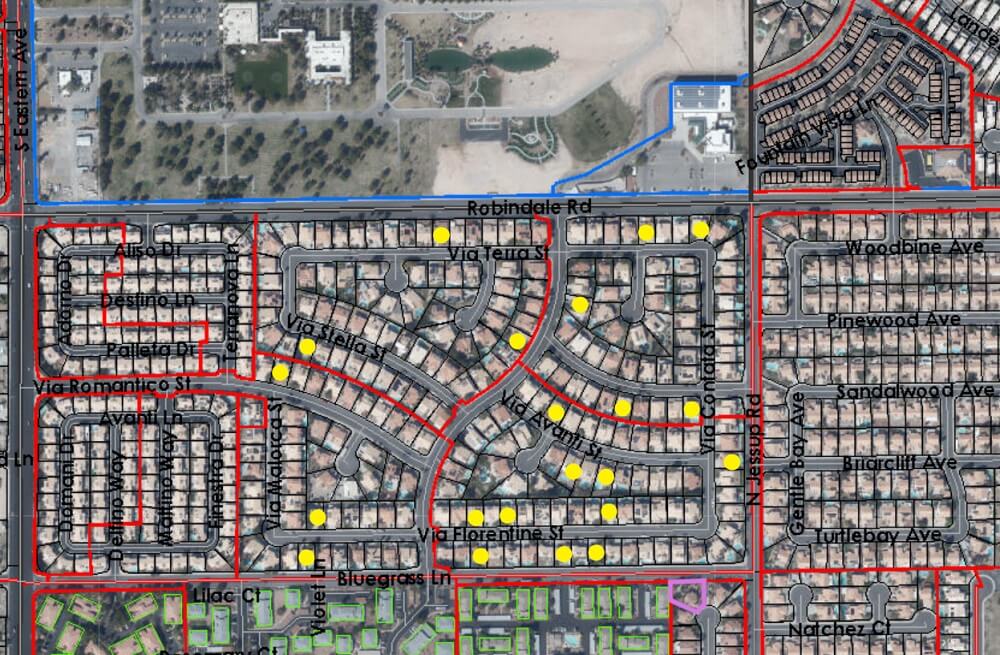 Yellow dots indicate a smattering of short-term vacation rentals throughout a neighborhood near Robindale and Eastern, where homeowners say they frequently complain to the City of Henderson about alleged violations of noise and occupancy standards.

As eviction moratoriums expire, some fear landlords will unload their properties, only to have them snatched up by STVR investors.

The New York Times reported popular cities in Europe, reacting to the increase in housing prices attributed to vacation rentals, are using the opportunity created by COVID to convert vacant units from short-term rentals to long-term leases.

Of the 280 licensed STVRs in Henderson, the Current’s analysis of public records reveals:

Recommendations from city staff include:

Proposed changes to enforcement include:

The new rules would apply to current and future registered STVRs. Existing registered STVRs would be grandfathered in and not subject to the distance requirement until the registration is terminated or the property changes ownership.  At that point, properties in violation of the separation requirement may not be eligible to register again.

'Everything is on the table' should gaming regulators… by Dana Gentry November 18, 2021
Little housing stock, high rents in Nevada create a homeless… by Michael Lyle October 11, 2021
Trump-endorsed candidates snubbed & drubbed at NVGOP… by Hugh Jackson May 4, 2022