In November’s election Nevada voters narrowly rejected Question 1. The legislatively referred constitutional amendment proposed to change the Board of Regents of the University of Nevada from a constitutional to a statutory body in order to more effectively facilitate legislative oversight of higher education.

As a consequence, Nevada’s land-grant institution will continue to be governed by elected regents whose only qualification is being eligible to vote in the state. No doubt, the regents, with the assistance of their publicly-funded lobbying machine, will continue to fight any legislative efforts to increase accountability.

Question 1’s outcome showed significant regional variation in support and opposition. As the data in the table below details, in Washoe County and the rural counties Question 1 lost by a total of nearly 115,000 votes. In Clark County support exceeded opposition by more than 110,000 votes.  Also note the rolloff column, summarizing the share of voters who chose to skip the measure altogether, presumably because of its opaqueness. 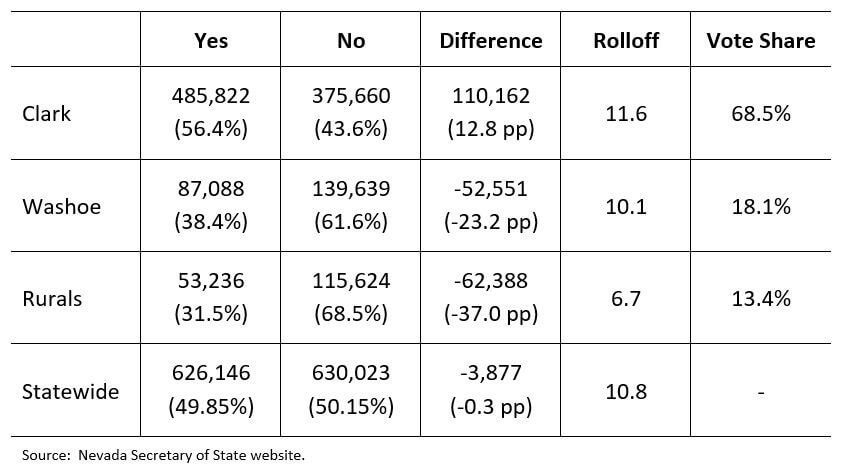 Precinct-level analysis finds that in Washoe and the rurals there was not a single jurisdiction, be it a township or state assembly, state senate, or regent district, where yes received a majority of the vote. In contrast, support for Question 1 in Clark was robust and widespread. For example, the figure below indicates that Question 1 received majority support in every regent district in Clark. Moreover, in the Clark districts where regent elections were on the ballot, yes on Question 1 received more votes than the winning candidates. Not surprisingly, the margin was largest in regent-district three (nearly 13,000 votes or 30 percent greater support for yes than for the winner, Byron Brooks) that is being vacated by scandal–plagued regent Kevin Page. 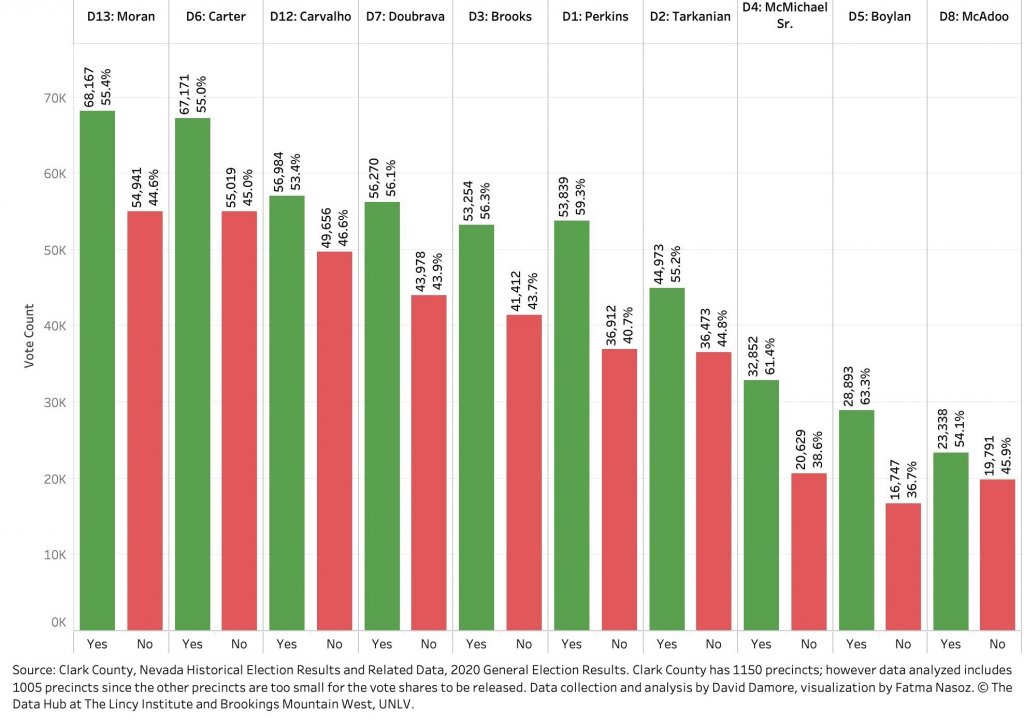 Given such sharp geographic differences of opinion regarding the regents’ effectiveness, we encourage the legislature to pursue reforms that would give each of the state’s regions the higher education governance it clearly prefers based upon the Question 1 vote.

Currently, NRS 396.010 establishes the state’s land-grant institution in the office of the chancellor. The statutory language extends the land grant and the regents’ constitutional authority to all components of Nevada System of Higher Education (NSHE). However, as it did in 1957, 1964, 1969, 1981, 1993, and 2005, the legislature can redefine the colleges and universities that are within and outside the land grant. Campuses in the former group would continue to be governed by the regents, while those in the latter group would be given their own governing boards.

For UNLV and UNR, such a reform would be win-win. Excluding UNLV from the land grant, would mean that the school would no longer have to contend with regents from the opposite end of the state undermining its presidents and initiatives. Instead, UNLV could be governed by a board composed of representatives from local governments, the faculty, and the student body, as well as by appointees drawn from the region’s business and philanthropic communities who meet minimal requirements such as holding a college degree. No longer would the UNLV president have to sit through two-day regents meetings and endure hours of happy talk, reports, updates, and other tedious minutiae delivered ad nauseam by non-expert, system-level bureaucrats. Rather, the president would report directly to those who have the greatest stake and interest in UNLV’s success.

As part of these reforms, Clark County would withdraw from cooperative extension and the legislature would redirect the associated tax revenues to create a Clark County partnership program between the county and the region’s non-land-grant institutions, including UNLV, CSN, and NSC. Imagine if instead of fighting with the UNR-administered cooperative extension to develop programming that actually supports the region’s needs, the Clark County Commission could direct the funds to new and existing initiatives such as the UNLV School of Medicine or urban horticulture enterprises that buoy the region’s immense food and beverage sector?

This reform would benefit UNR by providing the campus the status it once had, that of the state’s solitary land-grant institution. Indeed, even though UNR has not legally held this status since 1981, this has not stopped its advocates from claiming otherwise.

Take for instance when then Governor and now UNR President Brian Sandoval vetoed AB 407 (2017). The bill, which was carried by former assemblywomen Olivia Diaz and passed both chambers with super-majority support, proposed to reduce the scope of the state’s land-grant to include only the three university-tiered institutions within NSHE: UNLV, UNR, and DRI.

However, in his veto message, Sandoval erroneously claimed that UNR “. . . has been the only ‘land grant’ university [sic] in the State.” Continuing, Sandoval asserted that “[T]here is no question that UNR is the land grant institution [sic] contemplated by the Nevada Constitution” even though NRS assigns the land grant to the entire system.

If you don’t believe us or cannot make heads or tails of the NRS language, take a look, for example, at the NSHE audit reports. The introduction to these documents note that NSHE “is a state-supported, land grant institution [sic] established by the Nevada State Constitution of 1864” that is comprised of nine separate institutions including UNR, UNLV, and even the system administrative office. Opponents of AB 407, many lacking this basic understanding, celebrated Sandoval’s veto as a “narrow escape” from having to share the state’s land-grant with the likes of UNLV.

The fact of the matter is even though NRS has included UNLV in the state’s land grant for decades, the regents have allowed UNR to claim all of the land grant’s supposedly collective assets. For instance, UNR maintains exclusive control over cooperative extension even though UNLV clearly is better positioned to administer these programs in Southern Nevada. The regents greenlighted UNR’s controversial sale of the college farm to fund projects exclusively on its Reno campus even though the college farm belongs to all NSHE institutions and its sale proceeds should have been divided accordingly. Multiple chancellors have refused to affirm UNLV’s land grant status to better position the school to secure federal grants that are available only for institutions with land-grant status. The end result is that UNLV has all of the downsides of being in the state’s land grant, including being governed by an archaic structure that is not well regarded in Southern Nevada, while receiving none of the land grant’s resource benefits.

In 2021, the legislature can give UNLV its freedom without running afoul of the state’s constitution, while also realizing Sandoval’s vision for UNR. Implementing these reforms, of course, would mean that UNR would be governed by a board composed overwhelmingly by regents elected from districts in Southern Nevada. Perhaps those who were so quick to oppose Question 1 should have contemplated such an arrangement instead of voting to maintain a higher education governing structure that was created when Nevada had fewer than 7,000 residents and present-day Clark County was part of the Arizona Territory.

David Damore is Professor and Chair, Political Science, at UNLV.