Not an L, not a V, not a Nike swoosh: Nevada’s K-shaped recovery

The complex Nevada economic recovery from the COVID-19 pandemic and recession can be explained by one letter of the alphabet – the letter K. The “K-shaped recovery” describes how white-collar jobs are able to prosper during the COVID-19 pandemic, while blue-collar workers are forced out of the labor market or subjected to unsafe working conditions for minimal compensation. Those on the upper half of a K distribution recover at a much quicker pace than those on the lower half. According to the U.S. Chamber of Commerce, sectors on the upper half of the K include technology, retail, and software services; sectors on the lower half include hospitality, travel, and food services. 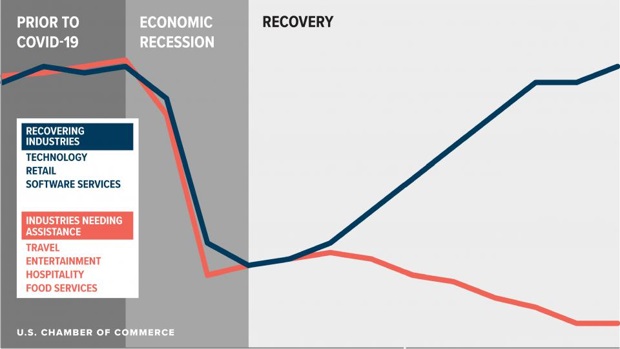 Anyone familiar with Nevada’s regional economies can see parallels between Nevada’s workforce concentration and the K distribution. In recent years, Northern Nevada has become a satellite Silicon Valley of sorts, bringing a tech presence to the valley. Employees can perform these jobs from home, and market demand for them remains high despite the pandemic. Meanwhile, Southern Nevada is the global epicenter of the leisure and hospitality industry. Employees in this sector are dependent upon face-to-face exchange with customers and have faced significant hardship and uncertainty during the pandemic, while receiving little to no compensation.

The data bear out a Nevadan K-shaped recovery, with a drastic chasm in unemployment rates between Reno and Las Vegas. In March, at the beginning of the pandemic, the unemployment rate in Las Vegas was only 1.7 percent above that of Reno, but by April the difference exploded, with unemployment in Las Vegas ballooning to 34.2 percent — a 13.7 percent larger unemployment rate than Reno in the same period. Since June, the difference has stabilized, with Las Vegas unemployment resting about 8 percent higher than that of Reno. These percentages, however, still obscure part of the story. Due to Las Vegas’s much larger population, there are many more people unemployed there. As of October, there were 111,600 more people unemployed than the same point in the prior year; this equates to four in ten workers within the entire hospitality industry being unemployed. Compare this to 15,000 more people unemployed than the same time last year for Reno; roughly the amount of employees at Caesars Palace. The northern half of the state is well on its way to recovery, buttressed by a pre-pandemic investment of two-third’s of state economic development assets in that region, while Southern Nevada struggles to regain its economic footing and restore its economy.

The economic diversification of Reno and parts of Northern Nevada required the investment of revenue generated by the Southern Nevada workforce, and the transfer of those subsequent assets out of the most populous and diverse region in the state. In Reno, Renown Regional Medical Center is one of the largest employers in the city, providing the most secure employment during the COVID-19 pandemic. Moreover, the tech industry is staking a claim in areas outside the city, driving hundreds of thousands of Reno-Sparks citizens to the east side outskirts every day. The tech boom began with Amazon setting up in North Valleys in 2015, but since then has expanded. Tesla Gigafactory broke ground in 2016 out on USA Parkway and the requirement that Switch Communications build a facility in northern Nevada in order to receive tax credits in Southern Nevada added another employer. Apple located its data center off of I-80 in 2019. These centers brought with them a wealth of IT-related jobs that, during the current pandemic, can be done from home. With a newfound volume of sustainable jobs in Northern Nevada, it is no surprise that employees there have landed on the upper half of the K distribution.

The Southern Nevada economy, stripped of its wealth by questionable economic development decisions, leaves Las Vegas with its primary economic engine – the Las Vegas Strip. Recent investments, including the new Circa casino in Downtown Las Vegas, Resorts World, and the Drew, bolster the hospitality sector’s centrality to the city. The valley’s unique tourism-based economy is subject to the highs and lows of an economic crisis, and the COVID-19 pandemic is the latest example. As pocketbooks become slimmer and slimmer across the nation, people look for indulgences to eliminate, and frequently, a leisure trip to Vegas is the first to go. Add that to the fear of travel and congregation that a deadly pandemic fosters and it creates a toxic situation for the Las Vegas hospitality sector. It is no surprise, then, that the Las Vegas unemployment rate is one of the highest in the nation. As long as the COVID-19 pandemic continues, the economy of Southern Nevada will remain confined to the lower arm of the K. Further, as long as tax incentives generated by Southern Nevada’s core industry are viewed as a state-wide asset, Las Vegas will be left vulnerable in future recessions.

In retrospect Nevada leaders should have addressed regional inequality and equitable economic diversification in Southern Nevada years ago. Future federal funding should be allocated in a fair and equitable manner. And Nevada, as a state whose politics and Electoral College votes remain competitive, should expand its ability to secure a fair share of federal support for all its residents. The incoming Biden administration should have ample motivation to help Nevada receive the funding it deserves in the face of the greatest public health and economic crisis of our time.

Not an L, not a V, not a Nike swoosh: Nevada’s K-shaped recovery

Katie Gilbertson is a researcher working at Brookings Mountain West and the Lincy Institute at UNLV.

Eshaan Vakil is a researcher working at Brookings Mountain West and the Lincy Institute at UNLV.

How despite losing multiple rulings, Station keeps fending… by Clara Bates July 14, 2021
Race for lieutenant governor features primaries on both… by Jeniffer Solis May 16, 2022
Adam Laxalt, Trumpism and the Big Lie: A chronology by April Corbin Girnus November 8, 2021