Note: Each writer on the Nevada Current staff was asked to highlight some of their work  from this atrocious year, and say whatever they wanted to say about it.

It should surprise no one that marginalized communities were hit the hardest in the pandemic. People of color, immigrant communities and the LGBTQ community have been disproportionately impacted by the economic suffering brought on by Covid and subsequent shutdowns. Honestly, there is so much more reporting I wish I could have done to show how these communities are trying to survive.

During my time at the Current, I’ve worked hard to report on Nevada’s housing and homeless crisis. My goal has always been to help people understand the policies at play but more importantly show those people who are affected by policy decisions. I would hope my coverage of the homeless encampment, which was destroyed days after Thanksgiving, is an example of that effort. I was there the morning it was raided. Residents of homeless encampment displaced after early morning raid. I was there for the aftermath days later. Local governments taken to task for razing encampment.

It was a quick write up, but the behind the scenes story of stumbling upon this action is a fun one. I was just going on an evening walk through UNLV’s campus to clear my head, and I happened to notice a lot of commotion by the Hey Reb! statue. I asked the people surrounding it what was happening and if they were removing it. Silence. No response. No one would answer me. Their already panicked looks intensified when I said those fateful words: “I’m a reporter.”

The removal of Hey Reb!, I take it, was supposed to happen quickly with nobody watching. But alas, I stayed. I watched. I wrote.

I am writing this as my 16-month-old naps and my 5-year-old plays on an iPad. I disclose this because, admittedly, I will use any excuse to mention my children, but also because frantically working during naptime or as Power Rangers plays for hours in the background is now a familiar experience for so many working parents.

The past year has stretched and strained families. In August, I wrote that with childcare and education strained, burden on working women deepens. That statement is as true today as it was in August, in March, in 2019, in 2009, etc. A lot of people wrote (or aired) stories this year about how working parents were juggling their jobs and their children’s remote learning. Most of them ignored the big picture: These burdens are the results of policy decisions.

They also reflect an economy that was broken long before this current recession hit.

This belief frames much of our coverage at the Current, and I’m particularly proud of the reporting we’ve done this year on Nevada’s economic outlook. Was it a surprise that an extra $600 per week in expanded unemployment benefits resulted in some people receiving more while unemployed than they did in their pre-corona jobs? Not if you read our coverage. We have been pointing out Nevada’s lagging wage growth since before it was cool.

One final thought on this topic: Nevada billionaires got even richer this year.

The baby is still napping, so here are three more reporting highlights: In May, I hurt the Department of Employment, Training and Rehabilitation’s feelings by writing something that was true. In June, I wrote about a charter school breaking ties with its education management organization, a side of the industry that rarely gets talked about. In October, I uncovered a website for a fake Democratic chamber of commerce.

Privilege slapped me in the face in 2020. I’m writing this in my warm, holiday-decorated home (which increased in value amid economic despair), where I’ve been fortunate to spend the year since the Current staff bid adieu to our office in March. While I miss my colleagues, my attention-deficit disorder is triggered less by sleeping cats and dogs than compelling conversation.

If not for the loss of life, economic devastation, and inability to gather worry-free with friends and family, I’d be happy as a clam.

One of the few times I ventured out was to a news conference held by the mother of Jorge Gomez. He’s the young man who was gunned down by Metro police during a Black Lives Matter protest in downtown Las Vegas.

Gomez, unlike other protesters, was openly carrying weapons. It’s legal in Nevada, but police admit they receive no special training on encountering a person carrying guns.

The other times I left home (other than to pick up goods in the parking lots of my favorite stores) was to attend Gov. Steve Sisolak’s news conferences. You’ve got to bet he didn’t bargain for a pandemic in his second year in office. Where do you set the bar for governing in uncharted waters? Hard to say.

I spent much of the year requesting and eventually reading the COVID-related communications of the Sisolak administration during the first three months of the year, as the coronavirus made its way to America’s shores and into our lives. There’s no mention in the missives of beefing up the state’s capacity to process unemployment. Nothing on protecting those in congregate care or the incarcerated.

The governor did take notice when the state raided the accounts of prisoners who owe restitution to victims. The money, usually deposited by financially-struggling families, covers necessities and “luxuries” such as coffee. A few weeks later, Sisolak told the state to back off.

Like many of you, I was shocked when Clark County School Superintendent Jesus Jara said in November that eleven students had committed suicide this school year. Spoiler alert — youth suicide was a just as much of a problem in Nevada long before COVID.

Had some fun in May when we exposed plans by then-Las Vegas Mayor Pro Tem Michele Fiore to renovate Floyd Lamb State Park, and benefit friends and family in the process.  There was even a test wedding for a special friend in Fiore’s brainchild, a new events center in the pastoral park. Fiore has since stepped down as Mayor Pro Tem. Nothing to do with the park. Just her mouth.

I haven’t been to the Nevada Current office in 10 months. Part of the reason is because of the pandemic but part of the reason is also because I misplaced my office keys and can’t get in. Goodbye polvo de sal y limon candy, goodbye tiny replica of the USS Enterprise, goodbye Kurt Vonnegut finger puppet and refrigerator magnet. Until next year.

It’s difficult to look back at these months. When reports of COVID first sprang up on the other side of the world it felt so far away. Now it’s not so far away anymore. Here at the Current, from the start we focused our reporting on how marginalized communities were already being failed by social safety nets.

In April, we wrote about how permanent residents who filed a joint tax return with an undocumented spouse were excluded from stimulus checks, quickly leaving mixed-status households, like Donis Hernandez’s, worse off than other families. Undocumented immigrants, like Eva, got even less.

Nevada tribes faced theft, vandalism, and rising COVID-19 cases while waiting on slow “agonizingly bureaucratic” federal aid at the start of the pandemic. Thank you to those who trusted me to share some of these stories.

Black Lives Matter protests across Nevada opened up conversations and criticism about schools feeding a school to prison pipeline. And those concerns are backed up by years of data revealing large racial disparities in school policing, including how Black students accounted for about 43 percent of police referrals in Clark County while representing about 14 percent of the student body.

Disclosure: When I asked Michael, April, Dana and Jen to highlight some of their 2020 stories, I was being selfish. As I discovered when we did this last year, I get a kick out of reading how they describe their work, for a lot of reasons.

As for my stuff…

Like the Great Recession did a decade ago, the pandemic once again laid bare Nevada’s political, ideological, and structural inability to confront a crisis. If somehow the new new normal is better than the old new normal — now a nearly unimaginable scenario —  it will be despite Nevada’s institutions and systems, not because of them. So I wrote a fair amount about that, including:

Columnists have a time-honored obligation, when coming upon a barrel with a fish in it, to shoot the fish. Which is to say I also wrote some pieces about the likes of Carolyn Goodman, Dan Rodimer, Michelle Fiore, and Adam Laxalt.

By the way, the overwhelming majority of my commentary on Nevada news isn’t published in the Nevada Current proper, but six days a week in the Daily Current newsletter, which is free. 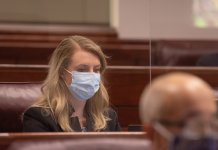 A wretched year: The Nevada Current’s staff looks back on 2020