The concept seemed tailor-made for the pandemic: give out-of-work caterers and cooks who lack the capital required for a brick and mortar eatery a place to earn some money by connecting with consumers in search of take-out meals.

The proposed location for the food truck conglomerate, modeled after trendy “food pods” in Portland, San Francisco and San Diego, also seemed made to order — a vacant lot in the midst of downtown Las Vegas’ Arts District, surrounded by offices and homes.

Property manager Paul Murad, who represented Main Street Investments II, LLC, the lot’s owner before the city’s Planning Commission, says the benefits to Las Vegas are many, including “hundreds of business licensing applications and fees” for the revenue-starved local government.

Against the recommendation of city staff, which balked at the absence of restrooms on the lot, the Las Vegas Planning Commission approved the project in December, literally paving the way for the trucks.

But a rare move by Councilwoman Olivia Diaz will bring the proposal before the City Council next week.

“So much for wanting to help economic recovery with actions not words at the City of Las Vegas,” says Murad, who alleges Diaz is discriminating against individuals who lack the capital for a restaurant.

Diaz declined to say why she took the relatively unusual step of placing the item on the City Council agenda, absent an appeal from opponents.

“It’s my understanding that this issue you reference stirred up a lot of frustration by other downtown businesses,” Diaz’ political consultant Kami Dempsey-Goudie told the Current via email. “It would be a food truck lot which would be on the desert and rocks, no access to bathrooms, no sitting areas, etc.“

“People are not congregating,” says Murad, alleviating the need for bathrooms. He says facilities have been secured in a nearby building for staff. Murad says “portable, upscale bathrooms for events” would be added, as needed.

The ground would be covered with “poly pavement,” a substance Murad says is stronger and less costly than pavement, and the lot would be surrounded by a chain link fence to “secure the site from vagrants and vandalism,” he says.

Dan Lovell, whose Empire Law Group is next to the proposed project, says the vacant lot “is currently an eyesore…” and says he supports the plan, which calls for 10 trucks on site at a time. The frequency of the food pod events has yet to be determined.

Murad says the proposal is not a permanent fix for the lot, which he says is best developed as a mixed-use commercial/residential project. If the food pods catch on, they’ll likely move to another location, he says.

“It seems that at a time when everyone is investing in the area and trying to lift the bar when it comes to beautification and quality, the proponent of this matter did not plan to invest at all,” says Dempsey-Goudie. She says Diaz intends to meet with the applicant Wednesday to discuss the opposition.

Murad dismissed a handful of nearly identical messages of opposition sent to the city as “cut and paste,” suggesting they were generated by nearby restaurants that are suffering from occupancy restrictions imposed by Gov. Steve Sisolak to stem the spread of COVID-19. With restaurants limited to 25 percent of capacity, take-out and delivery orders have become indispensable to some operators.

Dozens of Las Vegas restaurants have closed since the onset of the pandemic last March, according to Eater, a publication for food enthusiasts.

”As brick-and-mortar restaurants scrambled to devise sustainable to-go plans in the wake of the order to close the state’s dining rooms, food carts were able to keep doing what they had always done: serve takeout, pivot when necessary, and get creative in a pinch,” reports Eater‘s Portland publication.

Murad says the concept allows customers to purchase a variety of foods without leaving the area. Like Portland’s food pods, the Las Vegas collective could become a tourist destination.

“In the post-COVID world, of course,” he says. 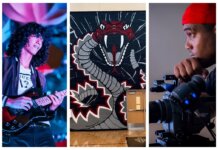