The same day the state announced Nevadans aged 65 to 69 will have their chance to get vaccinations beginning next week, one vaccine maker’s delivery to the state was delayed due to winter weather and the state confirmed it is working toward a statewide appointment system to increase cooperation and decrease confusion.

Nevadans aged 65 to 69 anxiously awaiting their opportunity for a coronavirus vaccination will have their chance beginning next week as eligibility requirements widen at participating Nevada pharmacies, Gov. Steve Sisolak announced Wednesday.

Since then, University Medical Center of Southern Nevada has confirmed it, too, and will offer appointments for that age group at its Encore Las Vegas vaccination site. And walk-in appointments have been expanded this weekend at Cashman Center and Desert Pines High School to accommodate the newly eligible seniors.

Though some smaller Nevada counties had already begun vaccinating that population based on vaccine availability, Sisolak said all Nevada counties will now be able to do so and credited the increased vaccine allocations to pharmacies participating through the Federal Retail Pharmacy Program.

The eligible pharmacies will begin appointment scheduling next week after dose shipments arrive, and the state aims to expand appointment availability for the 65 and older population to all vaccination sites statewide by March 1, he added. Interested members of the public should visit NVcovidfighter.org and, in Clark County, the Southern Nevada Health District’s vaccine distribution website for additional information.

The state’s announcement Wednesday came just hours after the Southern Nevada Health District announced its weekly shipment of Moderna vaccination doses did not arrive this week due to extreme winter weather across the country, leading the agency to cancel roughly 4,000 affected second dose appointments this week and reschedule them for next week. The district will offer only second dose appointments next week as it seeks to catch up.

The federal government, states/territories and 21 pharmacy retailers are working together to increase vaccination access through the Federal Retail Pharmacy Program. As a result of the effort, the U.S. government provides participating pharmacies in each state with vaccination supplies separate from the limited supply allocated specifically to the states.

Nevada is one of 22 states or territories in which only one initial retailer has been identified. In the Silver State, it’s Walmart.

The retail giant began vaccination appointments for members of the general public ages 70 and older on Friday in Nevada after technical updates caused the company to temporarily take its booking website offline.

The state said Wednesday that it will use its bridge program to expand vaccine availability for individuals 65 years old and older beyond just Walmart, however, working with other pharmacies to provide them with supply to participate in the expansion next week.

The pharmacy participation is one of the most notable examples of states and the federal government soliciting private industry assistance during the vaccination rollout, though some novel arrangements are gaining increased attention.

In Washington, companies including Microsoft and Starbucks have joined a coordination effort to pool resources and expedite the process of vaccinating the state’s residents. In North Carolina, a collaboration between three companies led to a mass vaccination clinic at an NFL stadium.

Neither the Southern Nevada Health District nor the state have announced similar private-public efficiency efforts aimed at the vaccination rollout, though they have joined with pharmacies for various programs including senior vaccinations and to reach individuals in care homes. The health district confirmed Wednesday that the state Department of Health and Human Services is working to develop a statewide scheduling system in conjunction with a private company as well.

The governor’s office did not respond to a question Wednesday about its private partnership efforts.

The Nevada COVID-19 Response, Relief and Recovery Task Force, announced by Gov. Sisolak in March as a way of mobilizing the business community in the coronavirus fight, has largely stepped back as the focus has shifted to vaccination distribution, despite taking an active role in procurement of tests and personal protective equipment, promotion of a COVID-19 contact tracing app and efforts to ensure Internet access for students learning from home.

Catherine Cole, vice president of the advertising and public relations firm R&R Partners in Las Vegas which has performed work for the state earlier in the pandemic, said the group is awaiting word from the governor on any potential role it could play in vaccination efforts.

“We haven’t yet been engaged in that effort, but anticipate that will occur. We will almost certainly assist with encouraging vaccine use among the population who is hesitant, but that is an effort to undertake once the supply and distribution efforts are more solidified,” she said via email.

Task force member Alex Dixon, president of the Western Region for laundry and linen services company PureStar, said the group is in “constant communication” with the governor’s office but that the priority now is securing sufficient vaccination supplies.

Nationally, the number of COVID-19 vaccines being administered daily has risen steadily since Biden took office.

The administration also boosted the number of doses headed to states, announcing Tuesday that the weekly allocation will be 13.5 million doses, up from 11 million.

A third vaccine option may become available at the end of the month: a vaccine from Johnson & Johnson is now under review by the Food and Drug Administration. But Biden’s COVID-19 advisers caution that of the 100 million doses that J&J is expected to deliver to the U.S. by the end of June, only a few million would be available once the FDA makes its approval decision. 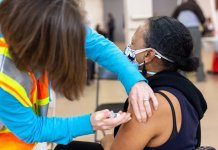 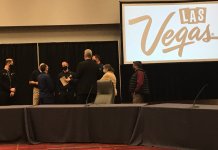