Nevada would need to double the number of psychologists and psychiatrists to be considered average by national standards.

The national average is 30 psychologists and 15.6 psychiatrists per 100,000 residents. Nevada’s rate for these behavioral health professionals is 14.5 and 9, respectively.

Translated into real numbers, all this means Nevada would need 1,074 clinical professional counselors, 474 psychologists and 202 psychiatrists immediately to be considered average in the nation. More would be needed if the population continues to grow.

Nevada’s shortage of behavioral health professionals is well documented, most recently in the 2021 Nevada Rural and Frontier Health Data Book published by the University of Nevada Reno last month. Mental Health America recently ranked Nevada 51st in the country for its prevalence of mental illness and limited access to mental-health services.

“I love my state,” said Assemblywoman Natha Anderson (D-Sparks). “I love so many parts of it, but that number is not acceptable for my friends and family and other individuals who live in our state. We have to do better.”

Nevada’s mental health needs have been exacerbated by the pandemic, which have placed record numbers of people into economic, food, educational and housing insecurity.

Anderson believes a concentrated legislative effort is now needed to address the issue of behavioral health. She is sponsoring Assembly Concurrent Resolution 5, which would create an interim committee to study and recommend policy options to address the shortage of behavioral health professionals within the state. The resolution received its first hearing in the Assembly Legislative Operations and Elections committee Thursday.

The proposed interim committee on behavioral health workforce would consist of various members appointed by legislators and state agencies like the Division of Public and Behavioral Health. It would also include a nonvoting member representing the insurance industry. Anderson acknowledged that might initially seem out of place, but she said such a representative would help the process, especially if the committee were to make legislative recommendations.

“It has to do with the questions that arise when it comes to licensing people,” she added. “The insurance industry is an incredibly important part.”

John Packham, the co-director of the Nevada Health Workforce Research Center at the University of Nevada Reno, told lawmakers the specific focus on workforce is needed.

“You can have an insurance card in your back pocket,” he said. “We can have reimbursement parity. We can see a reduction in the stigma of mental illness and getting that mental illness treated. But if we don’t have a workforce ready and able to provide those services, all of those efforts are moot.”

He added that the proposed interim committee might follow-up on policy recommendations made by the Guinn Center ahead of the 2015 Legislature to see what had an effect on the behavioral health workforce. It might also look at measures taken by Democratic Gov. Steve Sisolak over the past year as part of the string of pandemic emergency directives.

The state relaxed the licensure process over the past year and has seen steady growth in the number of licensees, according to Packham.

“This would be an opportunity to assess whether they could address (the shortage) in the long term,” he said. “Do we make those relaxations of licensure requirements permanent? If quality of care is not harmed and patient safety is maintained, maybe we need to look at that.”

Added Anderson, “We all see there’s this huge elephant in the room that we need to eat and none of us knows how to take that first bite. This is a way to start that process.”

The National Alliance on Mental Illness Nevada and the Nevada Psychiatric Association are supporting the resolution. In their letter of support, NPA noted that only 39.2% of the 194 physicians graduating from medical schools in Nevada in 2020 planned to remain in Nevada; 60.8% planned to leave.

“How can we interest young people in careers as psychiatrists?” read their letter of support. “How can we incentivize those trained physicians to stay in Nevada? What motivates these physicians to specialize in psychiatry? What can Nevada offer this workforce that no other state can?” 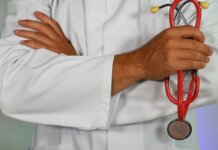 Lawmakers aim to clean up drug and alcohol rehab industry

Rehab “track records” to be public under legislation