With Nevada’s eviction moratorium and the federal protections expected to end March 31, there is rising concern and uncertainty around what happens to the hundreds of thousands of tenants at risk.

During a March 17 town hall, Clark County officials encouraged residents to apply for rental assistance before the moratorium lifts. However, the county has a backlog of close to 20,000 rental assistance applications and anticipates processing 1,700 per week.

Benjamin Challinor, the policy director for Faith in Action Nevada (previously ACTIONN), said if March 31 comes and goes without a new moratorium, the existing assistance and the pace applications are processed will be no match for Nevada’s quick eviction system.

“The rental assistance that is available or any public assistance that’s available in the community does not match the timeline of what evictions look like,” he said. “If landlords are able to start the process March 31, seven days later (renters) are gone.”

Jim Berchtold, an attorney with the Consumer Rights Project at the Legal Aid Center of Southern Nevada, said just because a renter applied for assistance does not mean the landlord won’t pursue an eviction.

“Will it technically, legally avoid the eviction? No.” Berchtold said.

For some landlords, having a tenant in line to receive money to pay a backlog of unpaid rent might be enough to dissuade them from an eviction filing.

“The fact that you have applied for rental assistance is not necessarily a defense, but I would think most landlords would want that money,” he said.

Fearing the worst, some housing and civil rights groups are hoping for another extension of the statewide moratorium.

Challinor said postponing evictions is the only way to ensure the county can work through its backlog as tenants receive the federal benefits — economic impact payments, unemployment assistance and child tax credits — authorized by the American Rescue Plan, the massive federal relief bill signed into law earlier this month.

“We hope the governor extends the moratorium at least a quarter so more folks can get through the process of either getting through their back unemployment or other assistance,” he said. “We need a little bit more time for folks to get the support they were promised.”

‘If we don’t know about it, we can’t do anything’

With no indication if there will be further federal or state intervention on evictions, local governments and housing groups are directing people to apply for rental assistance.

“If you ask for help, there are lots of things we can do. But if we don’t know about it, we can’t do anything. If you wait for the last second and the constable is at your door, that’s when it’s really tough,” said Clark County Commissioner Tick Segerblom at the March 17 town hall.

A recurring concern during the virtual town hall was the need to speed up the rental assistance applications process. Some said they’ve been waiting two months.

Kevin Schiller, the assistant county manager with Clark County, said people who applied two months ago should be getting closer to the top.

As the county works through a backlog, Schiller anticipates a flood of applications after the moratorium lifts that could further delay assistance.

With another $161 million earmarked for rental assistance, he estimated another 20,000 people could be served.

If a tenant applied for rental assistance and received an eviction notice while waiting on the application to be processed, Bechtold said they still need to respond to their landlord.

And just because a person applies for and is approved for rental assistance, he added that some landlords aren’t accepting the money.

“The tenant goes through the process, gets all their documentation, submits it to the County and the landlord says he doesn’t want to take that money,” Berchtold said.  “We don’t know of any way to force a landlord to take that money, but you can potentially raise it as a defense in your eviction case. You can say, ‘I went through the process and was approved for money. I was ready, with the County, to pay everything that the landlord owed and the landlord didn’t want to take it.’”

Buying a week or two

All tenants, Bechtold said, should take action and respond to their eviction notice.

“About 75 percent of the eviction cases are granted because the tenant does nothing,” he said.

With the moratorium set to lift, Berchtold encouraged tenants to check if they have an eviction case and verify what court will oversee the case.

“In some courts, if the eviction notice has already been issued those orders will just be enforced come April 1, meaning the order will go to the constable, the constable will come out and lock you out,” he said. “Let’s say the landlord already filed an eviction against you before the moratorium went into effect, that case is paused right now. Those cases, depending on where the eviction is pending, are going to start back up. It’s possible that you already have an eviction order issued against you.”

If they receive a seven-day notice on their door, tenants need to respond.

“It is overwhelming and it is scary, but there are resources to help you,” Berchtold said.

Once a person gets to court or once a lockout occurs, he said there isn’t much legal groups can do.

“When you’re in a court hearing, standing in front of a judge in an eviction hearing, the only thing a judge can really do is say, ‘you’re evicted or you’re not evicted,’” Berchtold said.

When tenants receive an eviction notice and file a response, Berchtold said there is an option to seek mediation.

During a special session of the Nevada Legislature last summer, lawmakers passed legislation to set up an eviction mediation program. Home Means Nevada, a nonprofit established by the Nevada Division of Business and Industry, began running the program in October.

Labor Commissioner Shannon Chambers, who is president of Home Means Nevada, said the program has received more than 1,200 cases since it began.

“Around 45 percent are ending up in some type of agreement that could include rental assistance or another agreement where the eviction is not moving forward,” she said in an email. “Some of the challenges are tenants not responding or not showing up for mediation.”

Chambers added Home Means Nevada is “monitoring the eviction moratorium” and prepared to work with the courts and legal groups to manage increased caseloads. She couldn’t provide any estimates on how caseloads could increase following the moratorium’s end.

While it’s an informal process, Berchtold said mediation could at least get tenants and landlords in the same room — virtually, of course — to potentially find a solution.

“It could be a repayment plan. It could be a definitive move-out date. It could be how the deposit is going to be applied. It can be anything the landlord and tenant can think of,” Berchtold said.

Even if mediation is not successful and the eviction process moves forward, it at least gives a tenant more time.

“If nothing else, filing an answer will get you a hearing in front of the judge,” Berchtold. “If you file an answer and elect mediation, the mediation date has to be set and that would buy you probably a week maybe two.”

For more information, visit the Legal Aid Center of Southern Nevada Covid resource page or call its eviction hotline at 702-386-1070. 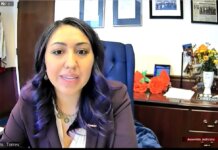 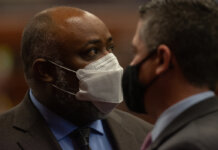