“An empty cell is definitely a place you learn to live without love,” said Frank DePalma, who spent 22 years and 36 days in solitary confinement with the Nevada Department of Corrections.

Without human interactions or access to television, books or any form of entertainment, DePalma told lawmakers Friday, living in a dark, empty cell for all those years resulted in elaborate fantasies and mental deterioration.

“We are human beings and have an innate need to connect with each other. If you don’t have that, you’re going to connect with whatever is there,” he said. “I created fantasies of having a relationship with a woman, falling in love and getting married. These fantasies lived on longer, and longer, and longer. Eight months at a time. I lost touch with all reality. It got to a point where the fantasies I lived in no longer fulfilled me.”

Though he’s been out of prison since 2018, he has never been the same.

When testifying in favor of Senate Bill 187, which regulates but doesn’t ban the use of solitary confinement in Nevada prisons, DePalma feared he wouldn’t be able to articulate how traumatic his experience was.

However, he wasn’t alone in relaying to lawmakers the dangerous effects of solitary confinement.

Mary Buser, a former assistant chief of mental health for the segregation unit at New York’s Rikers Island jail, described having to give antipsychotic medications to those placed in solitary confinement, even to those without a history of mental illness.

“I remember asking myself, ‘what kind of a punishment is this that people need to be medicated in order to endure it?’” she said. “It did not end there. When these meds could no longer hold a human psyche together and we were called to a cell door, it was grim. Inside these cells were makeshift nooses, slashed arms, blood-soaked T-shirts, incoherent babbling, head banging and agonized shell shocked faces begging for a reprieve.”

Senate Bill 187, sponsored by state Sen. Pat Spearman, D-North Las Vegas, would adopt further regulations to ensure solitary confinement is only used as a last resort and used in the shortest time frame possible. The proposal would limit the use of “disciplinary segregation” not to exceed 30 days.

The legislation requires the Department of Corrections to collect data and compile an annual report on its use of solitary confinement broken down by demographics including race, gender, sexual orientation and gender identity.

“Studies have shown confinement is disproportionately used against people of color, LGBT people and people with disabilities,” said Jim Hoffman with the Nevada Attorneys for Criminal Justice. “This is particularly true of trans people who often can’t be housed in the general population for safety reasons and (are) punished for being put into solitary simply for being trans.”

Spearman said the bill builds on Senate Bill 402, which was passed in the 2017 legislative session.

“SB 402 prohibits the Department of Corrections from imposing solitary confinement unless an offender is found guilty of an infraction, is provided written notice of those charges and a hearing is held after an investigation of the alleged violation,” she said. “The bill also prohibits putting offenders with serious mental illness or other significant mental impairments in solitary confinement, unless an offender poses a safety threat to him or herself, the staff or other inmates.”

Despite the 2017 measure, Spearman said there is “virtually no data” that shows how or if the Department of Corrections implemented the law.

A 2019 report from the Vera Institute of Justice showed the use of solitary confinement, often referred to as administrative or disciplinary segregation, gave insight on the practice in Nevada.

Nick Shepack with the ACLU of Nevada, who presented alongside Spearman, said key findings showed a high number of people in solitary had mental health needs.

“There was a very large number of people being held in solitary longer than they were sentenced because of a lack of bed space,” he said. “There were significant numbers of people being released directly into the community from solitary confinement. It makes re-entry very difficult.”

Spearman said the report showed people of color were placed in solitary at higher rates than white counterparts.

“The Vera Institute study makes it clear that in Nevada solitary confinement disproportionately impacts Black and brown people,” she said. “It makes the goal of returning to society as a whole, healthy and productive person infinitely more difficult.”

Officials from the Nevada Department of Corrections testified in “neutral,” saying their only concern was getting the resources and funding to implement further requirements.

While formerly incarcerated people, families who have loved ones in solitary confinement and civil rights groups supported the bill, they argued the state could go further and ban the practice.

“Punishment does not mean breaking and destroying a human being beyond repair,” said Kendra Bertschy with the Washoe County Public Defender’s office. 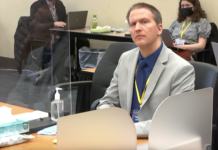 ‘Much worse than a cruise ship’: Prisoners’ lives at risk from...