The first mural Bracken Hermansen painted was at her children’s elementary school 10 years ago. Jellyfish, eels, and a narwhal still cover the walls of the school’s marine science lab but the children who enjoyed the colorful room in previous years are largely gone.

“My son is a senior and went back to school today and he texted me that he’s the only kid in class,” Hermansen said. “I guess that’s how many kids are still staying home.”

After schools closed in March 2020 more than half of Hermansen’s income was eliminated overnight, she estimates that up to 60 percent of her work painting murals is commissioned through the Clark County School District.

“I had a bunch of sketches and invoices ready to go and I figured I’d give it a few weeks,” Hermansen said. Now, almost a year later schools have begun reopening but the jobs have been slow to return. “The ones that were on hold from last year still haven’t been done.”

Both she and her husband were unemployed for six months after the pandemic ravaged Nevada’s economy. A few jobs painting murals for closed restaurants and sleepy pediatric offices supplemented the family’s income from unemployment, but the commissions she could expect before had vanished.

It’s not unusual for an artist to hit dry spells that can last a couple of months, said Hermanson, but as three, six months and more went by without calls, worry set in.

“Once you’re in the field 10 years the loss is a little unsettling, but I didn’t look for another job,” Hermanson said. “This is what I do.”

Work is ‘spotty at best’

Nevada’s Art & Culture sector has suffered a loss of more than $1.7 billion in revenue during the pandemic, according to Americans for the Arts, a D.C.-based advocacy group.

The hardest-hit states, by percentage, are all smaller states, including Nevada, according to a Brookings report on the creative economy, mostly due to a higher concentration of creative industries that are more exposed to losses. Between April and July 2020 alone Nevada lost nearly 35 percent of the state’s creative occupations — an estimated 26,100 jobs — on a percentage basis, the second-highest loss nationally behind only Alaska.

A day after The Noir Movement, a local band played their second show in a year long booking at the Linq Promenade, the statewide shutdown ended all their monthly events there. The band’s performances at several other venues were canceled too.

“It completely changed everything for me,” said guitarist Adrian Tanner. “I was doing maybe four gigs a week with my band and trying to cram in all this audio engineering on top of it. It was a full schedule every single week. Then March 17 hit and all of my contracts and all of my gigs literally just disappeared instantly. I had no work at all as a musician.”

Even his steady work as a live audio sound engineer for the Clark County Parks and Recreation department ended when he was laid off soon after the shutdown. He wasn’t hired back until August and describes that workflow as “spotty at best.”

It wasn’t until the end of last year when Tanner started getting bookings again that he felt reassured he would be able to return to music, he soon quit the job he’d found during the pandemic at an insurance agency.

“I hope everybody that got out of music can get back into music as soon as possible. It’s hard to see good musicians and good artists just drop it because of the world going to crap,” Tanner said.

The silver lining is that the pandemic may bring about a shift in perspective on how vital arts and entertainment is to the city, he said.

“In Vegas, I think people realize how much arts and entertainment is important to us because the entirety of what you do for fun in Vegas is contingent on who you can go see or where you can go party. Now we have none of that,” Tanner said.  “I think people who took all the creative stuff you see for granted can really start to appreciate it.”

While an artist’s income may be unstable at times, Nevada as a whole runs on an entertainment economy, from Reno to Las Vegas. In Nevada, arts and culture production added $8.7 billion to the state’s economy, accounting for 5.5 percent of the state’s GDP while producing more than 40,000 jobs, according to 2017 data from the U.S. Bureau of Economic Analysis.

In December, Chantell Peck had her photography displayed at a small art gallery on the shores of Lake Tahoe. In January, she received an email informing her the gallery had decided not to renew their lease.

“We are asking all artists to respond as soon as possible to coordinate art pick-up, etc.,” read the email in bold.

“I haven’t heard back from them,” Peck said. “Galleries and art shows, all those things that make Reno Reno, it’s really scary to think those things might never come back. I’m hoping they do.”

When the pandemic started Peck was working for a small locally owned company in Reno as a marketing assistant and photographer. The stability of the job was a draw for her but as the pandemic progressed the lack of health insurance offered by the company on top of unsafe work conditions led her to take a leap of faith and work at her photography business full-time.

“You kind of just go along with the flow until one day you realize I can die working for somebody else’s dream or I can go after my own,” Peck said.

“…For me, I’d rather risk it all and go after what I love than be miserable chasing a paycheck.”

A loss of income is not the only danger the pandemic has brought on creative workers.

Hisonni Johnson’s career as a filmmaker was on the rise. His latest film “Take Out Girl,” the story of a young Asian American woman who becomes entangled in the drug world, had won numerous awards in film festivals throughout the country, including Best Director at the American Black Film Festival 2020.

In the midst of his achievements, Johnson contracted COVID-19, leaving him ill for about 12 days with breathing issues, body aches, and a loss of taste and smell. By early March, he was still experiencing body aches.

“When I got COVID-19 and I was out of breath walking up and down a flight of stairs there was a time when I was scared I would never be able to make a movie again, not the way I always did,” Johnson said. “I thought, if I can’t breathe going up and down the stairs how am I going to carry a hundred-pound piece of equipment?”

After 12 years of building his film company and three years of working on the film, Johnson and his team weren’t able to attend any of the festivals because of restrictions around the pandemic, missing major milestones and networking opportunities.

“That’s been tough on us from a confidence standpoint, from a morale standpoint,” Johnson said. “It’s three years of hard work and 12 months of going on the festival circuit. Going from one cool location to another, getting congratulated for the work you’ve done, celebrating with others, but that’s not how things turned out at all,” Johnson said.

Johnson said despite the setbacks, the success of the film gives him hope for the growth of much-needed diverse stories in the film industry, where high costs often pose barriers for minority filmmakers.

“The word art and the word minority are very interchangeable,” Johnson said. “There are so many parts of life that would not exist without artists and the parallel is that there are so many aspects of American society and life that would not exist without minority contributions. Artists and minority communities are such an irreplaceable part of this American tapestry and yet we are constantly overlooked.”

All four artists — Johnson, Tanner, Peck and Hermansen — were recipients of an artist relief grant awarded by the Nevada Arts Council, a state agency charged with distributing funds awarded by the National Endowment for the Arts (NEA) and other public programs.

The council awarded 175 grants of $1,000 to individual artists throughout the state. In total, it received 937 applications.

“Artists are among the many groups of people who have been severely impacted by COVID-19 and the economic shutdowns necessary to control the pandemic,” Manfredi said. “Individual artists are critical to the creative economy in Nevada and their financial health is directly connected to Nevada’s economic recovery.”

For Hermansen, commissions for murals are starting to trickle in again. She says she doesn’t expect schools will request any murals related to COVID or the new safety protocols people now know by heart as a result. Like the 1918 Spanish flu, the COVID pandemic may leave a meager legacy in art and literature created during its crushing reign.

“I don’t think they want the kids to be reminded of this weird time,” Hermansen said. “We all get it. We’re living through it. We know.” 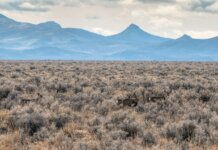 Opposition to lithium mine grows among tribes, conservationists

‘Let’s just get it over the line.’ Nevada Democrats vote to...

Reid: “Speak out against hate. Don’t let it go.”