A measure that could add dozens of cannabis dispensaries to Nevada’s population centers was widely panned by competitors who say the move would flood the market, stymie ownership by women and minorities, and thwart efforts to address “social equity applicants” — those harmed by the criminalization of marijuana and excluded from positions within the industry.

Senate Bill 235 would eliminate medical marijuana licenses for dispensaries, allowing all stores to sell to medical and recreational patients. Locations that hold both licenses, if given local approvals, would be allowed to essentially transfer a license to a new location.

The bill is sponsored by Sen. Dallas Harris and has the backing of “all the members of the Dispensary Association who didn’t win a license in the last round,” NDA board member David Goldwater, one of the bill’s primary backers, said last week.

The legislation has reopened wounds between the so-called ‘haves’ and ‘have nots’ — the dispensary applicants who prevailed in a round of 2018 licensing and oppose adding more stores, and the bill’s proponents — those who were passed over for licenses in 2018 and filed a legal challenge to the state’s selection process, which awarded multiple licenses to some applicants and none to others.

Many of the state’s larger cannabis licensees have been purchased by national corporations or foreign interests.

The owner of Nevada’s Essence dispensaries, Green Thumb Industries, is the subject of a Justice Department probe into allegations of pay to play involving the Illinois state licensing process, the Chicago Tribune reported this week.

Judge Elizabeth Gonzalez found fault with the Department of Taxation’s procedures but stopped short of providing a remedy.

“There were some very serious flaws in that process,” attorney Mark Fiorentino told members of the Senate Finance Committee on Thursday. “You’re in a unique position to fix them.”

But opponents of SB 235 say a legislative fix amounts to an end run by the proponents around the state’s regulatory authority, the Cannabis Compliance Board, the third entity to regulate the industry in its brief history.

“After five years of tumult on nearly every level, the NDA and its members are relieved to have a regulatory framework,” president Tisha Black testified, adding the measure would “perpetuate instability and lawsuits.”

Black is a board member of Clear River LLC, which was successful in its 2018 licensing bid.

Lawmakers expressed frustration with what they perceived as a failure by proponents to reveal the bill’s true intent — generating more business or protecting the public.

“My understanding of what the bill was trying to solve was confusion in the marketplace,” Sen. Julia Ratti said of medical patients who are unable to find their medicine or receive the proper discount at stores that are only licensed for recreational sales.

Opponents say the measure would allow as many as 110 new locations to open.  Proponents contend the number is closer to 20.  Additionally, some 50 provisional licenses granted by the state have yet to be exercised.

Too much of a good thing?

An economic analysis commissioned by the bill’s proponents found “under Nevada’s current cannabis market’s tax structure, the state can handle at least another 118 to 501 dispensaries above the 80 that are now in operation for a total of 198 to 581 dispensaries.”

The study, from RCG Economics, says the state can accommodate as many as 1,363 dispensaries, “if illicit cannabis sales were to be replaced by legal sales,” a prospect that would “probably require reducing the tax liability of the state’s cannabis industry; thus, potentially putting downward pressure on prices to make legal cannabis more competitive with illicit cannabis.”

But attorney Joe Gutierrez, who represented Thrive in the massive case before Gonzalez, says the bill’s proponents, as plaintiffs in the litigation, argued “additional licenses would do them harm.”

“If the state were to authorize the addition of these new licenses, what would this do to the social equity applicants being discussed?” asked consultant Scot Rutledge, representing the Chamber of Cannabis. “We don’t see the passage of this bill working in favor of diversity.”

An amendment offered by Harris provides for individuals harmed by the prior criminalization of marijuana to eventually be eligible for inclusion in the industry.

Opponents of the measure said the bill’s proponents would have addressed the issue of social equity applicants immediately if it were a priority, rather than propose an amendment that calls for the CCB to address it in the event of future licensing.

“Sen. Harris heard the feedback on the bill,” Goldwater told the Current Thursday. “We worked with her to help make it a better piece of public policy. While it’s not what we hoped, Senator Harris is doing a good job balancing everyone’s interests.”

She said the bill “threatens the strength and integrity of the industry and it’s not something the board would ever support.”

Goldwater said it’s “no surprise” companies that oppose the bill won multiple licenses in the last round and pointed out the “irony of them objecting to dual license holders getting one new location.” 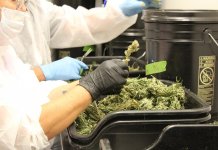