Some 185,000 residents of Henderson and southwest Las Vegas who currently lack nearby transit service would have access to new options, including on-demand microtransit — a ride in a multi-passenger van — if lawmakers approve Senate Bill 362.

“District F includes some of the fastest growing parts of the valley and much of my district doesn’t have access to transit,” Clark County Commissioner Justin Jones testified Thursday before the Assembly Committee on Growth and Infrastructure. Jones says 75,000 of his constituents lack access to transit.

Thanks to federal stimulus funds, the Regional Transportation Commission, which cut $9 million in transit service in response to COVID-19 and already-declining Strip route revenue, intends to restore 96 percent of its previous routes and extend transit to unserved areas.

But the RTC isn’t relying on standard, 40 foot buses.  It’s opting for a government-run on-demand service for both paratransit and fixed route passengers for the same cost as a bus ride — $2 each way.

RTC Chief Executive Officer M.J. Maynard says microtransit is “a smaller, on-demand service people can book on their mobile devices rather than having to book with the RTC.”

Some neighborhoods are not fit for buses, according to the RTC. In 2019, then-RTC CEO Tina Quigley told the Current the agency expands transit “when a transit desert is transit-centric. In Anthem, they don’t want a bus in their neighborhood.”

“They have single-family homes. The access is circuitous. We work best on a grid system” Maynard said at the time. “You have to have multi-family homes, employment density, retail, employment centers.”

Under the new pilot program, paratransit customers will be picked up at their door and taken to their destination — a drastic change from the current policy requiring paratransit customers, who are disabled, to make their way into the service area, sometimes more than a mile away.

The RTC currently has more than 21,000 certified paratransit customers, but only 7,000 are actively using the service, says RTC spokeswoman Angela Torres Castro.

A passenger would call the RTC or access the service on a mobile device, according to Maynard, who says a microtransit vehicle would pick up the passenger within 30 minutes and deliver them to a bus stop, where they’d transfer to a bus.

It’s not the RTC’s first foray into on-demand service.

Trip to the Strip put a $2.4 million dent in the RTC budget and was criticized for cannibalizing service at a time when residents lacked transit

Now, the RTC is hoping for another pilot program, but this time with the focus on residents.

“Innovation is disrupting every industry and the RTC needs to be able to quickly respond to customer demand and provide the most effective and efficient transportation for our customers,” Maynard told lawmakers Thursday.

Maynard says other municipalities have employed microtransit since 2016.

Henderson Mayor Debra March, chair of the RTC, testified that businesses are clamoring for reliable transportation for their employees in the west part of the city, which lacks bus service for 31,000 residents.

The RTC says it can begin to provide on-demand transit as early as August, if it’s approved by lawmakers and the agency’s board.

The Southern Nevada Home Builders Association and the Vegas Chamber testified in support of the measure.

Peter Guzman of the Latin Chamber of Commerce said expanded service would allow members to attract new customers who currently have no access to their businesses.

Kyle Davis, lobbyist for the Nevada Conservation League, testified the measure would reduce the number of vehicles on the road.

Clark County is the only county in Nevada that lacks the authority to provide on-demand microtransit service.

The pilot program would serve the south and southwest portions of the valley, but Maynard says it could be expanded to other areas.  The RTC contracts with private companies for its transit services and would do the same for microtransit.

Correction: The original version of this story mistated the amount of bus service cut during the pandemic. 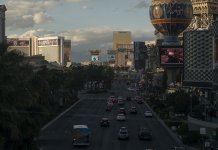