The president of the union representing Las Vegas Metropolitan Police testified Friday against a measure that would require police to use de-escalation techniques before resorting to a higher level of force.

Standardization of use of force policy should be left to police, he told members of the Assembly Judiciary Committee, even though the measure largely reflects Metro’s policies.

“You said this is the policy that you preach. The concern here is not the preach, but the practice,” observed Assemblywoman Shondra Summers-Armstrong. “If LVMPD is the gold standard and there has been an effort by those involved  to codify it to make it consistent across the state, which we know is not the case, what is your concern and what is your opposition?”

“By instituting things into law, everything has the potential to start leading down the road of penalties and enforcement and potentially people going to jail for violating, maybe unknowingly, laws,” Grammas responded, adding he doesn’t want police going to jail for “doing things that they don’t know they shouldn’t be. I don’t think it needs to be codified in law.”

“So, it’s ok for citizens…to be held accountable when they don’t know the law and don’t follow that law to the letter and there are penalties for them?” Summers-Armstrong asked Grammas. “But not for police departments that get millions of our tax dollars for training — not to have any possibility for being accountable for what they should know to do?”

Grammas said even with in-depth training, policy “can’t capture everything.”

“I would not want to see our officers get prosecuted for things that are vague,” he said.

SB 212 also requires officers to identify themselves, if it’s possible to do so safely, before using escalated force and requires police to use a level of force that is reasonable, based on the level of force or resistance of the person they are trying to apprehend.

It also calls for police to adopt a policy delineating the threat posed by a variety of individuals — those who are unarmed, under the age of 13, over the age of 70, physically frail, or experiencing a mental breakdown.

“What kind of threat do they pose?” asked Sen. Dallas Harris, the bill’s sponsor.

SB 212 would require law enforcement to submit use of force data to a centralized location that would be available to the public.

Emily Walsh wrote her masters thesis on use-of-force data availability and testified that because of the lack of centralized data, the public turns to websites such as mappingpoliceviolence.org to glean information.

Walsh said since January 1, 2013, police in Nevada have been involved in at least 149 deaths. Blacks, who make up 8.5 percent of the state’s population, made up 17 percent of victims in officer-involved deaths.

“This is not a bill that is designed to target individual officers or turn them into bad guys as they do their job,” Harris noted. “We just want to get the data so we know what’s going on.”

Chuck Callaway, lobbyist for LVMPD, testified use of force data is already available to the public on Metro’s website.

Callaway praised Harris for working with police on the measure.  Because of committee rules involving amendments, Callaway testified in opposition but said he anticipates supporting the bill once language is cleaned up.

SB 212 also provides restrictions on the use of restraint chairs by police.

“Originally, I wanted to ban their use completely,” Harris testified. “This is based on a request from a young man whose brother died in a restraint chair.”

Eric Farah testified about the death of his brother Nicholas, who was placed in a restraint chair by Metro officers and made to bend at the waist with his handcuffed arms extended behind him. He stopped breathing after a little more than a minute and was pronounced dead at the hospital.

The bill also would regulate what officers can do at protests, such as those ignited last year by Floyd’s death.

“We shouldn’t indiscriminately shoot rubber bullets into a crowd,” Harris said. “If you are going to use chemical agents to disperse, call it an unlawful assembly first.”

Harris said the bill’s provisions are in line with Metro’s operating procedures, revised after assessing the protests last year.

But Callaway and other law enforcement officials took issue with a provision that requires police to advise protesters three times to disperse in a number of languages. He suggested English and Spanish should suffice.

Tonya Brown, who identified herself as an advocate for inmates and the innocent, said the bill doesn’t go far enough.

“You’re right,” responded Holly Welborn, policy director of the ACLU of Nevada. “It doesn’t go far enough. It never does from our perspective.”

Welborn said bringing the bill to lawmakers had been a “traumatizing process, to be quite frank.”

Welborn noted that so-called “non-lethal weapons” such as rubber bullets “can harm people. They put me in the emergency room. We shouldn’t be using those to disperse.”

At a June 1 protest, police fired rubber bullets at Jorge Gomez, who appeared to be leaving the scene after police ordered protesters to disperse. A police report says the rubber bullets sent Gomez, who was armed, running in the opposite direction and into oncoming police who fired 19 shots, killing the young man.

“You cannot use those projectiles on an individual,” Welborn said. “You must give them a chance to disperse.”

Law enforcement, including Callaway of Metro and Eric Sprately of the Nevada Sheriffs’ and Chiefs’ Association, praised Harris for her commitment to the measure and her work with police and others.

“It’s because of this cooperative deliberation that we are able to arrive at a supportive position,” Sprately said.

Corey Solferino of the Washoe County Sheriff’s Office praised Harris for her “willingness to understand the complexities” of police policy.

Harris, however, voiced her unwillingness to water down the measure.

“I will not accept any amendments that stakeholders do not agree on across the board,” she said. “I just want to reiterate to the people I’ve been working with for months and months —  we’re going to lock this language down as a group.” 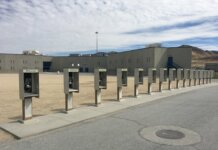