ARP saves the day for RTC

The pandemic curtailed service, but the bus system still made 56 million trips getting people to work, medical appointments, grocery stores and other destinations. (Photo: Jeniffer Solis)

With the new federal aid, The Regional Transportation Commission of Southern Nevada (RTC) will be able to restore service to nearly pre-pandemic levels by August, according to the agency.

In the early months of the pandemic, ridership on the Clark County transit system fell roughly 60 percent and paratransit demand fell by 70 percent in, according to the RTC. The most profitable route in Southern Nevada, the Las Vegas Strip corridor, declined in ridership by 75 percent.

As a result, the RTC cut bus service by 25 percent and ran on a low-frequency Sunday schedule seven days a week. The agency was also bracing for a $15 million revenue shortfall, due mostly to a dramatic drop in sales tax revenue and bus fares collected.

“Even after all of that we still had a $15 million dollar shortfall,” said RTC spokeswoman Angela Torres Castro.

The agency projected a budget deficit as high as $61 million by 2030. However, thanks to $303 million in relief and recovery funding from the federal government, projected deficits for the RTC could be eliminated through 2027.

“It’ll get us through 2027 and then come 2028 we start to see that we’ll have those budget challenges again,” Torres Castro said.

The agency now has five years to use the money provided by the American Rescue Plan to avoid layoffs and service reductions, which disproportionately harm workers who are more likely to depend on public transportation.

By the first week of June the agency plans to hire back all furloughed employees.

About $6.9 million will be used to bring service routes back, restoring up to 96 percent of routes to pre-pandemic levels and giving transit access to some 185,000 residents in the valley that currently lack nearby transit service, about 21,000 of whom are living at the poverty level.

As part of the plan to restore service to pre-pandemic levels and expand transit access to areas that lacked service due to funding challenges, the agency is also proposing transit service changes that will bring new routes and services to underserved communities, inlcuding in Henderson and southwest Las Vegas. 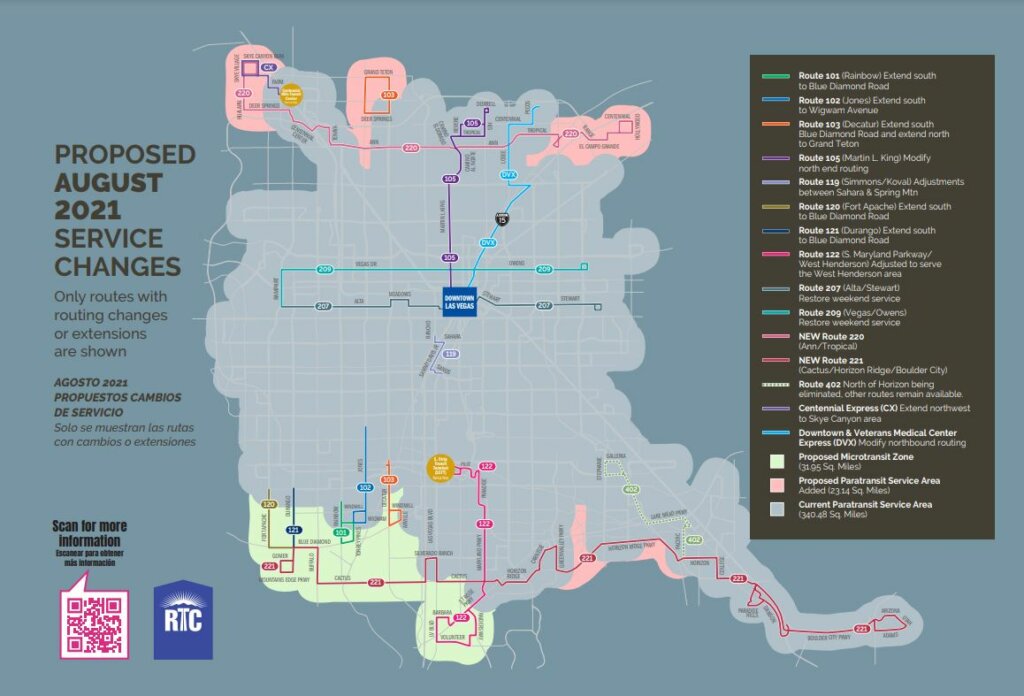 Growth in population and job density in Southern Nevada has led to a need for several new bus routes and expansions, say transportation officials, but a lack of funding and plummeting revenue held back improvements even before the pandemic.

“There’s a lot of new development going on in west Henderson,” which means new employment opportunities, Torres Castro said. “This will allow people access that currently does not exist.”

“We are adding a ton of frequency in the urban core as well. For our transit riders the number one thing we’ve heard over and over again is that they want more frequency,” Torres Castro said.  “They don’t want to wait every hour.”

The agency is seeking public comment on proposed transit service changes through May 31, which can be accessed on the agency’s website. Proposed changes are scheduled to be approved in June.

“We took the map and we are relocating those service hours based on the needs of our community and the areas they have told us. We are now looking for public comment to validate that this is in fact what our community is looking for,” Torres Castro said.

“We believe that the service changes that are currently in the system will accommodate” current identified demand priorities, she said. ”If there are additional adjustments that need to be made we’ll monitor it.”

The total cost to maintain existing service and add planned improvements is about $250 million over the next five years. Much of that cost can now be covered by federal funding from the American Rescue Plan.

Pre-COVID-19 the RTC, the 14th busiest public transit system in the United States, was already facing a budget deficit due to declining gas tax and farebox revenues, and the pandemic deepened those projections.

“Prior to the pandemic we were facing a budget shortfall and because of the pandemic, it has only exasperated our budget challenges,” Torres Castro said.

The RTC’s roadway funding program is facing major shortfalls too. Roadways in Southern Nevada are largely funded by a combination of state gas taxes and revenue streams such as sales taxes and federal funds.

Weak revenue from fuel taxes which are used to fund roadway projects and maintenance, however, have undermined attempts to stabilize transportation funding in the state for years, forcing legislators to consider raising gas taxes or exploring other ways to increase transportation spending.

There was a time when RTC saw a $6 million annual profit from public transit revenue, largely driven by tourist dollars in the resort corridor along two routes: the Deuce, and the Strip and Downtown Express (SDX). That revenue, in turn, helped finance public transit throughout the city. But a rise of transportation network companies (TNC’s) like Uber and Lyft has eaten into the RTC’s profits on the strip.

The RTC has authority from the Legislature to seek a sales tax increase via ballot initiative by 2024.

“While we know this is a one time influx of funding we have the ability to go to a ballot question from now up until 2024 and that is something our executive team can and will explore,” Torres Castro said.

“We are grateful to the (congressional) delegation for recognizing that public transportation is an essential service, as we saw from the pandemic,” she said. “We still carried 56 million trips for people who were still taking it to very essential jobs, to medical appointments, to the grocery stores.” New federal relief funding enable RTC “to provide a safe and reliable service for those who need it the most.”

ARP saves the day for RTC

What role does transportation play in charter school… by April Corbin Girnus March 21, 2022
Horsford calls on Senate to work through holiday and pass… by Jeniffer Solis December 21, 2021
Race for lieutenant governor features primaries on both… by Jeniffer Solis May 16, 2022