Fired but not gone yet, Jara still roiling CCSD

Recently fired CCSD Superintendent Jesus Jara started out his first week as a lame duck by announcing he was giving raises to 16 of his top staffers – including 15 currently employed people and one Chief Information Officer to be named later.

Then, the Trustees who are loyal to the ousted superintendent derailed an attempt to name his interim replacement, aided by an abstention from Trustee Irene Cepeda.

The raises, which were made public November 1, range from $7,700 for Chief Academic Officer Dustin Manci; and Chief College, Career and Equity Officer Mike Barton; to almost $45,000 for Chief Financial Officer Jason Goudie. Most of the other 16 admin positions got raises in the $25,000 range. 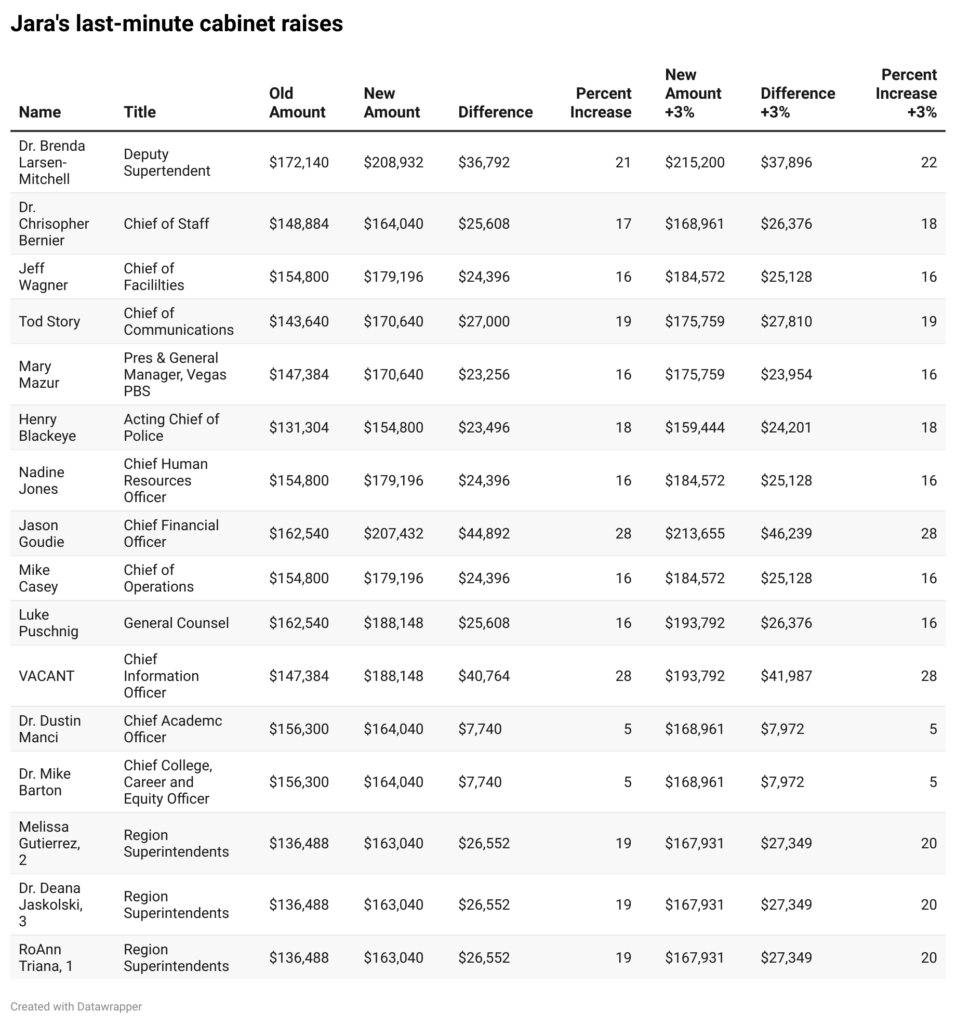 This move came just days after Jara was terminated for the way he treated staff, and his interference in negotiations with CCEA. Officially he was terminated for convenience – which means the Board of Trustees don’t have to give a reason. The reason, in this case, would have forced the board to divulge confidential and privileged information.

Even so, Jara’s contract does not state that he has to remain in the admin building on the job for 30 days. He could be put on administrative leave, according to Josh Reid, former Henderson city attorney and partner at the Fennemore law firm.

Also, it is standard operating procedure in the business world for a terminated employee to be walked out the door.

“It seems like they should have done that with the board action” firing Jara on October 28, said Reid, who questioned why Jara would even want to go back to the Sahara admin building.

“Once you’re told they don’t want you anymore, you usually don’t want to show back up to work.”

The email about the raises that spread like wildfire via text and social media platforms on Monday refers to a recently enacted salary policy, regulation 4291, as justification. There is no follow-up on how the district believes 4291 gives Jara the ability to give raises to his top employees without prior board knowledge or approval. A look through CCSD’s prior agendas and videos shows that Chief Human Resources Officer Nadine Jones summarized the new policy to the board on July 8. She did not explain beyond her summary.

Still, Trustees seemed surprised that Jara had the right under 4291 to give his entire executive team – including Jones – pay raises ranging from 5 to 28% without informing the board.

Board president Linda Cavazos shared her surprise on social media:

The Board of Trustees was unexpectedly notified at 10:52am today, via email, regarding the raises announced today for the Superintendent’s Executive Cabinet members. Further review of these raises is possible, but I cannot definitively comment at this time. @ccsd

Trustee Lisa Guzman noted that the board was told in behind the scenes briefings on 4291 that Jones and her team were undertaking a comparative compensation study to see how top school district employees in other large cities are paid. According to Guzman and Trustee Danielle Ford, they did not see a report on the results of Jones’ study.

Guzman said she heard raises were being given last week, around the time that Jara’s termination was on the table, when all the people who eventually got the raises signed a letter in support of the superintendent.

“I think it is fair to say that I was surprised by the amounts that were given but knew that increases would occur after ALL the union contracts were settled,” said Guzman, who noted that the support staff union, which she works for, has not yet received a contract. The administrators contract and teachers contracts were both approved at the October 28 meeting. Each group was given a 3 percent raise.

“Our understanding was [cabinet raises] was the same percentage that the support and teachers were going to get,” said Guzman.

The cabinet level administrators who were given raises are at-will employees not covered by the administrators contract, said Jeff Horn, the executive director of Clark County Association of School Administrators and Professional-Technical Employees (CCASAPE). All of these top level admin are, however, associate members, so they can get health insurance. And as associate members – as the memo announcing the raises noted – these 16 positions will get another 3% on top of Monday’s announced salary increases.

Upon reviewing the policy, Richard Dreitzer, the managing partner at Fennemore and an expert on contract law, noted that the verbiage in 4291 legally gives the superintendent the right to do anything he wants.

Each part of the amended policy for at-will employees ends with “Said placement is at the discretion of the Superintendent.”

“With no qualifications for that? It says what it says,” Dreitzer noted. “If I were writing this, I would add a few words after ‘discretion of superintendent’ [to say] ‘subject to appropriate review by the trustees.’”

“Then the problem goes away,” said Dreitzer.

Trustee Ford noted that she objected to exactly the sentence that Dreitzer is referencing while she was being briefed on the changes to 4291 by Jones with Trustee Irene Cepeda.

“We’re told at every meeting by Trustees Brooks and Williams, and Jara himself, that any questions we have are operational, so it feels like putting ‘at the discretion of the Superintendent’ is redundant,” Ford said.

The fact that it was only referenced in this policy gave her pause.

“When that line was questioned, they told us it wasn’t a substantial change. That the superintendent always has final authority, everyone already knows that.

“If they had said, ‘This change will allow the superintendent to increase cabinet’s salary by half a million dollars without board approval’, I guarantee it would’ve given Cepeda pause too.”

I’m not sure I would bet on that guarantee. On Thursday night, Cepeda abstained on a vote to move forward after an uncharacteristically cooperative and constructive board discussion that laid out a process for getting community input to put an interim superintendent in place. Trustees Williams, Brooks and Evelyn Garcia-Morales voted against the process, which had been proposed by Ford, and built on during the discussion. When Cepeda abstained, the room was stunned.

The trustees also did not address the raises or policy 4291. Trustee Katie Williams tweeted to me during Thursday’s board meeting that the closed session in which the board was going to consider parameters for Jara until December 1 was canceled after I asked questions, prompted by Reid, as to how a closed session about a board directive to the superintendent comported with Open Meeting Law.

Even if 4291 gives Jara complete authority to raise – or even lower – salaries of his top staff at his sole discretion and whim, Reid said that he would not expect to see it happening with the whole group.

“I’m not sure if this policy says you can review a whole class of people and make this change,” Reid said. He also noted that he had been involved in or witnessed the results of numerous compensation studies, and usually the findings are that some people are overpaid and some are underpaid, and the recommendation is to adjust salaries accordingly.

“I’ve never seen a class and compensation study where everybody goes up,” said Reid, adding, “If [Jara] was staying in his job there’s no way he would have done that.”

Reid also agreed with Dreitzer that the ultimate authority rests with the Trustees.

“If the board doesn’t like what was done, they can change it.”

The question is, will the board be willing to change it. Or will they abstain?

There is no word on next steps.

Jara – who sent out a note to staff on Monday reminding folks he was still in charge – did not attend Thursday’s meeting.

Fired but not gone yet, Jara still roiling CCSD

Broadcast, digital and print journalist Carrie Kaufman writes the You're Overthinking It newsletter on Substack. She has covered the Clark County School District for public radio and The Nevada Voice since 2015. Follow Carrie on Twitter: @CarrieKaufman