One is about a world that is degenerating into madness in the face of a great storm, where nothing is what it seems and nihilism and betrayal are everywhere.

The other is one of Shakespeare’s greatest tragedies.

It started Friday, when two pieces of news collided.

One was that the Clark County School District was doing something right by teachers and staff. They are giving all full-time staff a retention bonus: $1,000 now if they were still working for the district as of January 1, and $1,000 in May if they continue working through the rest of the school year.

Not a bad bonus for six months. I asked, on Facebook and Twitter, what people thought. There were some folks who were thrilled by this. Most people were like, “Eh, it’s a nice gesture.” What surprised me, though, were the numbers of people who were like, “It’s not nearly enough to make up for what we’re going through.” They pointed out that they have unpaid medical bills that are more than $2,000, because Teachers Health Trust is still not whole. They pointed out that many of them will have to use up their sick leave if they get COVID or have to stay out of work, and that nurses got a $10,000 bonus last year.

There are roughly 200 school nurses in Clark County. That means that bonus cost the district about $2 million. CCSD says it has roughly 40,000 employees in the district. If all of them are eligible for the bonus and stay through the end of the school year, then giving these bonuses will cost $80 million. But, CCSD also says in the supporting documentation for this week’s board meeting that the ceiling for these bonuses is $66 million. Which means they are only counting 33,000 people as eligible employees.

The good news is that anyone covered under a bargaining unit – be it CCEA or ESEA or Teamsters – gets the bonus, as long as they’re still slogging through and continue to do so till May.

The weird part is that these bonus agreements last for two years. I have sent an inquiry to CCSD’s office of communications about why something that has a payout that ends in five months is in effect for two years. If teachers or staff leave after May 25, will they have to give back their bonuses? I’ll keep you posted if anyone answers.

As for who doesn’t get the bonus, substitute teachers have gotten increased pay per day, so they are not eligible for this. And all of the cabinet members who got a combined $428,000 in raises? They are not getting the extra $2,000.

The other piece of news, of course, is that CCSD is giving kids an extra two days off over the holiday weekend, and giving staff one work-from-home day and one day off because of COVID staffing issues. This was announced Tuesday, but became pretty clear last Friday when teachers and principals started anecdotally reporting high numbers of students and staff staying home for the week.

Principals I talked to last week reported they had up to 30 percent of students out, with a commensurate number of teachers. One high school teacher told me roughly 40 percent of his students were out last week, while another teacher told me there were 33 teachers out in a school of 140 educators. A high school principal told me they were grateful to have only 10 percent of their staff missing. Another teacher told of walking into a classroom where there was no teacher and seeing one of the students teaching the class. Many schools dumped students in the multi-purpose room without a licensed teacher. Whether they had COVID or couldn’t get tested or just had scared parents, no one knows. Data is a bit hard to get a hold of when everything is in chaos.

The data that CCSD did put out is… I’ll be kind and say “confusing.” Take this chart. 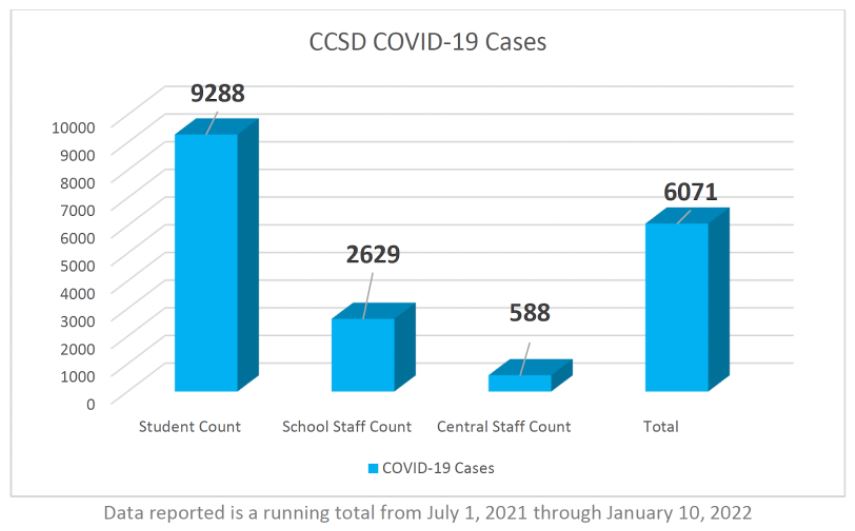 It should be pretty simple. It’s a total of COVID cases from the beginning of the fiscal year, July 1. It breaks down the numbers into students, school staff and central staff. Then it gives a total.

Any fourth grader can see, however, that it doesn’t give a total. It subtracts the second and third numbers from the first. 8NewsNow simply corrected the error and reported it. But I think it’s important that people know how problematic CCSD is that they put out incorrect graphs to begin with. The rest of the report is not much better. The new case count and the count per 100,000 implies that the district has about 346,000 students. I believe we’re less than 320,000 at the moment. Perhaps one of the students can teach the data folks how to do simple math?

I checked this report with Nathan Trenholm of Data Insight Partners. You know, the guys that Superintendent Jesus Jara is STILL trying to keep from working with schools. I was hoping that Nate would play the wise fool to my foaming Lear and tell me I was crazy, that these graphs looked perfectly fine, and I need to get myself to shelter and sleep it off. Alas, he found even more errors than I had.

I should also note that CCSD is looking at positive cases, but it’s not clear where they’re getting the information. Teachers were posting pics of their phones last week showing they had been on hold with the Emocha testing center CCSD is contracted with for hours. One woman had been holding for nine hours, and still hadn’t gotten through.

Teachers who have been flagged on Emocha for having come into contact with someone must get tested before they can go back to school. But they can’t get through to make an appointment to get tested.

Trustee Lisa Guzman says that’s because there is a shortage of Emocha nurses because of COVID exposure or infection.

“If there is a work shortage in the schools, there’s also a work shortage on the hotline,” Guzman said. “Teachers are really frustrated because they really want to come back to work, and they can show a negative test (from another testing site), but unless it shows it on the Emocha app, they can’t come back to the classroom.”

The most depressing thread I read this weekend, though, was from a group of school leaders who weren’t necessarily from Clark County, though they were interacting with a CCSD leader.

One from a Midwest state said they had 100 kids out on Friday – out of less than 500. One-fifth of the students were out?

A parent in another state reported their local high school had 350 students out of 2,500 gone on Friday. And the nurse was sending people home. That’s at least a 14 percent rate.

The stories just kept coming. With this nihilistic acceptance. I felt like I was watching dispatches from a war, where the soldiers were like, “Yep, that’s what it is. That’s our job.”

Except it’s not their job. Not even remotely.

All around us the storm is raging. Some of us are raging at it. Some are trying to assert as much control as we can, even if it means just getting to shelter. Some have given in to the madness.

Chicago Public School teachers made a stand last week to keep themselves safe and healthy, but ultimately had to give in and go back to school in person.

The Atlantic published a piece essentially blaming teachers for being selfish – and Democrats for trying to keep them safe.

And an Oklahoma teachers college announced they were suspending trying to train new teachers. Nobody is applying.

We are living in a world of madness. Our educators are at the eye of the storm trying desperately to make some sense of it. But education in the U.S. – and especially in CCSD – was pretty broken before the pandemic. The ship is cracking. How many people will crash on the rocks before this ends?

Broadcast, digital and print journalist Carrie Kaufman has covered the Clark County School District for public radio and The Nevada Voice since 2015.