The stated intention was noble – identify impoverished areas and give wealthy investors tax incentives to load up on real estate holdings and business ventures that would attract jobs and provide homes for residents.

Opportunity Zones allow investors to place capital gains in Qualified Opportunity Funds (QOFs) within 180 days, and defer taxes on the gains until 2026.  Gains from investments held in the QOFs for more than 10 years are excluded from tax. Ninety percent of the fund’s assets must be in Opportunity Zones.

Some businesses – those designated as so-called ‘sin industries’ by the federal government, such as golf courses, country clubs, massage parlors, race tracks and casinos –  were off limits for the tax break.

Now, savvy investors are finding ways to circumvent the law.

“I have long been concerned that the Opportunity Zone program may permit wealthy investors another opportunity to avoid billions of dollars in taxes without meaningfully benefitting the distressed communities the program was intended to help,” U.S. Sen. Ron Wyden (D-Oregon), Chairman of the Senate Finance Committee, wrote in January to Bill Shopoff, the man spearheading investment in a boutique hotel in an OZ at the south end of the Las Vegas Strip.

Wyden, in his letter to Shopoff and other OZ fund managers, singled out Shopoff’s effort to raise $200 million in equity for construction of the $545 million 525-room Dream Hotel.

Wyden wants to know how many jobs each of Shopoff’s OZ projects will provide, price point information, and how the projects originated.

“This is a project that we would do regardless of whether we were in an OZ,” Shopff gushed during a podcast last year.  “We’re walking distance to the Raiders Stadium. We’re within a mile or two of T-Mobile and all the other entertainment venues in Las Vegas.”

The “luxury lifestyle hotel” will include a spa and a casino, two amenities that are designated as “sin businesses” and prohibited in OZ investments, according to the federal tax code.

“The (Opportunity Zone) investment is not involved in the gaming operations and will merely be the landlord to the gaming component of the project,” Shopoff said in a statement to the Current.

“The project has been approved by Clark County for the gaming component. The lessee/casino operator will still need to complete the license process with the gaming board.”

Shopoff says the “equity raise is progressing according to our schedule,” and groundbreaking is scheduled for the second quarter of this year with a 2024 opening.

The longstanding concern about investments in OZs – that they will ultimately benefit the rich rather than the residents of the impoverished neighborhoods they were intended to revitalize – prompted Wyden to launch an investigation into the tax break.

“Currently, there are no safeguards or transparency measures in place to ensure taxpayers are not simply subsidizing high-end real estate investments by billionaires without demonstrating the benefit they are providing to low income-communities they claim to help,” Wyden wrote earlier this year in letters to Shopoff and several other OZ fund managers, following the release of a Government Accounting Office report that revealed OZ investments in upscale ventures.

“Among the investments that have reportedly qualified for these generous tax breaks are projects that include luxury apartment buildings and hotels, high-end office towers, self-storage facilities and a ‘superyacht marina,’” wrote Wyden, who previously introduced legislation aimed at requiring funds to report annually to the IRS and provide information to the public.

“The GAO report Senator Wyden referenced in his letter was a major step in evaluating Opportunity Zones, and Senator Cortez Masto will continue to analyze this non-partisan government report to ensure specific projects, like those in Nevada, truly benefit Nevada communities,” a spokesperson for Cortez Masto said via email.

While the bulk of OZ investment is in real estate, according to experts, the influx is doing little to ease America’s affordable housing crisis, especially in western states such as Nevada.

When two developers wanted to build luxury apartment complexes in downtown Las Vegas, the  city sweetened the deal with deep discounts on its land in Symphony Park, designated in 2018 by then-Gov. Brian Sandoval as one of 61 OZs in Nevada.

Today, a one-bedroom apartment just under 800 square feet at Auric rents for $1,824 a month, while a comparably-sized unit at Parc Haven goes for $1,750.

A third city partnership with Cantor Fitzgerald, Silverstein Properties, and TRU Development Company may offer a more modest rent when Apex @Meadows opens. The five-story multi-family apartment complex is in an OZ on Meadows Lane near Decatur. The city’s redevelopment agency contributed $95,000 to assist with the sewer line.

OZ investment in affordable housing exists in the U.S., but it’s rare, and difficult to track given the lack of reporting requirements in the law.

“I’m not aware of any Opportunity Zone funding that has been utilized in affordable housing around the state,” says Christine Hess, Executive Director of the Nevada Housing Coalition.

“Affordable housing projects are very complicated and that could be one of the barriers even to attracting Opportunities Zone investments and capital gains benefits that come with that funding. Projects that have income restrictions associated with them are already pretty complex deals to finance.”

In Reno, where the median price of a home sold in February was $559,000, up more than 24 percent from a year ago, the city offered developers deferred payment of sewer and permit fees in an effort to spur housing construction.

All of the homes approved for the ‘1000 Homes in 120 Days” initiative were constructed in downtown OZs. The city is unaware how many developers took advantage of the OZ tax break, according to Jeff Limpert of Reno’s Office of Economic Development.

Limpert says Reno officials didn’t keep track of how many new homes qualify as affordable, but says he’s aware of one project that will have eight units designated for individuals earning no more than 80 percent of area median income.

Affordability “was not a requirement for the program,” Limpert said. “The belief at the time of implementation was to add as much supply as possible to provide relief to demand.”

More than 6,000 Qualified Opportunity Funds invested about $29 billion nationwide through 2019, the last year of data available from the IRS.

Nevada makes no effort to keep tabs on OZ investments, according to Greg Bortolin of the Governor’s Office of Economic Development.

Clark County, the largest local government entity in the state, also does not track OZs and has no economic development partnerships with investors seeking the tax break, says spokesman Erik Pappa.

Henderson, which has four OZs, partnered with investors on Lifeguard Arena, an ice hockey facility on Water Street.

“The city contributed about $15 million toward the total project cost in a 50/50 split with our partner, the Golden Knights organization,” Henderson spokeswoman Kathleen Richards said via email. “The city owns the building and the Golden Knights have a 20-year lease agreement.”

Allegiant Stadium, home of the Las Vegas Raiders, is located in one of the most lucrative OZs in Southern Nevada, according to experts.

Perhaps the most infamous use of opportunity zone designation received national media attention, including investigations by the Washington Post and the New York Times, when then-U.S. Sen. Dean Heller applied pressure to Sandoval to designate the Tahoe Reno Industrial Center in Storey County, which enjoys a median income well above the standards spelled out in the law.

“The successful campaign to win this lucrative designation illustrates how political pressure can redirect billions of dollars in federal benefits, which are supposed to be distributed in a non-arbitrary manner,” the Post wrote.

The lack of affordability requirements in qualified OZ projects is chief among criticisms of the tax break.

“The statute did not require reporting of the number of housing units created nor require an income limitation on the eligibility to rent units created. Neither did it specify the number of jobs to be created nor the employment to be generated for residents of the zone,” Kenneth Weissenberg of the Eisner Advisory Group in New York said this week.

Even the IRS admits it’s in the dark when it comes to OZ investments.

The agency says its data is incomplete and its plans to ensure compliance among OZ investors “depend on data that are not readily available for analysis,” according to the GAO report.

“In addition, funds have attracted investments from high-wealth individuals, and some funds are organized as partnerships with hundreds of investors,” says the GAO. Both groups are considered “high risk for tax noncompliance generally.”

The IRS, uncertain of the risk OZ investors pose to the tax system, says it may be at a loss to police them. 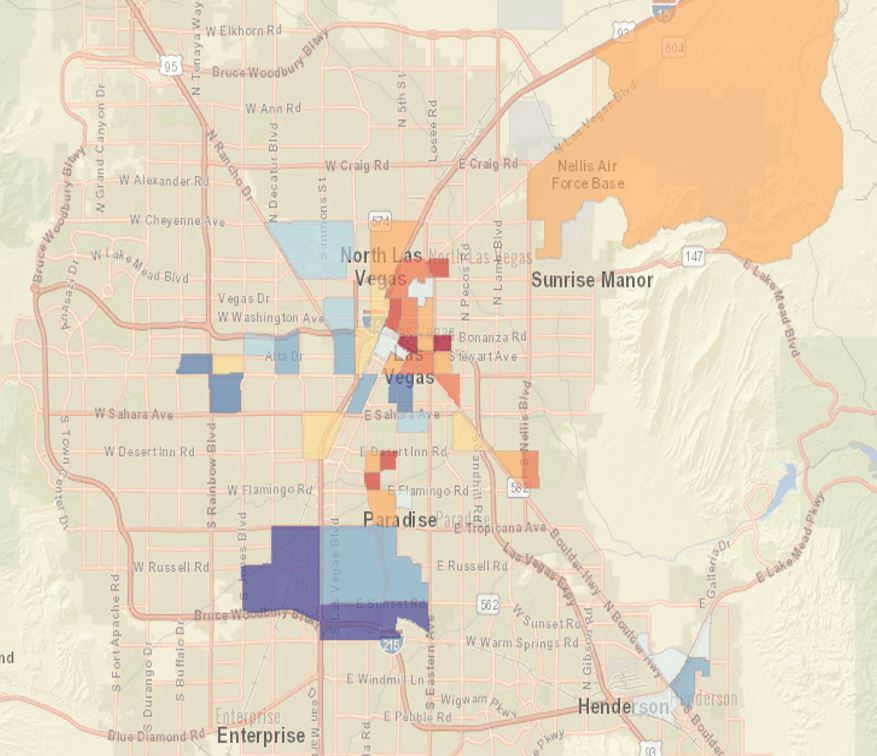 The purple areas were rated the most desirable zones for investors by DevelopAdvisors.com, an advisory firm for opportunity zone investors. (Map courtesy of Develop LLC) 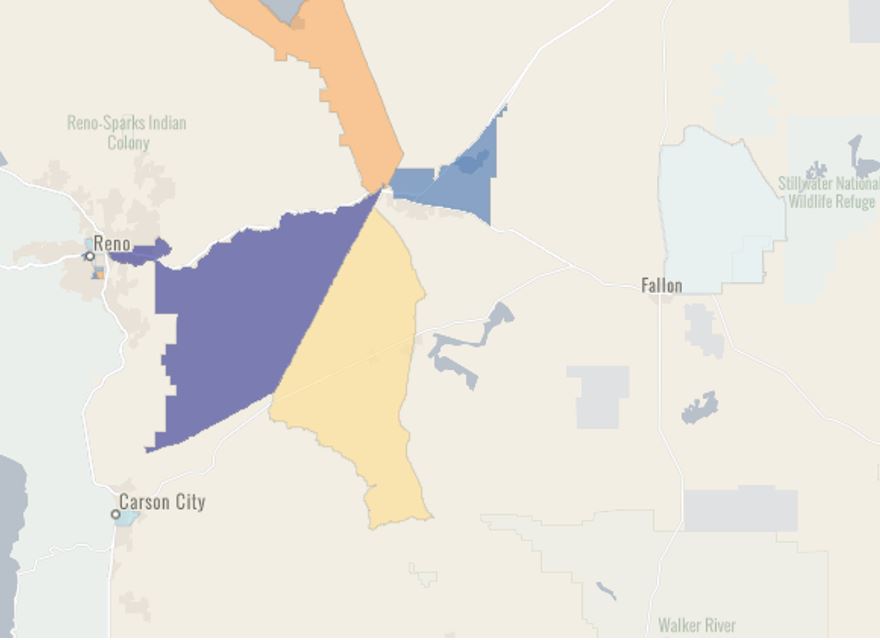 The purple areas, which include the Reno-Tahoe Industrial Complex, were rated the most desirable zones for investors by DevelopAdvisors.com, an advisory firm for opportunity zone investors. (Map courtesy of Develop LLC)

Race for lieutenant governor features primaries on both… by Jeniffer Solis May 16, 2022
‘Sitting on a time bomb’: Mobile home residents at risk in… by Ariana Figueroa April 12, 2022
Board of Regents races in Clark County bring both newcomers… by April Corbin Girnus May 24, 2022