The number of eligible people released from Nevada prisons declined during the pandemic and deaths among those incarcerated were high compared to other states, according to a new analysis from the Crime and Justice Institute.

The recent findings sparked reactions from civil rights groups, who say the new report repeats calls they have been making since the start of the pandemic.

“Seeing it in a report in real time that the release rate went down during the height of the pandemic, we are struck with the question of why, when it should be the opposite,” said Holly Welborn, the policy director for the ACLU of Nevada.

At the behest of Gov. Steve Sisolak and other state officials, the organization was asked to look at how the pandemic affected the criminal justice system.

CJI found that Nevada ranked 21st in Covid transmission rates but “the prison system had the third-highest rate of deaths among incarcerated populations across 45 states.” 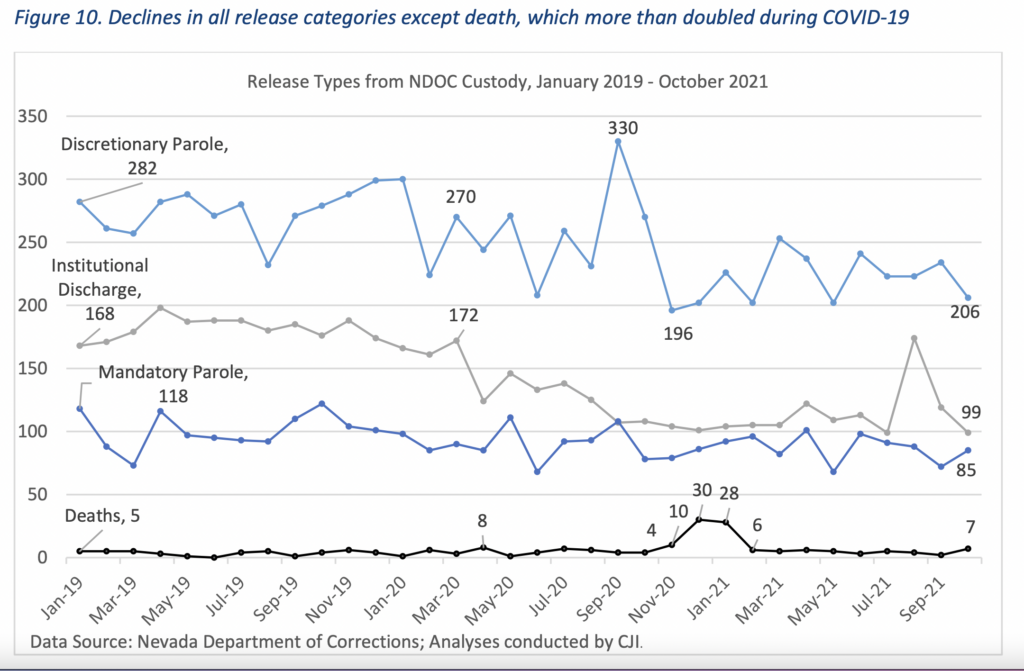 The report notes that Nevada focused on restrictive measures, such as suspending visitations, to control the spread of Covid rather than safely releasing certain eligible inmates, a move other states deployed.

The number of people released through institutional discharges, which accounts for almost a third of all releases and includes people whose sentences have expired, dropped 30% in 2020 and then another 9% in 2021.

In an email, Meghin Delaney, a spokeswoman for the governor, declined to answer specific questions on the report’s findings and policy recommendations.

“The Governor appreciates the dedication of all those who work in the Nevada Department of Corrections and who have continued to provide care for those in their care,” she said. “The Governor made decisions by taking in the nuances and totalities of every situation, consulting with advisors and public health experts. None of the decisions were easy and the Governor focused on protecting lives and livelihoods with his actions.”

Return Strong, a prisoner advocacy group, released its own report last October which included stories collected from inmates and that scrutinized the prisons system’s use of lockdowns and how inmates accessed medical care.

The organization also called for an investigation into NDOC’s handling of the pandemic around the same time.

Jodi Hocking, the group’s founder, said their recommendations overlap with what CJI released along with other reports that have come out over the last two years.

“Nobody wants to listen to us because they think incarcerated people are liars and we’re a bunch of dramatic prison wives,” she said. “The reality is, what we’re saying is factual and everything we’ve said has lined up with every single report by what they consider a neutral third party. So when is somebody going to do something about it?”

Welborn said she is going to push to have the report heard by the interim legislative judiciary committee, a joint committee composed of members of the Senate and Assembly.

“I don’t at this point trust that we can rely on the executive branch or the Board of Prison Commissioners to act on this,” she said. “I don’t think we are going to make headway anywhere else except through a legislative act that creates something like an oversight board or changes to administrative procedures or something that provides that high level of accountability.”

This isn’t the first time Nevada has relied on the CJI. In 2018, the organization was asked to examine the significant growth in incarceration rates, which ultimately led to lawmakers adopting and passing criminal justice overhaul legislation in 2019.

”Confirms everything we have predicted”

Of the 12 recommendations issued by the Crime and Justice Institute, one was that Nevada should “use statewide administrative orders to reduce prisons and jail density when public health crises unduly jeopardize the health and safety of corrections staff and incarcerated individuals.”

“We are now two years into this and every recommendation says decarceration is the best practice, yet we can’t even have that discussion in Nevada,” Hocking said. “The governor won’t talk about it. NDOC says it’s not their job to decide that.”

Since March 2020, civil rights groups along with private attorneys have called on Sisolak to release people serving terms for nonviolent offenses who are six months within their release date as a way to mitigate the spread of Covid.

Groups feared inaction could lead to a high number of deaths.

Even as Return Strong warned of an outbreak at Warm Springs Correctional Center days before a drastic spike in Covid cases, calls for state action went unanswered.

“We have been saying this from the beginning and been accused of having an agenda,” Welborn said. “What we’re talking about is a public health crisis in institutions where the disease is going to spread and it’s going to harm the community at large. This report confirms everything we have predicted.”

In addition to the decline of people being released after their sentence ends, the report points to other mechanisms for release, such as medical release, discretionary parole, mandatory parole, geriatric parole and residential confinement as “tools being available to decrease the number of individuals in prison.”

One of the provisions of the criminal justice overhaul bill that passed in 2019 allowed the early release of nonviolent inmates older than 65 who served the majority of their sentence.

Ahead of its July 2020 effective date, the Nevada Sentencing Commission voted in April 2020 to recommend, not mandate, that the state consider implementing this provision early, which would have applied to six inmates.

“Geriatric parole was a new option for the Parole Board that went into effect in July 2020, yet the data showed zero hearings related to geriatric parole over the year following its effective date,” the report says.

While the analysis indicated that fewer people were sentenced to prisons, people incarcerated stayed an average of one month longer.

“Though the reason for the increased lengths of stay is not known, it could be caused by a combination of factors, including fewer monthly parole release hearings during COVID-19 and through 2021, an NDOC population with more serious convictions, and the inability to earn credits through programming or work placements.”

Those incarcerated can normally earn “good time” credits for working or taking part in educational and rehabilitation programs that would reduce sentences by at least five days for each month they participate in the program or work.

Lawmakers passed a bill in the 2021 session in an attempt to restore those credits.

During the bill hearing, Return Strong also warned issues with credits were leading to prolonged sentences.

NDOC’s handling of suspending visitation has been a point of contention among families and friends of the incarcerated.

The report noted in the absence of visitation, prisons allowed two free phone calls per week.

“However, interviews revealed that there was high demand for the phones, often making them unavailable, and that call times were scheduled during unusual hours, often in the middle of the night,” the report writes. “This lack of connection to the outside is significant, as research shows that pro-social behavior achieved through programming or existing relationships is an important element of recidivism reduction.”

Welborn said the analysis is consistent with what they’ve been hearing and been warning about throughout the pandemic.

“That and the lack of visitation and delays in people who are incarcerated to touch base with their counsel are all related to the odd scheduling of phone calls,” she said. “It was a huge challenge for attorneys and families to communicate with their loved ones across the board.”

Groups have also been calling for an independent entity to provide oversight and accountability.

Nevada’s current system to review corrections policies and regulations is the Board of Prison Commissioners, which consists of Sisolak, Attorney General Aaron Ford and Secretary of State Barbara Cegasvke.

However, CJI says in other cities and states there are boards independent of the executive branch. It recommends Nevada create a new oversight body for the justice system that could consist of those impacted by the system, advocates and state leaders.

The report also calls for NDOC to have a greater level of transparency around how it responded to the crisis.

“While Nevada does have many reporting requirements for NDOC, none of them require sharing of information relating to their response to the pandemic,” the report states. “The need for information was further exacerbated by the limited access outsiders had to the prisons, particularly family members of individuals in custody.”

CJI also suggests creating a weekly or monthly newsletter for those incarcerated to update them on the status of the pandemic.

“It’s a little frustrating because at what point is someone going to hold (NDOC) accountable or provide oversight,” Hocking said. “A lot of people are interested and paying attention now, which is an improvement. But it doesn’t actually change anything.”

Aside from providing an insight to prisons and jails response, the report also looked at how Covid affected arrests and sentencings.

Prior to the Covid, 45% of drug dispositions in the Eighth Judicial District Court were sentenced to probation. That increased to 58% during the pandemic.

Another recommendation is for law enforcement to prioritize resources for “people who commit serious crimes, by continuing to reduce custodial arrests, admissions, and filings for lower-level conduct and considering diversion for those with behavioral health needs.”