We missed our chance to pay attention to our children

The pandemic gave education leaders the opportunity to truly reimagine what it is to teach the whole child. But no. (iStock/Getty Images)

In early 2021, when Supt. Jesus Jara announced, without consulting principals, that all students would be going back to school in a hybrid model, many teachers and building leaders let it be known that “business as usual” wasn’t going to cut it.

Whenever a traumatic event happens in a school, they pointed out, leaders bring psychologists and social workers into the school to help students process.

We were in the middle of a pandemic, and everybody was traumatized. Bringing kids in and administering tests and focusing on canned curriculum wasn’t the way to help kids process what they and their families were going through.

Teachers needed the opportunity to assess where their students were at, both academically and socially, since they left school on Friday, March 13, 2020.

A year later, teachers – who had worked double and triple duty trying to learn new methods of teaching and connecting with their students during the pandemic – were not happy with the hybrid model, which Jara had told Trustees wasn’t going to happen just days before his announcement that it was.

Now, we are facing the kind of anger and violence that we have never seen before at CCSD. The pandemic is not the only reason so many students are angry, and so many teachers are burned out. Social media and the rise of white nationalism is playing a part. So is hopelessness. We live in a country in which people are more likely to dehumanize someone to make a political point. And to riff off of Mark Twain, these days a lie gets around the world millions of times before truth can even think of the word “shoes.”

Brigid Duffy, the director of the juvenile division for the Clark County District Attorney, notes that the dust-up that led to CCSD Police shooting at a car of students at Western High School March 29, started as an online dispute. The people in the car were students at another high school, and then drove to Western to confront the people who had said something mean to them on social media. Notwithstanding the wisdom of the police shooting at the car, or if the car was gunning to hit people – the car wouldn’t have been there if it weren’t for social media.

Hillary Davis – who has been doing some great work on school violence for the Sun – reported that the Jan. 24 melee at Canyon Springs started when one kid called another kid a racial slur.

One of the lessons so many kids are learning from their parents is that it doesn’t matter how hard they work, nothing will ever get better for them. They saw their hard-working parents get thrown to the curb without health insurance or any sort of income, while executives got to keep their salaries. They feared losing their houses or had to move because an overworked and chronically underfunded state unemployment agency couldn’t keep up with demand.

And let’s be clear here: social safety net agencies are chronically underfunded because of the Reagan and post-Reagan era philosophy that government help makes you weak. In this case – I will argue in many cases – being hung out to dry by people making bad decisions at the top of the economic ladder made people even more hopeless and angry. And that includes kids.

“Kids are aware that doing well in school no longer has any guarantee of success,” wrote Sebastian Pepperell, who left his CCSD high school teaching job this past fall. “So why should they bother? You are lying to students if you try to life coach them into doing well in school so that they can get a 3bd/2br.”

Teacher Alexis Salt has been sounding this alarm for a while. She put the word “nihilism” back in my vocabulary. Recently, she told me, she caught a kid smoking and asked him, “Why would you do that? The answer was essentially, it doesn’t matter, the world is going to blow up anyway.”

I looked up the data on the Nevada Accountability Portal for student-on-student and student-on-teacher violence for the last 12 years. And some interesting storylines emerge.

In 2008, as the economy was crashing, violence among students was up. Again, decisions were made by supply-side financial whizzes that hurt people on the ground. Wall Street was bailed out. Regular people lost their houses. Then the number of violent incidents went down as Vegas started to recover economically. The opposite is true for violence against teachers – that went up 2011-2014.

But look what happens to discipline statistics starting in 2015. Kids are fighting a lot more, and they’re attacking their teachers a great deal more.

Gee, I wonder what happened in 2015 that gave angry people permission to use racial slurs and physically attack people they disagree with?

Too bad I don’t have statistics on how well the tiki torch industry did after 2015. 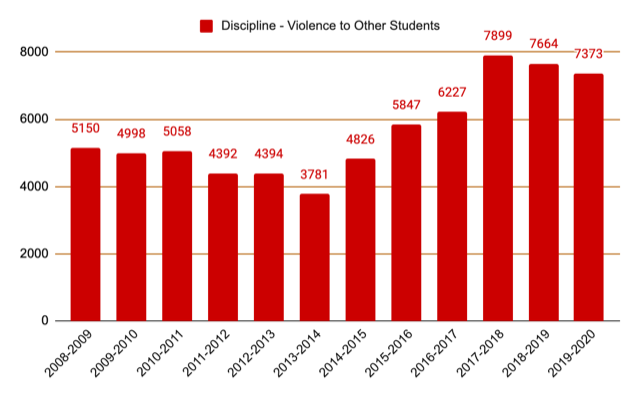 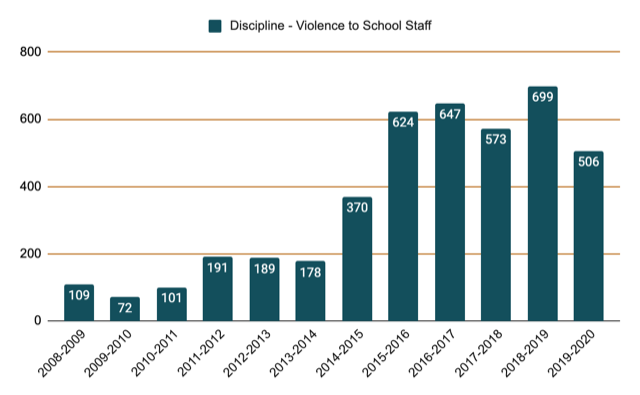 The Internet is for…

“That is a scary thing in the hands of hormonal teenage boys,” Duffy says. And, she notes, “the incidents of sexual assault [for this school year] were very shocking to me.” When I talked to Duffy a month ago, there were 66 sexual assaults, which she indicated was about three times normal. Note that in CCSD juvenile justice parlance, “sex assault requires penetration with force,” Duffy says. “That is a staggering number of sex assaults on our campuses.”

This number, of course, was before the Eldorado teacher was sexually assaulted.

“According to the girls who turned it into me, it was pretty hardcore stuff,” Salt says.

“The misogyny is really really difficult to deal with,” Salt adds, noting that she hears about it all the time from her female students. She’s stopped wearing dresses because she got word that male students were saying “somebody needed to pull my dress up, teach me a lesson.”

So, when she gets boys in her classes challenging whether she is old enough or experienced enough to teach AP classes – she’s been teaching for 15 years – she sloughs it off. What may have been a minor challenge to authority 10 years ago is now less worth the effort in the larger misogyny she has to deal with.

“I see a direct connection between this hyper-masculine behavior in our culture and assaults on teachers,” Salt says.

And this is where the disconnect happened. Instead of addressing these issues head-on – instead of looking out for the 3rd grader who is non-verbal because of what she went through during the pandemic, or the first graders who still aren’t potty trained, or the high school kid who is spiraling into ever higher anger in chat rooms with violent rhetoric… instead of looking out for the teachers who have agoraphobia after being cooped up for a year and a half, or the teachers who lost their houses because of soaring rents and low pay, or the teachers with unpaid medical bills… Supt. Jara – rubber-stamped by his yes-person, Trustee Lola Brooks – sent people back to school as if it was pre-pandemic. But, as the statistics show, kids and teachers weren’t doing well pre-pandemic. Certainly, post-pandemic, we needed a different approach.

It makes me sad, because the pandemic gave education leaders the opportunity to truly reimagine what it is to teach the whole child. They had the opportunity to use this once-in-a-lifetime event to help kids understand the value of resilience and what’s important about their own lives. To help them find hope. But no. At the beginning of each year, teachers still have to watch the same video they watch every year about how to make sure kids don’t cheat on standardized tests. And kids still have to take the tests. Which don’t match with their life experiences, and increasingly don’t even help kids get into college.

Our world is broken. Our school system is broken. There are leaders here in Clark County who can help change that. Jesus Jara isn’t one of them.

“We’re all kind of collectively being bullied,” says Salt. “And the biggest bully of all is the guy who runs our district.”

We missed our chance to pay attention to our children

Broadcast, digital and print journalist Carrie Kaufman writes the You're Overthinking It newsletter on Substack. She has covered the Clark County School District for public radio and The Nevada Voice since 2015.