For CCEA, Democrats are bad because they’re Republicans, but Republicans are good

The nastiness has begun. Just days after heralding in the merry month of May, and the last cool days we in Southern Nevada will experience for the next four months, voters started getting flyers in their mailboxes.

Sent by a group called Strategic Horizons. Which is related to and fully funded by the Clark County Education Association.

The flyers are the worst kind of deceitful word manipulation. And they are only directed at the two people running for the Legislature who work for the Nevada State Education Association – which the saintly* CCEA executive director John Vellardita sees as an organization forged from the fires of Hades.

Deceit is what Strategic Horizons, which happens to be located in the very same suite of offices as CCEA, does with these flyers targeting Brian Lee in Washoe County and Lisa Guzman in Clark.

For example, look at a flyer sent out against Lee. 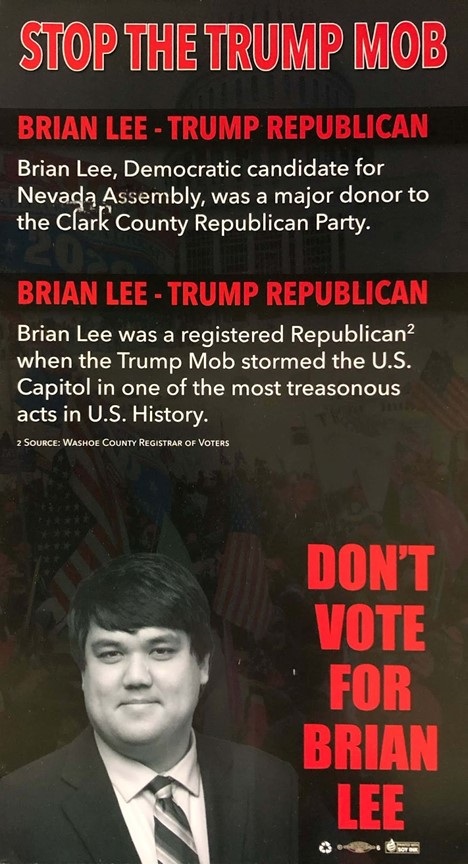 Let’s parse this out, shall we?

Lee is the executive director of a teachers union. He was the president of Battle Born Progress, which is part of the Reid Machine. He worked pro-bono as an immigration attorney to fight Trump’s anti-immigrant policies. He says he was an early supporter, and donor, to the Hillary Clinton campaign.

“I’m a progressive. I’ve always been a progressive,” Lee told me from his office in Reno. “That I’m a Trump Republican is a damn lie.”

Lee says he bought a table “for Republican members of my union” at the Lincoln Day Dinner at the 2015 Clark County Republican Convention. His members were part of the Log Cabin Republicans, and they were terrified of Trump. In order to purchase the table, he says he had to be a registered Republican, so he switched parties to try to get Trump defeated in the primary.

“You can’t achieve any progressive goals in this state unless you have moderate Republicans on the other side,” Lee told me. “I changed my party to help my members fight for their party.”

Let’s look at the most egregious attempt to mis-use words in this piece: that Lee “was a registered Republican when Trump stormed the U.S. Capitol.” Lee says that’s a lie, too, that he changed his party affiliation back in 2020, so he could vote in the Democratic primaries.

But even if it wasn’t a lie… even if Lee had still been registered as a Republican on January 6, 2021, how does that translate to the innuendo in this ad that he supported the insurrection?

I’m pretty sure former conservative shock-jock turned anti-Trumper Charlie Sykes is still a Republican. I can’t think of anyone who abhors Trump and has condemned the insurrection as much as he has. 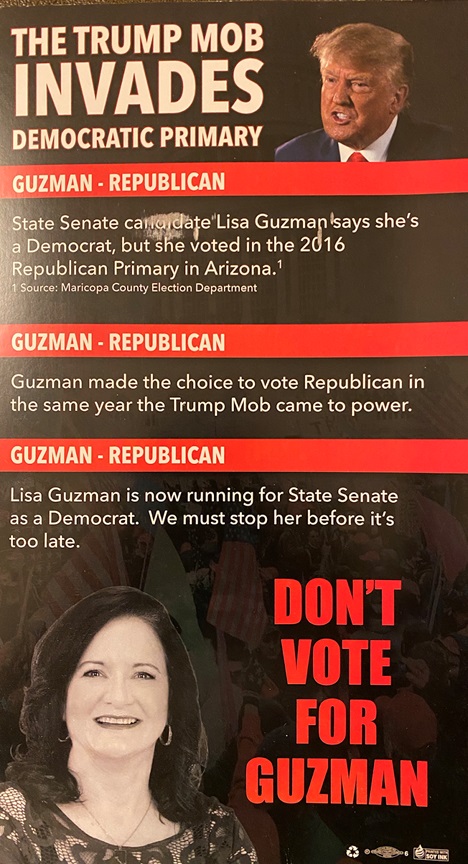 Guzman told me she did vote in the Arizona Republican primary in 2016 – to support the gubernatorial campaign of her former Congressman, whom she had known prior.

He lost the primary. She voted in Nevada in the general election, supporting and volunteering for Hillary Clinton.

But she voted Republican in a 2016 primary. And CCEA wants you to believe she therefore supported Trump. That’s incredibly specious. It’s also vicious.

Of course, CCEA actually does support Trump Republicans. They have endorsed Jeff Stone, a former California Republican who actually worked in the Trump administration.

Stone is running in Republican Keith Pickard’s old district, SD20, in Henderson. Pickard was endorsed by CCEA in 2018 and ended up defeating Democrat Julie Pazina by 24 votes.

Stone is exactly what CCEA falsely accuses Brian Lee of being: A Californian who is a Trump Republican.

But people who are working for Strategic Horizons or CCEA are not going to constituent doors and saying to folks in Henderson, “Jeff Stone doesn’t belong here. Tell him to go back where he came from.” Which is exactly what one of Lee’s constituents told me was said to him at his door. 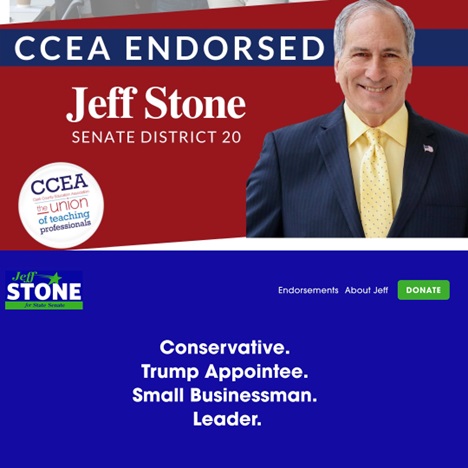 Lee is also from California originally. He’s been in Nevada since 2015 – far longer than Stone. But Lee’s mother is an immigrant from Korea. So “tell him to go back to where he came from” has a different meaning. And CCEA knows that.

CCEA is also endorsing Republican Bert Gurr for Assembly district 33 in Elko County. Gurr is for school choice, and is anti-mask.

And CCEA is endorsing Republican Heidi Kasama for Assembly. Kasama is against raising the minimum wage. Yes, a union is endorsing a politician who wants to pay workers less.

Of course, by sending out the vicious ads against Lee and Guzman under the name “Strategic Horizons,” and sending out the positive Republican endorsements under “CCEA,” the teachers’ union wants voters to think they’re not affiliated. They are two arms of the same organization.

Democrats are OK with this

Pazina is running again, this time in the new Senate District 12, and her primary opponent is Guzman.

When these flyers hit my mailbox, I called Pazina to see if she would disavow the dirty politics. She didn’t answer. Instead, I got a call from Greg Lademann, the executive director of the state Senate Democratic Caucus.

Lademann, I was surprised to hear, seemed to be acting on behalf of one candidate in a primary over another candidate in his caucus’ primary. And he refused to disavow Strategic Horizons/CCEA’s specious mailers.

“This is something CCEA is doing,” Lademann said. “Because Julie’s campaign isn’t putting anything out… it’s not Julie’s mailer, she’s not going to say anything.”

Angie Taylor, who is running against Lee in District 27, and is the current president of the Washoe County School Board, said “I don’t like attack advertising. I don’t like negative advertising.”

Taylor noted she was the target of a recall from far-right extremists who misrepresented her views, and she doesn’t condone that in this assembly race.

For the record, if someone lied about Lola Brooks, and that lie would benefit me, I would disavow the lie. Because that’s what ethical people do. Winning dirty is not winning. That neither Pazina nor Taylor would call out these disgusting flyers and racist push polls is probably the most depressing part of this story.

*See how you can use words to say something exactly opposite of what you mean?

Note: This column was updated to include comments from Angie Taylor.

For CCEA, Democrats are bad because they’re Republicans, but Republicans are good

Broadcast, digital and print journalist Carrie Kaufman writes the You're Overthinking It newsletter on Substack. She has covered the Clark County School District for public radio and The Nevada Voice since 2015.

How the child tax credit became a lifeline for Nevadans: 'It… by Michael Lyle December 27, 2021
Little housing stock, high rents in Nevada create a homeless… by Michael Lyle October 11, 2021
Adam Laxalt, Trumpism and the Big Lie: A chronology by April Corbin Girnus November 8, 2021