A month into 988, call volumes up, but state behavioral health infrastructure isn’t

Nevada’s challenges are unique in that unlike some other parts of the country, the state is entering the program without coordinated behavioral health services in place beforehand. (Image by StockSnap from Pixabay)

A month ago, on July 16, the nation and Nevada launched 988, the new three-digit number for the National Suicide Prevention Lifeline, connecting people in emotional distress to 24-hour, 7-day-a-week free and confidential support.

It was step one in creating the nation’s first comprehensive crisis behavioral health care system based on having someone to call, someone to come and somewhere to go. 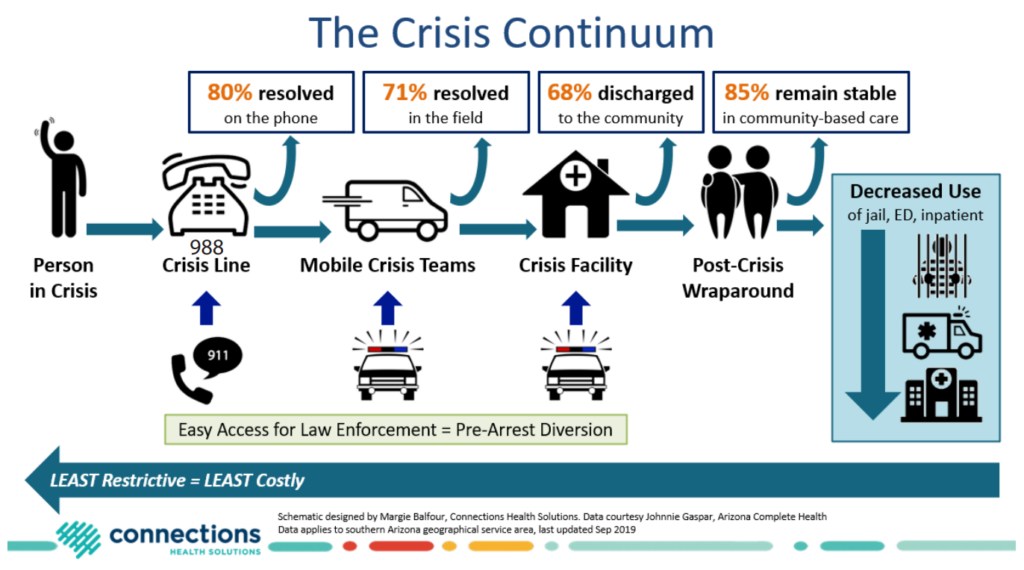 Some of Nevada’s challenges in the launch process are the same as those faced nationally.  For instance, callers might be waiting 45 seconds before being routed through the national intake to a live person providing local assistance. States are also combating online misinformation on how law enforcement is involved.

But Nevada’s challenges are also unique in that unlike some other parts of the country, the state is entering the program without coordinated behavioral health services in place beforehand.

Building the rest of the infrastructure for 988 could take years. The state needs to coordinate and train mobile crisis teams, build crisis stabilization centers and craft regulations on how telecommunications companies will implement the small surcharge authorized in state law to fund the new 988 system, all while at the same time trying to help Nevadans in crisis now.

“I think the biggest challenge we are all aware of is that while we are planning and working towards implementation, we also want to make sure that individuals in crisis today also have access to those services today,” said Stephanie Woodard, senior advisory on behavioral health for the Nevada Department of Health and Human Services.

Nevada’s needs are immediate. It continuously ranks at the bottom of all states in access to care and higher prevalence of mental illness, according to the nonprofit Mental Health America’s annual rankings.

Recent data was unavailable, but in 2020 nearly 24,000 people in Nevada called the National Suicide Prevention Lifeline, according to the federal Substance Abuse and Mental Health Services Administration.

In the first two weeks after the state launched the new number on July 16, nonprofit Crisis Support Services of Nevada, a National Suicide Prevention Lifeline partner that operated the state’s suicide hotline since 1966, estimates calls increased by 30%. Crisis Support Services also still fields calls from the suicide hotline number, which remains active, so increased call volume suggests the public rollout of the 988 number in July resonated effectively with the public.

The nonprofit increased staffing by 35 people, including three who are bilingual, in the last three months to prepare for the increase in calls, said Rachelle Pellissier, executive director of Crisis Support Services of Nevada.

The goal for Crisis Support Services is to have a 95% call answer time in 20 seconds, she said.

The answer time in Nevada has been averaging between 14-20 seconds, but those in crisis are routed to the national hub where the intake is roughly 45 seconds before they are redirected to either their state (based on area code) or to the Veterans hotline. It takes about a minute from the time a person in emotional distress calls 988 until they are connected to someone in Nevada.

“They need to shorten that because people in a crisis, they’re hanging up if it’s too long,” Pellissier said.

Last year, the Legislature passed Senate Bill 390 authorizing  at most a 35-cent charge per person, per line, per month in Nevada to fund the 988 system. But the state is still working with telecommunication companies to develop the regulations to implement the surcharge. Ideally, the regulations will be presented to the Nevada Board of Health by December, said Woodard.

These problems exist at the same time as a slew of other issues arise when it comes to building the physical infrastructure to have a coordinated state-wide crisis response effort, including training and onboarding mobile crisis teams and creating the physical locations for the crisis facilities.

While Nevada has some mobile crisis teams in operations, the state is working on crafting provider qualifications, and then must select from a handful of providers that have applied for the funding, before launching designated crisis mobile teams, said Woodard.

The state received a grant through The American Rescue Plan Act of 2021 (ARPA) and is working with applicant organizations on setting the standards for operating the centers, while also waiting for Medicaid (the single largest payer of mental healthcare in America) to craft a reimbursement policy for those centers, said Woodard.

Woodard anticipates some of the centers will open in the next year to year and a half.

As all of this unfolds through bureaucratic mazes, false information swirls in the public domain — including that 988 shares a person’s location with law enforcement. 988 does not use geolocation and instead relies on area codes to route calls to local centers.

For decades, law enforcement has been the de facto first responder to immediate mental health crises in America,  often with deadly results.. This reliance helped establish the stigma that mental illness relates to criminalization in the collective consciousness, said Pellissier.

To find mental and behavioral health services in Nevada, visit:behavioralhealthvn.org.

988 was designed to shift away from relying on law enforcement and create a separate system for people to get behavioral health care from trained professionals. But it will take years to build out, she said.

In the meantime, the only time law enforcement is called is when the individual is at risk of harm or death — and only because there are so few other options available. As the state and the nation work to build a system of care tailored to behavioral health, 988 call centers like Crisis Support Services of Nevada have to work to build trust in people’s most vulnerable times of need.

The only way they can do that is by being there when someone calls, Pellissier said.

“988 is just the phone number. That was just the first step in the behavioral health care system, just make it easy to call,” she said. “This is the beautiful first step, yes it makes it easier for people to get to us but we still have to build these other services and it’s not going to happen overnight.”

A month into 988, call volumes up, but state behavioral health infrastructure isn’t

An award-winning, investigative and enterprise reporter, Camalot Todd has over seven years experience in print, digital, radio and TV journalism. She covered mental and behavioral health in New York for Spectrum News 1 Buffalo through the national service program, Report For America, where she won the Mental Health Advocates of WNY Advocacy Award in 2020 for her coverage on mental health stigma. She also served as an inaugural member of the Report For America Corps Advisory Board Member, 2021-2022. Previously, she reported on community issues in Las Vegas, including a long-term project on underage sex trafficking, for the Las Vegas Sun and its sister publication, Las Vegas Weekly. For the Sun, she wrote a pathbreaking investigative piece called, “Children on the Cusp: The transition from foster care to adulthood is leaving some behind.” The piece won the Nevada Press Association best investigative story of the year and named Camalot the Best Community Reporter of 2017. She also worked as a reporter for KUNV radio and is a graduate of University of Nevada, Las Vegas. Camalot was selected for National Press Foundation Opioid and Addiction Fellow 2021 and led the Syracuse Press Club's Journalism Lab as an educator from 2021-2022.