With the win in a special election in August, Mary Peltola became the first woman to represent Alaska in the House, the first Alaska Native to serve in Congress, and the first Democrat to win a House race in Alaska in 50 years. (Photo by James Brooks/Alaska Beacon)

As Nevadans contemplate Question 3 on November’s General Election ballot, it might do them well to look to the last frontier.

Alaskans in 2020 narrowly passed (50.55% in favor) a ballot measure to implement a ranked choice voting system similar to the one being proposed to Nevadans. Alaska isn’t the first to implement ranked choice voting statewide – that would be Maine, which did it in 2016 – but the western state has a libertarian streak that might ring familiar to Nevadans.

And a look at Alaska’s recent special general election for a vacant House seat may provide some insight into how the system might work here in Nevada.

Question 3 proposes replacing Nevada’s existing voting system for federal, state administrative and state legislative races with a new election system that combines open primaries and ranked choice voting. The proposal requires a change to the Nevada Constitution, which means the ballot measure will need to be approved by voters twice. First this year. Then again in 2024.

Proponents of Question 3 argue that Nevada’s current system disenfranchises voters, particularly the growing number of people who are registered as nonpartisans. They point out that, while voters can temporarily switch to a party to vote in a primary, many don’t want to out of principle, and others might lean toward one party generally but have an affinity for a particular candidate of the other party and want to support them during a primary.

Here’s how the proposed system would work: All candidates, regardless of their political party, would appear on the primary ballot in June. The top five finishers would move on to appear on the general election ballot in November.

On that general election ballot, voters would rank the five candidates — number one pick, second pick, etc. If one candidate receives more than 50% of first-choice votes, they are declared the winner. If not, the candidate in last place is eliminated, and those votes are transferred to their second-choice candidate. That process is continued until a candidate receives a true majority.

The Institute for Political Innovation, the national nonprofit behind the election reform effort in Nevada and Alaska,  refers to this system as “Final Five” voting.

Voters don’t have to rank all candidates. They can still choose only one. “None of the above” would still be an option. As would simply ignoring the race altogether.

Alaska’s first major test of ranked choice voting was an Aug. 16 special general election to determine who would serve the remaining term for Rep. Don Young, who unexpectedly died in March.

Peltola received 40% of first-choice votes. Palin received 31.3% and Begich 28.5%. That eliminated Begich and his votes were transferred to his supporters’ second-choice candidates. To overcome Peltola’s first-round lead, Palin needed around two-thirds Begich voters to support her. Only half did; 29.3% backed Peltola and 21% selected no second-choice candidate.

The final result: 51.5% of voters pushed Peltola to victory.

Here’s how that looks: 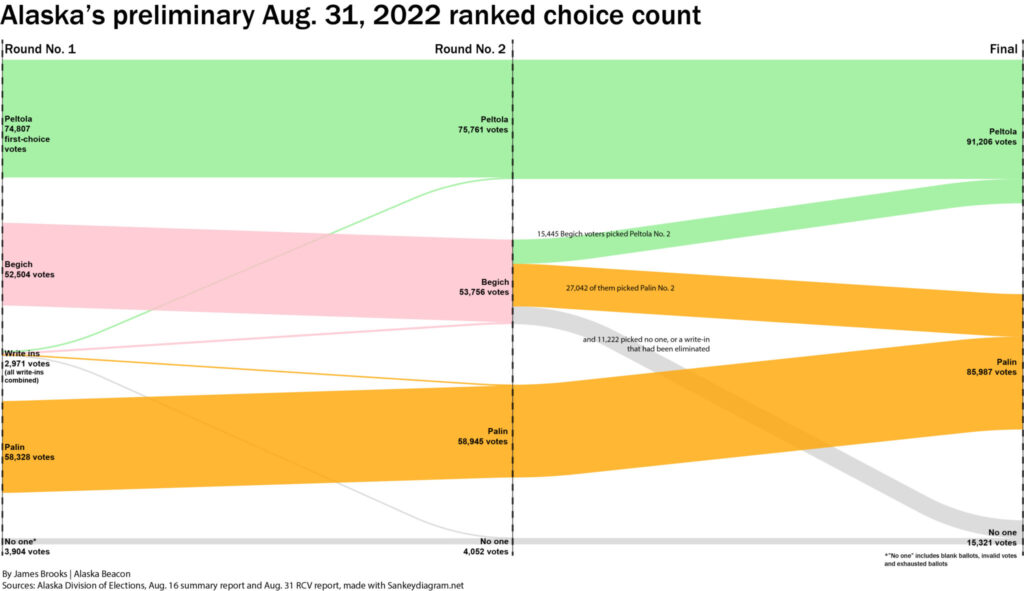 Only 295 ballots – or 0.15% of those cast – during the August special election were unable to be counted for at least one candidate, the Alaska Beacon reported. Opponents of the switch to ranked choice voting have argued the process would be confusing to voters and be a step backwards for voter access.

With the win, Peltola became the first woman to represent Alaska in the House, the first Alaska Native to serve in Congress, and the first Democrat to win a House race in Alaska in 50 years.

It’s an outcome that might not have happened without ranked choice.

“Those two GOP candidates have really attacked each other,” says Glenn Wright, a professor of political science at the University of Alaska Southeast. “To the contrary, Peltola has taken a really moderate line and really made an effort to reach out to Republican voters. (She knew) she couldn’t win a majority just by drawing on Democrats. That has really paid off.”

Peltola is only seated until Young’s term ends, which is this January. So she, Palin and Begich will appear on the Alaska general election ballot running for the same House seat next month.

Wright says Alaska’s gubernatorial race is seeing less mudslinging than in past years. Republican Gov. Mike Dunleavy is facing three challengers – a former governor running as an independent, a Democrat, and a Republican.

“The only way (to win) is cultivating second-choice voters,” he says. “They’ve staked out grounds on which they disagree but in terms of their behavior they have been collegial even as they have attacked the leader in the race.”

Wright says he is curious to see whether collegiality continues over time.

“Candidates and campaign staff are learning how this all works,” he says. “They are learning the rules of campaigning under this system.”

Meanwhile, Palin securing more votes than Begich, who was backed by the official state party, could be seen as a nod that the election reform’s goal to reduce the power of political parties was successful.

The Alaska Republican party has called to repeal the new election system, but state law requires the legislature to wait at least two years before touching a law enacted by direct vote of the people. Wright thinks by then Alaskans will have voted in new lawmakers who benefitted from the new system and become accustomed to the new system, making it harder to repeal.

“Politics in the US has become so poisonous over the past 10, 15 years. For a time it felt like it was limited to Congress and politics in DC. The last few years that bitterness has percolated into local school boards, state politics and cities. I am hopeful that this election reform can bring a little more civility and a little more sensible debate.”

[editor’s note: This story has been updated to correct the party affiliation of one of Alaska Gov. Dunleavy’s challengers.]