In 1985, Neil Postman’s crowning achievement, “Amusing Ourselves To Death,” provided the most prescient analysis and forecast of the current lobotimization of American public discourse.

Postman’s work drew a distinction between the Orwellian vision of a totalitarian government seizing individual rights and Aldous Huxley’s “Brave New World,” where freedom and rights were voluntarily sacrificed in favor of medicated bliss, or Soma, which Postman pointed to as an analogy for infotainment — media packaged as news or information but largely driven by sensationalism, propaganda, and entertainment value.

With its focus on clicks, views, likes, follows, ratings, and commercial feasibility, much audio-visual media does not necessarily involve, much less encourage, honest intellectual engagement or rational argument.

This becomes a danger to society, Postman said, when the conveyance of important information manifests as just another form of entertainment, or worse, propaganda.

Audio-visual media as entertainment alone is not dangerous, he said. But when the stakes are raised, when the direction of the nation is in play, infotainment is actively harmful.

America on the brink

In the 2022 Election, just like the 2020 Election, and, one can easily anticipate, the 2024 Election, enormous historical stakes are in play for the future direction of democracy v. autocratic authoritarianism in America.

The attempted normalization of election denialism is one of the most dangerous and insidious symptoms of America’s Constitutional Republic in democratic free fall.

Nearly 300 Republicans on the ballot in 2022 midterms have disputed the 2020 election results. They make up more than half of all Republicans running for congressional and state offices in the midterm elections.

Four are campaigning to control elections in critical states during 2024. Tucker Carlson is priming his viewers to reject any Democratic wins as illegitimate.

In Ohio, in races for Congress, statewide offices, and seats in the state legislature, Republicans up and down the ballot have alleged voter fraud in 2020. Five Ohio Republicans in the U.S. Congress — Steve Chabot, Warren Davidson, Bob Gibbs, Bill Johnson, and Jim Jordan — voted to object to the 2020 results certification of at least one state.

Jordan, Gibbs, and Johnson, plus Reps. Bob Latta and Brad Wenstrup also signed onto a lawsuit alleging “unconstitutional irregularities involved in the 2020 presidential election” in a brief to the U.S. Supreme Court.

With their backing, Donald Trump’s deranged, narcissistic, violence-provoking attempts to protect his own ego by falsely claiming the 2020 Election was stolen from him have manifested nasty infection; a deep sepsis coursing through the blood of America’s body politic.

Republican candidates across the country are now vowing to reject the valid results of their elections if they lose. Imagine what they will do, based on lies, if they win.

Cultivated by fringe, dark alley corners of the internet, cable news primetime propagandists, political snake oil opportunists, and every sort of sleazeball, slimeball, and dirtball grifter one can conjure, the poison of 2020 election lies has had its intended effect.

America watched its U.S. Capitol get sacked in the Jan. 6 insurrection and the peaceful transition of power interrupted for the first time in our history; and instead of seeing it for the desperate, unhinged, large-scale act of violence and intimidation that it was, a major swath of Americans, fed by a steady diet of bad faith propaganda, are gearing to rip the country from its hinges to try to validate their delusions.

This is what happens when leaders lie to their followers in some of the most reckless ways possible.

Riding the back of the tiger, these politicians dare not let go. And the ones who ought to know better have gone from buckling like a woodshed in a tornado to cheering the tornado on along its path of destruction.

Republican Ohio U.S. Senate candidate J.D. Vance has recently tried to downplay previous rhetoric giving validity to claims the election was stolen by fraud. I suppose it’s up to you which version of J.D. Vance you wish to believe. We did just learn Wednesday Vance will spend election eve rallying with Trump in Dayton.

Earlier this month, Vance told the Columbus Dispatch the election wasn’t free and fair and above board due to social media censorship of a Hunter Biden laptop story.

In October 2021, Vance told the Youngstown Vindicator, “There were certainly people voting illegally on a large-scale basis.” In January 2022, he told Spectrum News, “I mean, look, I think the fundamental problem is we had a massive effort to shift the election by very powerful people in this country.”

More unsettling is his being bankrolled by Peter Thiel, who has been open about his belief that democracy and freedom are incompatible, and Vance’s citations of neo-reactionary right-wing blogger Curtis Yarvin.

In September 2021, J.D. Vance, a GOP candidate for Senate in Ohio, appeared on a conservative podcast to discuss what is to be done with the United States, and his proposals were dramatic. He urged Donald Trump, should he win another term, to “seize the institutions of the left,” fire “every single midlevel bureaucrat” in the US government, “replace them with our people,” and defy the Supreme Court if it tries to stop him.

To the uninitiated, all that might seem stunning. But Vance acknowledged he had an intellectual inspiration. “So there’s this guy, Curtis Yarvin, who has written about some of these things…”

Yarvin, Vox wrote, “stands out among right-wing commentators for being probably the single person who’s spent the most time gaming out how, exactly, the US government could be toppled and replaced — ‘rebooted’ or ‘reset,’ as he likes to say — with a monarch, CEO, or dictator at the helm.”

Yarvin couches his ideas about a late- and post-democratic America in terminology such as “the Cathedral,” representing journalism and academia, and “the Regime,” a right-wing catch-all for any public entity or actor they see as a threat or challenge

According to the Vox reporting, Yarvin openly talks on podcasts about his vision of an American autocrat declaring a state of emergency and taking “direct control over all law enforcement authorities,” federalizing the National Guard, and effectively creating a national police force. He speaks of dismantling academic and media institutions, and firing all career government bureaucrats to be replaced by loyalists.

If all of this sounds sounds like microwave Chef Boyardee authoritarianism preening and posing as important, bold, new thought, you’d be exactly right.

Nevertheless, this ideology, as it always has, stands in direct contrast to all of the basic foundational American principles of self-governance, the Enlightenment, the Age of Reason, and pretty much all of what’s known as Western liberal democracy. And these ideologues’ favorite elegist is hoping in less than two weeks to become Ohio’s next U.S. Senator.

Vanity Fair reports that Vance, in off the record conversations at a neo-reationary convention, holds “a view that we are at an ominous turning point in America’s history. He didn’t want to describe this to me on the record.”

On a podcast that evening, “Vance described two possibilities that many on the New Right imagine — that our system will either fall apart naturally, or that a great leader will assume semi-dictatorial powers.”

For mass public consumption on Twitter and elsewhere, Vance is more subdued, but still making references to “the regime.” 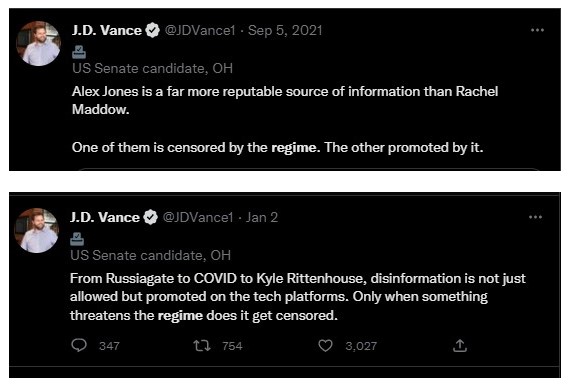 The game of using conspiracy and crank zealot rhetoric to implicitly, if not explicitly, validate it has become common.

Speaking to a right-wing tea party group in Westerville, Ohio Auditor Keith Faber floated a preposterous conspiracy theory about “special paper” being bootlegged out of Cuyahoga County by its elections board to be used for nefarious purposes elsewhere. Faber didn’t bother checking with the elections board in any way before hitting the campaign trail to sell this lunch bag full of dog shite to whoever he clearly sees as gullible enough to buy it.

Ohio Secretary of State Frank LaRose is attempting to be much cuter in his own validations of election denialism crankery. Even though LaRose only referred 75, or 0.001%, of Ohio’s 2020 voters for potential fraud prosecution, he created a Public Integrity division in his office to “investigate and pursue attempts to obstruct, intimidate, or interfere with any elector in registering or voting.”

LaRose isn’t dumb, on either side of the spectrum. He knows, or well should know, the 2020 Election wasn’t stolen. But he also knows that a lot of the folks he’s talking to on the campaign trail are telling him they believe it was.

LaRose isn’t a strong enough man ethically to tell them the truth, so he validates their fears and takes political advantage of them, giving cover to dangerous election denialism and its violent rhetoric while putting his own political career ambitions first.

This is a consummate politician way of handling things: Validate the crank and manipulated fringe base by repackaging functions the office already performs, point to the widely agreed fact that indeed elections must have integrity, and take a victory lap.

What he can not bring himself to do is to clearly call attempts to subvert American democracy with false conspiracy theories what they are: Unpatriotic and anti-American.

LaRose can’t even bring himself to disavow the conspiracy theories, much less acknowledge their ultimate danger. Instead he just walks his line and winks at them.

He expects to get away with it, and he’s probably right.

So do the rest of them who will only say, “Joe Biden is President,” in the present tense, as though that head nod to the denialists isn’t obvious.

They don’t have any fear of being held accountable, and the polls show they largely have nothing to fear.

Statehouse and Congressional unconstitutional gerrymandering is in the bag.

The infotainment is working its magic.

But, as with everything else in life, the only constant is change.

The long lens of history

Decades from now, under who only knows what conditions, we will look back on these years as a very clear inflection point in American history.

And we will remember who told the truth, and who helped propagate the lies. Even if some continue to insist that the facts are the lies, and the lies are the truth.

Orwell will always be right on this one: “The Party told you to reject the evidence of your eyes and ears. It was their final, most essential command.”

So America, we are primed and poised to eff around and find out. It’s going to be one helluva show.

It might be a painful, destructive, anti-American, autocratic, dystopian, infuriating, debasing, and warped reality show that will cause untold amounts of suffering, but that doesn’t seem to matter to a lot of folks. It certainly hasn’t throughout the pandemic.

America loves a good show, apparently even with itself as the plot’s victim.

This column was originally published in the Ohio Capital Journal.

David C. DeWitt is editor of the Ohio Capital Journal, a sister publication of the Nevada Current.