U.S. revenue totaled $30.0 billion in 2020, the lowest since 2003, and the first year-over-year decline since 2014. Gaming revenue in Nevada year-over-year was down about 24 percent, according to date released in late January by the  Nevada Gaming Control Board. Clark County saw a larger decline, a 27.59 percent decrease. The Las Vegas Strip took the biggest hit with a 38.72 percent decrease, significantly higher than the national average.

The decline extends beyond gambling revenue. Live entertainment, tourism, and meetings and conventions — which make up more than half of casino resort revenue on the Las Vegas Strip — have were devastated by the pandemic.

In November 2019, 88 percent of Las Vegas’s hotel or motel rooms were occupied. By November 2020, that figure fell by nearly half to just 47 percent, according to UNLV’s Center for Business and Economic Research.

Less than half as many tourists visited Las Vegas in November 2020 than in November 2019, and fewer passengers volume at Las Vegas’ McCarran International Airport dropped by 59 percent.

Prior to the pandemic, Las Vegas had the second-largest tourism industry in the nation, which employed more than a quarter of the Las Vegas workforce in 2019.

Las Vegas had the fourth highest unemployment rate of all metropolitan areas in the U.S., over five points higher than the national rate in November 2020.

Declines in hospitality and tourism in Las Vegas and Reno led to a broader spillover effect into other sectors causing higher overall unemployment, according to a recent Brookings Mountain West report.

“COVID-19 devastated our business and the employees and communities across the country that rely on casino gaming’s success,” said AGA President and CEO Bill Miller. “We have persevered by leading responsible reopening efforts, supporting our employees, and extending a hand to our communities. Still, these numbers show the economic realities of COVID-19 and underscore the importance of targeted federal relief and ramped-up vaccine distribution to accelerate gaming’s recovery in 2021.”

The year, however, ended with some positive momentum in the fourth quarter, according to AGA, with a 1.7 percent increase in revenue over Q3 2020.

One-in-three American adults plan to visit a casino in 2021, near the highest rate since last March.

U.S. industry revenue was also buoyed by legal sports betting, which garnered an all-time high of $1.5 billion in revenue, up 69 percent year-over-year, and iGaming revenue, which  nearly tripled to almost $1.6 billion, according to the AGA. 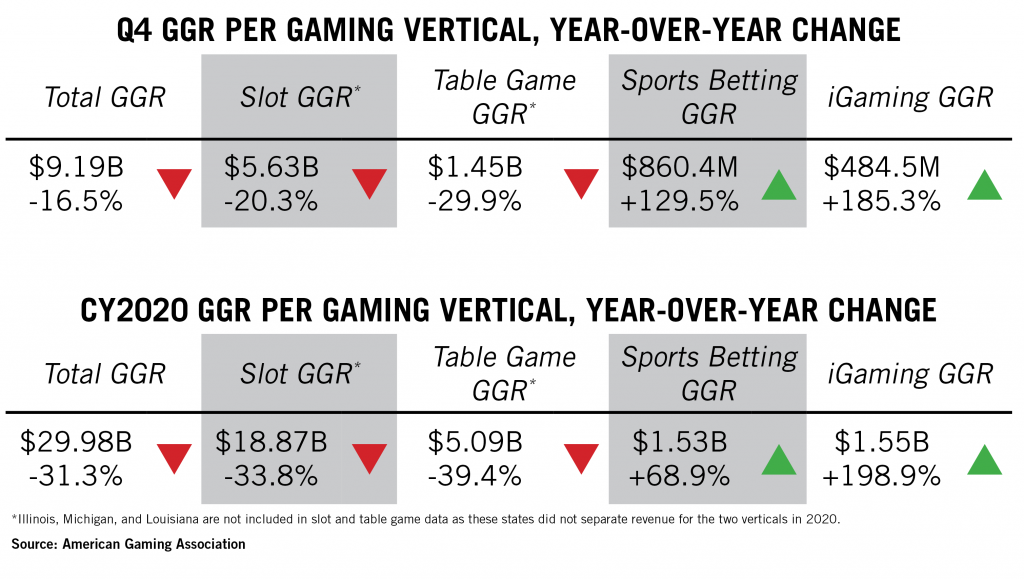