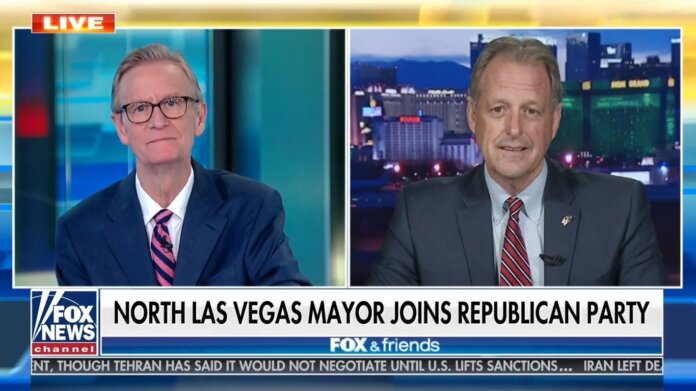 What better way to ingratiate yourself with Donald Trump then to go where the former president turned for his most indispensable daily briefing?

Lee, who is mulling a run for governor, said Democrats, who recently passed massive relief legislation to extend unemployment benefits, provide direct payments and create what is effectively a monthly allowance for families with children, have abandoned working people.

“It all has to with the elitists, and it has to do with the socialists,” said Lee.

Nevada Republicans have been seizing on a slate of candidates backed by Bernie Sanders and the Democratic Socialists of America winning leadership offices in the Nevada Democratic Party last month, and conflating that intra-party, low-participation procedural development to suggest all elected Nevada Democrats are socialists.

In a statement on his campaign website, Lee touted long-held positions — against abortion rights, for guns — and said he voted for Trump twice. He also nods to “cancel culture,” and as in his Fox interview, repeatedly uses the word “socialist,” embracing rhetoric that has become de rigueur in the Trump era Republican Party.

Backing from Trump could prove critical if not decisive in a Republican primary for governor.

Prior to becoming mayor of North Las Vegas in 2013, Lee served several years in the Nevada Legislature. He briefly challenged Steven Horsford for the Democratic nomination for Congress in District 4 in 2012, but instead ended up seeking reelection to his state Senate seat, and was defeated in a Democratic primary by Pat Spearman, who is now serving her third term.

As a legislator Lee often often bucked his party on an assortment of issues, including environmental protection, LGBTQ rights, and raising the minimum wage.

One former Democratic campaign operative indicated Lee would not be missed.

Lee is among only a small number of elected Democrats switching parties to become Republicans since the 2020 election, a group which includes a West Virginia state legislator and a former state legislator in Georgia. Lee’s switch is arguably the most high profile to date, and as his appearance on the former president’s favorite television program indicates, his switch will likely be eagerly embraced by national pro-Trump media.

A star is born. Or so he hopes.