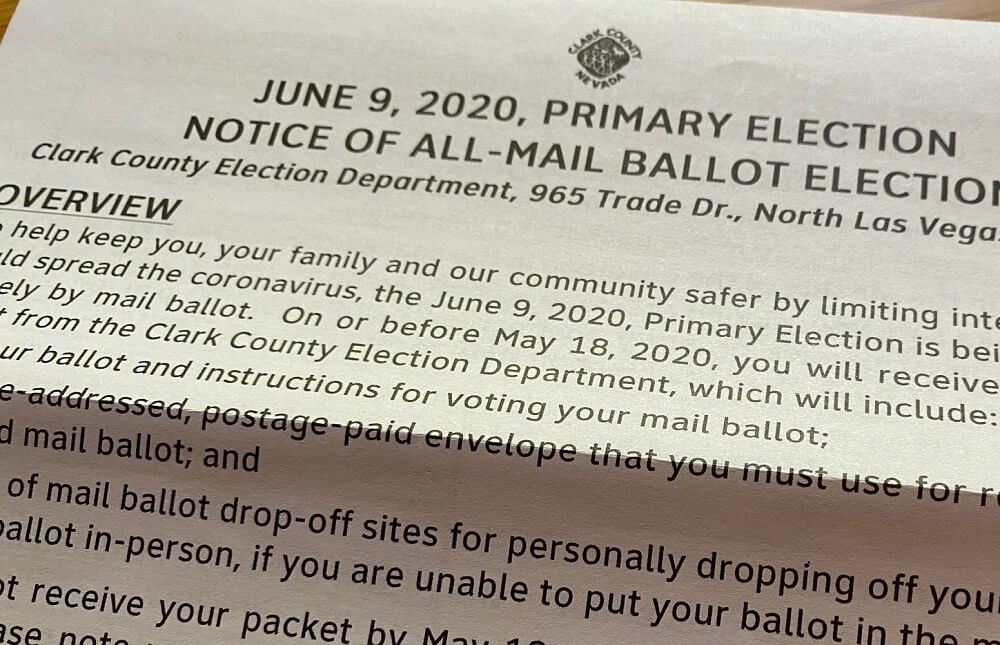 In response to a lawsuit by Nevada Democrats, Clark County plans to expand voter access during the upcoming all-mail primary election.

Clark County will now send mail ballots to all registered voters regardless of whether they are considered “inactive” by the state. The county will also operate three physical polling locations on election day as opposed to just one. The physical polling locations will allow for same-day voter registration and allow for any ballot issues voters may face.

Also being adjusted is the county’s plan for signature curing — the process of correcting any ballots flagged for rejection because their signature is missing or does not match the one on file with the state. Clark County has agreed to reach out to voters within 24 hours of ballot receipt if there is an issue with their ballot.

Finally, the county will train 20 individuals to serve as “field registrars of voters” who can travel and receive sealed mail ballots. These field registrars must include registered Democrats, Republicans and nonpartisan voters.

The changes by the Clark County Registrar meet many of the demands made by the Nevada State Democratic Party, which, along with three national Democratic organizations and four Nevada residents, filed a cleverly named lawsuit in the Eighth Judicial District Court of Clark County against Republican Secretary of State Barbara Cegavske.

In a statement announcing their plans to withdraw their preliminary injunction motion related to the upcoming primary, the Nevada Democrats and their partners praised the concessions: “Nevada’s other county elections departments should follow Clark County’s lead to ensure nobody has to choose between their health and their right to vote.”

Nevada’s primary election is scheduled for June 9. Ballots have already started appearing in voters’ mailboxes in some parts of the state.

The lawsuit as a whole will continue despite the primary election concessions from Clark County. A spokesperson for the Nevada Democrats said the party still wants the court to weigh in on the voter access issues should the general election on November 3 also be held via mail.

EDITOR’S NOTE: This story has been updated to clarify that part of the lawsuit is still ongoing.

Texans go to the polls under sweeping new voting… by Kira Lerner March 1, 2022
Organizers, officials reaching out to voters whose… by Michael Lyle November 11, 2022
Adam Laxalt, Trumpism and the Big Lie: An (updated)… by April Corbin Girnus October 19, 2022